Managing and treating patients with VTE

This is promotional content, intended for UK healthcare professionals only.
This webpage has been developed and funded by the Bristol-Myers Squibb / Pfizer Alliance.

The next few pages focus on the diagnosis, treatment and long-term care of patients with venous thromboembolism (VTE), including the importance of long-term anticoagulation for those at risk of recurrent events.

VTE is a significant burden 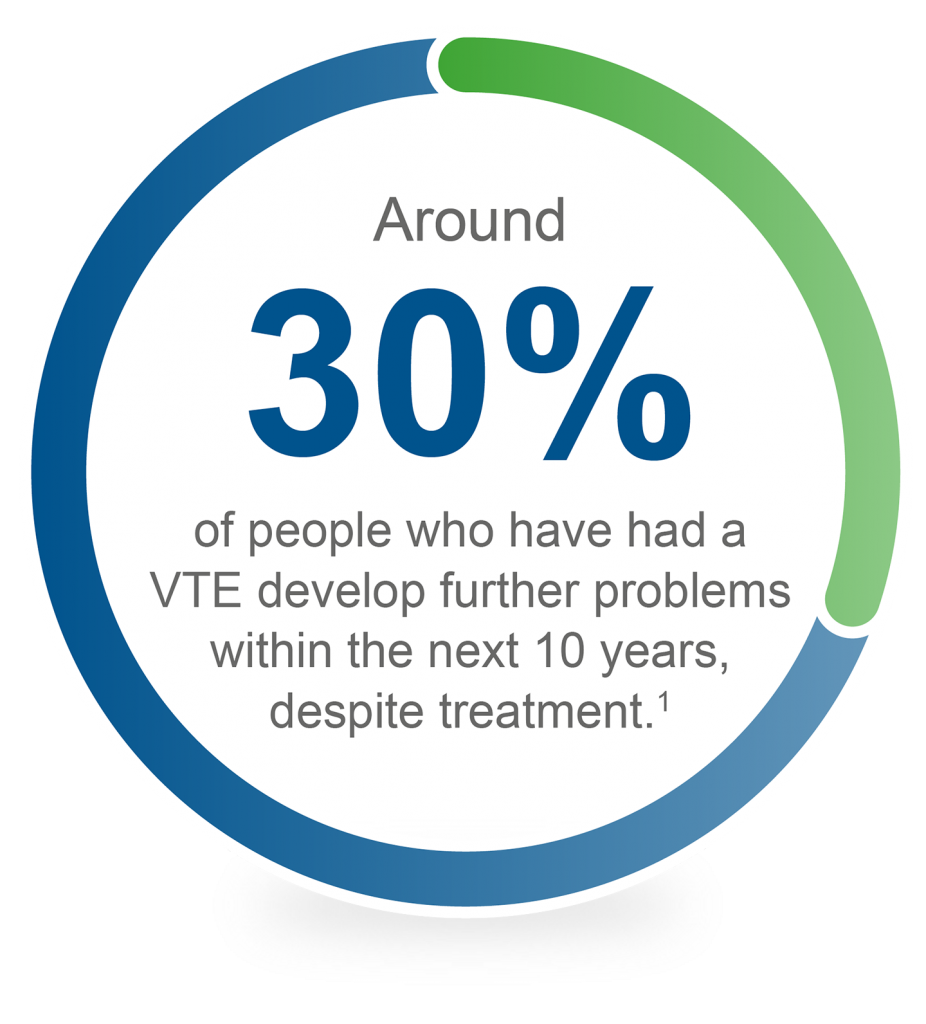 Each year in the UK, up to 1 in every 1,000 people are affected by VTE, comprising deep vein thrombosis (DVT), which affects approximately two thirds of patients with VTE, and pulmonary embolism (PE) with or without DVT, which affects the remaining third.1,2 The major risk associated with untreated DVTs is that about 50% of patients with untreated proximal DVT will develop a symptomatic PE within 3 months,3 with the fatality rate of those suffering a serious PE being around 1 in 10.1

Around 30% of people who have had a VTE develop further problems, such as VTE recurrence or death, within 10 years – even with treatment.1,4 A significant proportion of patients suffer from lifelong morbidity following an initial VTE;4 around 20–50% develop post-thrombotic syndrome after an initial DVT2 and a minority of patients develop chronic thromboembolic pulmonary hypertension (CTEPH) after a PE.4

Many of those affected by VTE already have risk factors such as recent major surgery or a serious illness.1 Continuing anticoagulation treatment after 3 months is less beneficial for people who have had a provoked VTE if the provoking factor is no longer present, because of the lower rate of VTE recurrence compared with unprovoked VTE.5

However, for most people who had an unprovoked VTE and low bleeding risk, it is considered likely that the benefits of continuing anticoagulation treatment after 3 months outweigh the risks. The benefits and risks of continuing treatment long-term need to be carefully balanced and discussed with the patient.5

This link takes you to a third-party website (outside of the Bristol-Myers Squibb Group and Pfizer Group). Bristol-Myers Squibb and Pfizer has no control over the content or management of third-party websites nor can it be held responsible or liable for such content or management. Please make sure the contents therein are suitable for you as per its intended audience and the applicable laws and regulations. It is recommended that you carefully read the legal notice and cookies and privacy policy of third-party websites before accessing these sites.
Continue

This link takes you to a third party website that is part of the Bristol-Myers Squibb Group and Pfizer Group. The Alliance (Bristol Myers Squibb Group and Pfizer Group) recommends that you check whether it is suitable for you as per its intended audience and the applicable laws and regulations before accessing it.
If you wish to continue, click ‘Continue’, otherwise click ‘Stay on this site’.
Continue