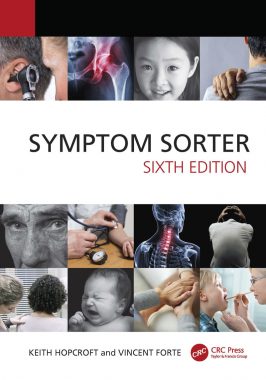 The first in our new series of abridged chapters from the sixth edition of Symptom Sorter, which gives a grassroots analysis of common presenting symptoms in primary care

Dysuria is a very common symptom and the diagnosis and management are usually straightforward. But the cause might not always be ‘cystitis’, especially in recurrent or unresolving cases. Also, genuine repeated infections can be a sign of an underlying problem.

• Peri-urethral inflammation (vulvitis in females and balanitis in males).

• Chemical urethritis (for example, from soap or bubble bath – a common problem but is not usually presented to the GP).

Urinalysis, MSU, swabs and other investigations for STD.

• In a clear case of lower UTI in women under 65 it is reasonable to make the diagnosis – with appropriate safety netting – without urinalysis or MSU.

• Remember peri-urethral inflammation as a potential cause. This is common in children who are often presented as ‘another water infection’ when, in fact, they have balanitis or vulvitis.

• A ‘negative’ (for growth) MSU packed with pus cells is not ‘normal’. There are many possible explanations, including STD, peri-urethral inflammation and TB.

• Re-test the urine after treatment of lower UTI if there is visible or non-visible haematuria, and consider further investigations if the haematuria persists.

• Acute prostatitis is under-diagnosed. Suspect it if a man presents with UTI features plus sudden obstructive urinary symptoms and systemic upset. If managed in the community, these men require two weeks of antibiotics.

• Take care when triaging. Remember that dysuria might be one part of an acute pyelonephritis, so enquire specifically about fever, rigors and systemic upset. These patients will need to be seen and may need admission.

• Remember that recurrent lower UTIs occasionally have an underlying cause. In particular, beware the older patient with little or no previous history of UTIs suddenly experiencing recurrent or persistent problems – there could be an underlying bladder tumour.

• Do not overlook the possibility of an STD, which is commonest in, though not restricted to, the younger age groups. Ask about this possibility, other relevant symptoms and sexual history.

• Investigate children with recurrent or severe UTI according to guidance.

• Unexplained dysuria in children may occasionally be a sign of abuse.

• UTIs are much less common in men – refer for investigation if recurrent.

• Remember the possibility of chronic ketamine abuse in young people.

Dr Keith Hopcroft is Pulse’s clinical adviser and a GP in Basildon, Essex. You can purchase the book here, and use the code SCI20 which will offer you a 20% discount