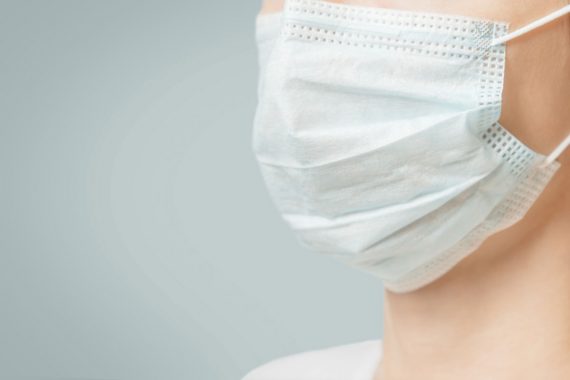 It will no longer be a legal requirement for patients to wear face masks in any setting, the Prime Minister announced today.

In a media briefing this afternoon, Boris Johnson said while the legal requirement for wearing a mask is set to be removed from 19 July, ‘guidance will suggest where you might choose to do so’.

Laying out his plans ahead of next week’s decision on whether to lift Covid restrictions on 19 July, he said the Government planned to ‘change the basic tools that we have used to control human behaviour’.

He said: ‘We’ll move away from legal restrictions and allow people to make their own informed decisions about how to manage the virus.

‘From step four [of the Government’s roadmap] we will remove all legal limits on the numbers meeting indoors and outdoors. We will allow all businesses to reopen, including nightclubs. We will lift the limit on named visitors to care homes and on numbers of people attending concerts, theatre and sports events.’

He added: ‘We will end the “one metre plus” rule on social distancing and the legal obligation to wear a face covering – although guidance will suggest where you might choose to do so, especially when cases are rising and where you come into contact with people you don’t normally meet in enclosed spaces such as obviously crowded public transport.’

He later went on to emphasise that while ministers would ‘retain contingency measures’ for managing the virus during high-risk periods such as the winter, there would be an ’emphasis on strengthened guidance’ and the Government will ‘do everything possible to avoid re-imposing restrictions with all the costs that they bring’.

Covid vaccination certificates will not be required for going to events, added Mr Johnson – but he said businesses ‘can certainly make use of certification and the NHS app gives you a Covid pass as one way to show your Covid status’.

The virus will continue to be managed through the NHS Test and Trace system ‘that is proportionate to the pandemic’, he said, adding self-isolation will be required if the person tests positive or is told to do so by NHS Test and Trace.

Despite Mr Johnson’s plan for mandatory mask wearing to be dropped, England’s chief medical officer Professor Chris Whitty said during the media briefing he would wear one ‘particularly at this point when the epidemic is clearly significant and rising’.

Another trigger for wearing a mask would be when asked to do so ‘by any competent authority’, he said – or lastly if it makes others feel less uncomfortable.

He said: ‘The second situation I would do it [in] is if I was required to by any competent authority – I would have no hesitation about doing that and I would consider that was a reasonable and sensible thing if they had good reasons to do that.

‘And the third thing is if someone else was uncomfortable if I did not wear a mask and as a point of common courtesy, of course I would wear a mask.’

Current Public Health England guidance outlining the requirements around masks states: ‘Face coverings are needed in NHS settings, including hospitals and primary or community care settings, such as GP surgeries.’

The measure was first introduced in June 2020 when face coverings were made compulsory for hospitals and the rule was extended to GP practices.

However, NHS England later clarified GPs cannot refuse to treat patients who present at their practice without a mask, noting it was not in fact a legal requirement to wear a face covering – though the advice was for patients to wear them in enclosed spaces, such as primary care services.

The BMA has called for the Government to keep some ‘targeted’ measures in place when wider restrictions lift – including the requirement to wear a mask in healthcare settings and on public transport.

It has warned that an ongoing ‘alarming’ rise in Covid cases means ‘it makes no sense to remove restrictions in their entirety in just over two weeks’ time’.

Responding to the announcement that wearing face masks will no longer be mandatory from 19 July, BMA council chair Dr Chaand Nagpaul said the emphasis on personal responsibility is ‘incoherent’ as the measure protects others, as opposed to the individual.

He said: ‘This cannot be about “personal choice” when the risk comes from others around you not wearing them.

‘It is inconceivable that the Government would allow for people, many of whom have no choice but to get public transport or be in confined places, to have to take the risk of becoming ill, particularly those who have not been fully vaccinated or cannot take the vaccine for health reasons.’

During the announcement today, Mr Johnson also revealed the plan to cut the interval between first and second Covid doses to eight weeks for all people under the age of 40.

He said the measure was to ensure ‘everyone over 18 should be double-jabbed by the middle of September’.

Health secretary Sajid Javid said over the weekend that there are ‘compelling’ health arguments to lift Covid restrictions on 19 July.

Never was seen as legal anyway. Must be getting in the way of tans, beer and other noxious substances.

Remember lots of people were exempt, for any BS reason they could think of. Robert Jenrick won’t be wearing one because he doesn’t “enjoy” them. What a total total a@£)&)e

Don’t forget, the employer can still impose safety requirements dependent on thier ‘risk assessment’.
If patients are allowed in without masks, I will not go to work.
Any shop can insist on masks if they wish, as it is not a public place in the shop, it is privately owned.
even where Health Centres are in Public ownership, the GP surgery can apply rules to protect staff and other patients – in fact, they are required to apply rules to protect staff and other patients – so let’s see some sensible ones doing so!
This government is just callous, corrupt and uncaring!

We need to see as many surgeries and health centres (as well as supermarkets etc hopefully) as we can, keeping their requirement for mask wearing. Someone needs to do something wise when this government is just playing at caring.
Unbelievable.
Apparently people need to learn to live with covid-19. Apparently wearing masks and keeping a distance from strangers isn’t ‘living with it’?!
Riiiight.
So, ‘living with it’ actually means ‘living with it without attempting personal protection measures, or protection measures for the good of the masses’?
Just ditch all of that then, the virus has gone! Hooray!
Now just watch the cases go up.

This is insane. Would our great representative organisations and “leaders” care to say something about this and shout from the highest roof about how this is WRONG? Masks should remain in place along with social distancing in medical settings and certain in-door settings. Johnson is truly unbelievable and reckless.

Many moons ago I was in a waiting room with my mum, full of people coughing, spluttering, and sneezing in each others faces——–(masks were reserved for bank robbers in those days)——-1952 it was——but, you know everyone seemed to be happy

As independent contractors GPs can set their own rules in their own buildings.
If the coughing sniffling hordes really want to cram into a crowded waiting room then we can insist on them wearing a mask, limit the amount of seating, and make the unmasked wait outside in the rain.
Or not.
And once inside the consulting room, it’s up to the individual clinician to set their own mask rules. (It would be interesting to hear what our Defence Bodies would have to say about this though).
If we’re being given the freedom to use common sense, then we should set our own boundaries based on our individual circumstances/risk analysis.
If the patient doesn’t like it they are free to join another surgery with a mask policy more to their liking.

Bolsonaro and Boris remain. You can fill Wimbledon and Wembley but you don’t reconvene full Parliament. How very very convenient. We are watching you, more than you watch us you realise. The two rules of the land. And the world laughs on. Build back better? – no tourist will come back to the UK whatever gimmick you want to show on screen with case rates and non-existent public health measures.

Agree with the majority of sentiment entirely.
Somewhat disturbed however that no one has challenged the number of deaths we are to expect as a result of this policy. Neatly sidestepped and glossed over on the Monday update.

More concerning was the expectation that the NHS could expect a rise in admissions over the summer in line with a really bad winter flu season and that we could cope because the NHS is an emergency service…… which will be nice for primary and secondary care a like. The limitless resource that just keeps giving!

Let us be very clear on this fact.
This virus can kill you. It is not a gimmick or joke. For the sake of a mojito, tan lines or superiority over nature. It is a pure lesson in how respectful, considerate and sensible you can be.

Let us be very clear on another fact. Face masks serve no useful purpose and that has now been finally acknowledged by politicians.

You lot can wear face nappies for the rest of your lives, if you wish.
Not for me, thanks