Javid says priority is to return country to ‘normal’ 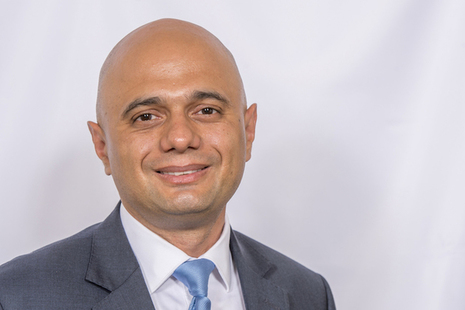 The new health secretary has said that his priority is to return the country to ‘normal as soon and as quickly as possible’.

In a message to broadcasters today, Sajid Javid paid tribute to predecessor Matt Hancock, saying the former health secretary had ‘more to offer in public life’.

Mr Javid said this morning: ‘I just want to start by saying I think Matt Hancock worked incredibly hard. He achieved a lot, and I’m sure he will have more to offer in public life.

‘I was honoured to take up this position. I also know that it comes with huge responsibility. And I will do everything I can to make sure that I deliver for the people of this great country.

‘We are still in a pandemic and I want to see that come to an end as soon as possible, and that will be my most immediate priority – to see that we can return to normal as soon and as quickly as possible.

‘Now, I’ve got a lot of work to do. I’m sure you appreciate that. And if you can excuse me, I’d like to get on with it.’

Last year Mr Javid said that he felt the country should be looking to move out of lockdown earlier to support the economy.

In an interview with Sky – highlighted by its political correspondent Rob Powell– Mr Javid said in May 2020: ‘We’re going to have to co-exist with this virus for I think many months, if not potentially years. But we’ve got to find a way forward and that does mean you’re relaxing, as much as you can.

‘As well as listening to the scientists we also need to think carefully about the impact on the rest of society and the economy and jobs and wider social impacts and that does mean, I think, that when it comes to opening up you want to go as far and as quick as you can.’

Mr Javid has previously been home secretary and chancellor. Like his two immediate predecessors, Mr Hancock and Jeremy Hunt, he is a previous culture secretary.

Before entering politics, he worked in business and finance. Aged 25, he became a Vice President at Chase Manhattan Bank. He later moved to Deutsche Bank in London.

Mr Hancock apologised in his letter to Prime Minister Boris Johnson for breaking guidance. He added: ‘We owe it to the people who have sacrificed so much in this pandemic to be honest when we have let them down as I have done by breaching the guidance.’

I think he meant, “He will have more to offer in PUBIC life.”

extremely bad news for those who are now about to catch death or long-covid due to this bigotted and inhumane policy!
get these murders out of government as soon as possible!
The only way to return to normality rapidly is to stop causing transmission, death and disease by a proper lockdown and eradicatio period, not just keep prolonging the agony.
NHS was not far, a month ago, from being able to start to catch up on essential non-covid work and W/Ls, but policy to allow travel has brought a new wave and closed hospitals again.
No way should NHS be expected to re-open whilst this is rife and endager the lives of HCWs.
Kick out the deadly Tory cronies who take backhanders from big multinational corps and take no notice of proper scientific advice from our own British experts in infectious disease control, and our own historians of the Black Death of 1344!

“He will have more to offer in PUBIC life.”

Reply
Unsuitable or offensive? Report this comment
The Prime Minister 28 June, 2021 10:01 am

All this must be “heartbreaking” for “The Daily Jerk” that prides itself in terrorising GPs and acting as the government’s armoured pet and enforcer (rather than holding the government to account like any reasonable media outlet should do).
Perhaps a new story might leak out that…yes in fact it is ALL THE FAULT OF GPs THAT HANCOCK HAS HAD TO GO……YES A “SECRET” CONSPIRACY BETWEEN EVIL GPs and MI5…..blah, blah….expect another delivery of liquified excrement from “The Daily Nutter”.

…..I doubt very much that lice would take the chance to be honest. Too worried they might catch something from him

Those SOPs are even filthier and more slimey.