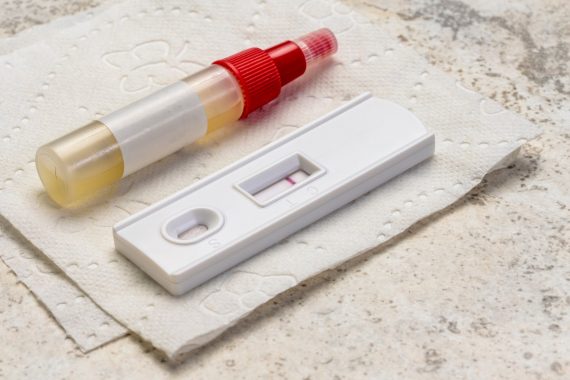 Exclusive GPs have been told they must conduct FIT tests before referring patients with suspected bowel cancer to secondary care, Pulse has learned.

Last year, London GPs were blocked from referring patients with urgent suspected bowel cancer to hospitals based on symptoms alone and without a positive FIT test, under changes to local NHS guidance brought about by Covid-19.

NHS England later said GPs may be asked by hospitals to carry out additional tests when referring patients with suspected or confirmed cancer to help prioritise cases, as part of pandemic measures.

But now, some areas have permanently raised thresholds for two-week-wait referrals for lower gastrointestinal cancer.

This goes against current NICE guidance NG12, which allows GPs to refer patients based on just their symptoms such as a change in bowel habit.

Doncaster LMC chief executive Dr Dean Eggitt told Pulse that mandatory FIT tests have been embedded in referral processes in the area as part of a new eight-page referral form from the South Yorkshire and Bassetlaw ICS Cancer Alliance.

It added that those with a positive FIT result should be referred via the two-week wait pathway, while those with a negative result who ‘do not need’ a referral should be ‘reassured and safety-netted as required’ or referred on ‘an alternative pathway’.

However, patients with a FIT result of between 4 and 9.9 should only be referred if there is ‘strong clinical suspicion and/or evidence of anaemia’ with either low or raised ferritin or with thrombocytosis, the form said.

A referral to gastroenterology ‘should still be considered’ for those with iron deficiency anaemia and a negative FIT result but via a non-cancer pathway, it added.

GPs must confirm that all patients being referred have undergone a FIT test as well as bloods taken within the last three months as ‘mandatory actions prior to referral’, it said.

He said: ‘We try to refer patients but struggle. And for a cancer referral, it’s supposed to be as fool-proof as possible.’

Meanwhile, the process could add an extra week before patients receive a diagnosis, leaving them in a ‘holding state’ in general practice before referral and meaning the two-week wait has effectively ‘gone out of the window’, he added.

Dr Eggitt said: ‘It’s created this holding state of patients who won’t yet be counted because the two-week wait clock doesn’t actually start until you’ve started the referral – which means that it’s going to be held in general practice potentially an extra week whilst we await the result before we refer.’

He told Pulse: ‘Everyone is just overwhelmed with workload and they’re trying to reduce the workload for the specialists by asking the GPs to do it.

‘That just means that we’re doing what everyone else needs to do in hospitals – we take the history, do the examination, what else can fit into general practice? We can’t do everybody’s jobs for them.’

In Essex, a cancer update sent to practices in April said that guidance was changing to say that ‘all lower GI two-week wait referrals will need to have an accompanying FIT’.

The NHS Basildon and Brentwood CCG update, seen by Pulse, said: ‘Previously FIT was only for patients that were “low risk but not no risk”. However, emerging evidence has indicated the importance of FIT in refining the patient pathway in addition to emerging evidence around FIT and patients with rectal bleeding.’

University of Exeter professor of primary care diagnostics Professor Willie Hamilton told Pulse that ‘quite a few’ areas have moved to asking GPs for FIT tests on two-week wait referrals as well as ‘lower-risk’ patients.

He said: ‘This “FIT them all” policy was sensible in the era of restrictions on colonoscopy/imaging resource and may indeed be sensible after the pandemic delays have abated.’

However, he added that ‘many things need to be sorted out’ if this were to become a long-term pathway, such as what FIT level requires onward referral and whether it is a ‘patient or GP-friendly’ pathway.

GP cancer experts have previously warned that a negative FIT test result does not rule out cancer altogether.

But a study published in July concluded that GPs can confidently avoid secondary care referrals for colorectal cancer investigation for patients with a negative FIT result.

Cancers will be missed as a result

At the moment, the local path lab says that FIT cannot be relied on in the presence of Iron Deficiency Anaemia.

Reply
Unsuitable or offensive? Report this comment
Cezary Klejnotowski 26 May, 2021 10:29 am

it is very sad how specialists play the game with GPs,
What Hippocrates would say in this situation?

Reply
Unsuitable or offensive? Report this comment
terry sullivan 26 May, 2021 11:12 am

gps must learn to say no

Certainly did have the balls to say NO in our CCG.

Currently can refer as per NG12 and will undertake FIT to help stratification only. Might even add bloods if generous too.

Interesting fact though, adding FIT hasn’t reduced our colonoscopy rate, in fact regardless of % FIT requested/results with 2WW referral colonoscopy rate hasn’t changed much, slightly increased if anything

I have the numbers (6 months worth) if of interest??

Reply
Unsuitable or offensive? Report this comment
Richard Greenway 26 May, 2021 11:34 am

False negative rate of FIT tests around 10%
This will deny those 10% from timely referral if they have suggestive symptoms.
Doesn’t sound safe

Surely you mean FOB tests?
(Faecal Occult Blood)
GPs do not have the facilities to fit-iest patients for level 4 PPE face masks, which is what the FIT-test is!
Not to be confused with LFD (NOT LFT) test for Covid, or Beta HCG, which is what the picture shows, eh?

Show the workings: if FIT is 100% sensitive then OK. If not, and without sharing anything resembling sound clinical reasoning, then of course it’s not ok.

I thought FIT test are a screening test and NOT a diagnostic test – so I will not stop a TWR referral just because of a negative FIT test.
Last referral I did required a FIT test- so given to patient but was in parallel with the TWR referral.

Nah. Ignore this. If a hospital rejects it, and they get cancer, the buck will end with them. PERIOD.

That’s fine. But why can’t the hospital organise the test and explain to the patient why they can’t have their colonoscopy despite national guidance. I don’t see why this has to fall to us and why our leaders have let this happen – again

As Colonoscopy is not a very nice procedure, not without risk and often done on rather debilitated patients, isn’t it not a bad idea to have a bit more info before embarking?
If however this is against the guidance from NICE then is it also reasonable to know by name who is advising otherwise? As already noted the buck does stop elsewhere.

I don’t think this is particularly shocking.

If they have good evidence that the relevant symptoms with a negative FIT test do not reach the risk threshold then it would make sense to reflect that in the algorithm.

Unless smearing the debris of a gloved PR exam onto the test-kit counts (unlikely in this Age- of-Pt-Not-Examined), GPs do not perform FIT tests – the patients do.

So what if the Pt says ‘Do what? No thanks’.

I have serious concerns as I have clear examples of 3 patients with diarrhoea as the main symptom and negative FIT turning out to be two pancreatic cancers and other a neuroendocrine tumor.

The problem is people with lower GI symptoms with or without anaemia do not have only bowel cancer and people are being discharged after a normal colonoscopy at my local hospital without investigating the symptoms further. The care should be holistic.
This will lead to missed cancers as it has done.