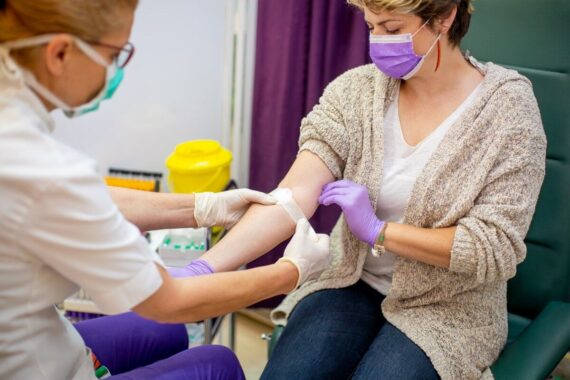 A new blood test could help GPs diagnose ovarian cancer faster and more accurately, according to research from the Universities of Manchester and Exeter.

Research recently published in the journal Cancers found the simple blood test particularly effective for women under the age of 50.

It works by identifying a protein in the blood, known as the human epididymis protein 4 (HE4), which can more accurately detect ovarian cancer than standard tests.

Currently, women with suspected ovarian cancer undergo a blood test. If a high amount of a protein known as CA125 is found in their blood, they will be referred for further tests.

However, nine out of ten women with high levels of CA125 will not have ovarian cancer since raised levels of CA125 can occur during menstruation and pregnancy or can be caused by conditions such as uterine fibroids and endometriosis.

The researchers investigated whether measuring levels of another protein, HE4, would provide more diagnostic accuracy for ovarian cancer.

By analysing blood samples from 1,229 patients over 12 months, they found that HE4 levels – when examined alongside the current CA125 test – could improve the detection rate of ovarian cancer, particularly in women under the age of 50.

Ovarian cancer is the sixth most common cancer in the UK and almost one in five new diagnoses are in women under the age of 50.

The new test will mean that women can avoid unnecessary and often invasive tests and procedures, such as physical examinations and biopsies.

Study author and academic clinical fellow in general practice at the University of Manchester Dr Garth Funston said: ‘While our results require validation in a much larger sample, these findings are extremely promising.

‘We know that the current blood test we use to investigate symptomatic women for ovarian cancer in primary care – CA125 – is less accurate in younger women.’

He added, ‘Ovarian cancer is notoriously difficult to diagnose at an early stage, as symptoms are often non-specific, including bloating, pain and feeling full quickly after eating.

‘We hope our research can contribute to a change in how quickly ovarian cancer is identified. This is especially exciting as there has been little progress towards developing more accurate ovarian cancer testing approaches for use in primary care.’

In 2019, a large study found that ovarian cancer test CA125 is ten times more effective at spotting ovarian cancer in women with symptoms than previously thought – around 10% effective rather than 1%.