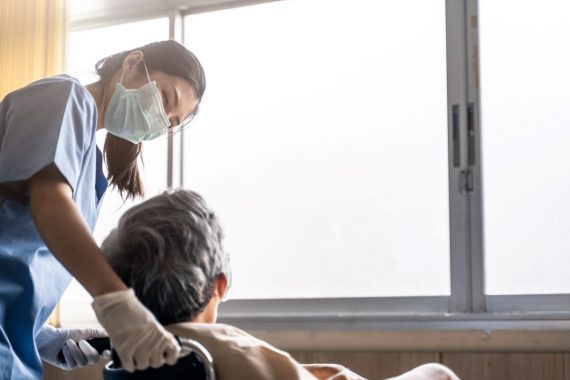 Early pandemic policy to discharge patients into care homes in England without testing them for Covid was unlawful, the High Court has ruled today.

Judges found that the Government ‘failed to take into account the risk to elderly and vulnerable residents from non-symptomatic transmission’.

Their barrister highlighted to the judges that 20,000 care home residents had died from Covid in England and Wales between March and June 2020.

A judgment summary said: ‘The judges found that it was irrational for the DHSC not to have advised until mid-April 2020 that where an asymptomatic patient (other than one who had tested negative for Covid-19) was admitted to a care home, he or she should, so far as practicable, be kept apart from other residents for 14 days.’

This came despite the Government’s chief scientific adviser Sir Patrick Vallance raising concerns about the risks in a radio interview as early as 13 March. Levels of risk had also been outlined in papers from late January, the document said.

The court dismissed the claimants’ case – brought against both the Government and NHS England – that the policies breached human rights under the European Convention on Human Rights.

In a statement made outside the court, Dr Gardner called for Prime Minister Boris Johnson’s resignation, the BBC reports.

She said she ‘believed all along that my father and other residents of care homes were neglected and let down by the government’.

‘The High Court has now vindicated that belief, and our campaign to expose the truth,’ she added.

Dr Gardner’s father Michael Gibson died on 3 April 2020 while living in a care home in Oxfordshire, while Ms Harris’s father Donald Harris died on 1 May 2020 after an outbreak in his care home.

Covid boosters over 90% effective in adults 50 years and over, study shows

Sadly its not just the government at fault.
Our local Nursing Home was covid free, then their managers said they could not run empty beds so needed to get them filled. Soon 2 covid cases led to multiple infections and numerous deaths!