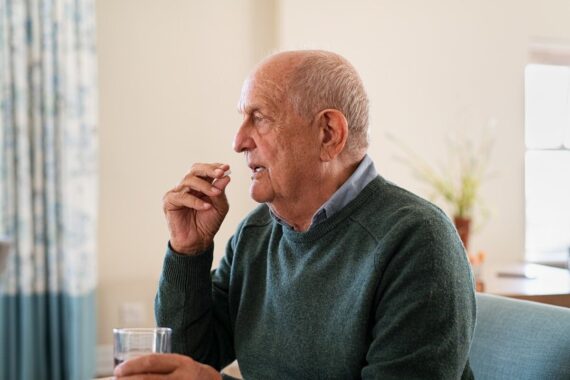 Antipsychotic prescribing to dementia patients in care homes rose by over 50% on average during the pandemic, new research has shown.

The research team, led by the University of Exeter and King’s College London, compared current prescribing rates from the Covid-19 iWHELD study with pre-pandemic data from a similar care home cohort study, with over 700 residents evaluated in each study.

They found that overall, the number of people with dementia receiving antipsychotic prescriptions had soared from 18% to 28% since 2018, with prescription rates of over 50% in a third of care homes.

Professor Clive Ballard, professor of age-related diseases at the University of Exeter, was part of a national campaign to reduce antipsychotic prescribing by 50% in 2009. He said: ‘Covid-19 put tremendous pressure on care homes, and the majority of them must be applauded for maintaining relatively low antipsychotic prescribing levels amid incredibly difficult circumstances.

‘However, there were very significant rises in antipsychotic prescribing in one third of care homes and we urgently need to find ways to prioritise support to prevent people with dementia being exposed to significant harms.’

Dr Richard Oakley, associate director of research at Alzheimer’s Society, said the study shows the ‘shocking and dangerous scale of the use of antipsychotic drugs to treat people with dementia in care homes’.

He added: ‘Alzheimer’s Society has been campaigning for a move away from the model of “medicate first” and funded research into alternatives to antipsychotic prescriptions, focused on putting people living with dementia at the centre of their own care.

‘This drug-free, tailored care can help avoid the loss of lives associated with the harmful side effects of antipsychotic medications.’

In 2018, a study found that patients with dementia may be able to come off antipsychotics without any adverse behavioural effects.

Figures covering the year since the pandemic began showed there were 363,000 fewer drugs for dementia issued than would have been expected based on historical trends.

Meanwhile, NHS figures from last month showed small increases in the prescribing of antipsychotic medicines, as well as a small rise in drugs for dementia.

Dementia patients may be able to come off antipsychotics, study suggests

Antidepressant prescribing rises for sixth year in a row