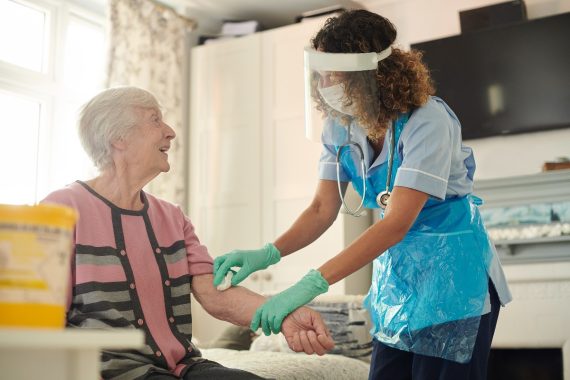 People with dementia who see the same GP have lower rates of complications – such as delirium – and fewer emergency admission to hospitals, a study has shown.

The analysis of one year of anonymised medical records of patients with dementia in England found that those who saw the same GP most often had 34.8% of delirium, 57.% less risk of incontinence and 9.7% reduced risk of emergency admission compared with those who had the most variation in GPs treating them.

They were also more likely to have polypharmacy issues and potentially inappropriate prescribing, according to the researchers who divided the patients into quintiles depending on how often they saw the same GP.

This included included being prescribed fewer loop diuretics in patients with incontinence and benzodiazepines that come with a high falls risk, the researchers concluded in the British Journal of General Practice.

Using data from 2016, the study included people with dementia who visited a GP at least three times in the previous year.

Study lead Dr João Delgado, a research fellow at the University of Exeter, said the number of people with dementia had been rising steadily and was now one of the leading causes of death in the UK.

‘Treating people with dementia can be complex, because it often occurs together with other common diseases.

‘Our research shows that seeing the same general practitioner consistently over time is associated with improved safe prescribing and improved health outcomes.

‘This could have important healthcare impacts, including reduced treatment costs and care needs.’

Dr Richard Oakley, associate director of research at Alzheimer’s Society, noted that the study made it clear that for patients with dementia consistently seeing the same GP had real benefits.

‘The pandemic has put GP services under immense pressure, so while we might not be able to get consistent GP care for everyone with dementia tomorrow, policymakers should absolutely be working with the NHS to build this into their plans as we emerge from the pandemic.’

Everyone in the whole world will see this as a reason to stop the fragmentation of primary care, promote smaller surgeries and remove some of the excessive red tape which makes continuation of care impossible.

Apart from the Department of Health. They will see this as needed a comissioned service put out to tender where the same provider can be in charge of delivering care by the same experienced GP. The winner of the tender process will be someone who is focussed on delivering a low quality service so that they can quote low enough to win the tender and still make a profit. Then they will fail to get the right staff and cite problems with national recruitment difficulties – and tick the box saying the same ‘provider’ delivered the care even though it was a different locum each week.

Box ticked, cheque cashed and off to spend all the money.

Groundbreaking. But let’s still work at scale. Works for big business. Big pharma likes polypharmacy, why get in their way?