BMA backs motion calling for all doctors to have Covid jab 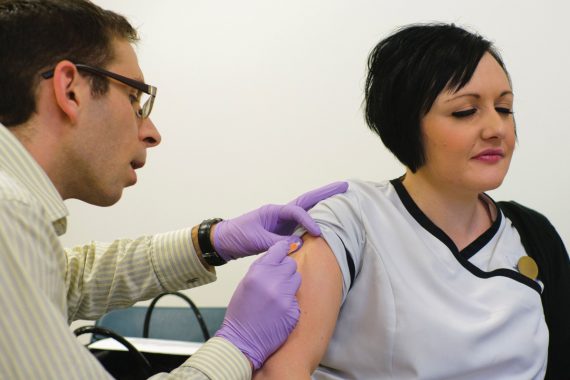 The BMA has backed a motion calling for ‘all doctors’ to be vaccinated against Covid.

The motion, which was up for debate at today’s Annual Representative Meeting (ARM), passed with a majority of around three quarters of the vote.

Proposed by the BMA’s Islington Division, the motion said: ‘This meeting believes that all doctors should be vaccinated against Covid-19, unless there is a medical contraindication.’

It comes as the Government last week launched a consultation on whether to make Covid and flu jabs ‘a condition of deployment’ for frontline NHS workers in order to protect patients.

Proposing the motion, BMA council member and consultant Dr Jacky Davis said argued that doctors have a ‘responsibility to persuade everybody to get vaccinated’ and ‘cannot plead with others to do that if we refuse to get vaccinated ourselves’.

She also said mandatory vaccination for doctors ‘should be a last resort, but has to be an option’.

However Kent LMC member and GP Dr Zishan Syed argued against the motion on the basis that it would give the Government the ‘green light’ to make vaccination compulsory for doctors.

Dr Syed, who is also a member of the BMA’s GP Committee, added that if vaccination is made mandatory, it should be made mandatory for all rather than via a ‘two-tier system that discriminates against doctors’.

Another GP, Dr Deborah White of Cleveland LMC. stressed that the motion says the BMA believes all doctors ‘should’ be vaccinated, rather than that they ‘must’.

‘But it says that we believe all doctors should be vaccinated and I’m not sure how as doctors we could not believe this. If we don’t believe it, what does that say about our confidence in these vaccinations?’

BMA council chair Dr Chaand Nagpaul said the wording of the motion ‘is acceptable to the association’ and that the BMA already ‘supports’ the position put forward.

The Government has already made Covid vaccination mandatory for staff working in care homes, including visiting GPs.

And NHS England said last month that GPs should have ‘one-to-one conversations’ with any member of practice staff who has not had both doses of the vaccine.

Other motions passed at the ARM to date included a motion calling for a ‘major review’ of regulation processes because they ‘discriminate against BAME doctors’.

Another called on the BMA to reject proposals to establish a medical apprenticeship scheme ‘outright’ and lobby instead for ‘increased accessibility for financial support’ for students was passed in full.

Motion by ISLINGTON DIVISION: That this meeting believes that all doctors should be vaccinated against Covid-19, unless there is a medical contraindication. PASSED

Motion by CONFERENCE OF LMCS: That this meeting believes that the professional regulatory processes discriminate against BAME doctors and demands a major review of the system. PASSED

Motion by LONDON REGIONAL COUNCIL: That this meeting is deeply concerned by proposals to establish a Medical Apprenticeship Scheme that will lead to a two-tier system for medical professionals. This meeting calls on the BMA to:-

i) reject these plans outright, particularly the ability of local employers to determine entry standards of medical students, apprentice or otherwise; PASSED AS A REFERENCE

ii) lobby for increased accessibility for financial support by way of bursaries, grants and subsidised tuition fees instead of apprenticeships; PASSED

iii) propose the inclusion of extracurricular roles such as healthcare assistant (HCA) which are remunerated to financially support undergraduates; PASSED

All these motions in a dry ocean, make me nauseated. Motion sickness they call it, but there’s no movement forward, just wheel spinning. Should, could, would, but can’t enforce that without a lawsuit. You’re no police of people’s lives. So what you going to do after, mandate flu jabs and pneumococcal? What about herpes and shall we all take some PrEp. Please, will DoH mandate the public to get it by law, clearly not. Or the DoEduc or what about Defence? And the public still come in mask off and kicking in the door for a sore throat. Please. Doctors are fed up with being asked to be the holy Saint and biblical figure. The perfect puppet of society, which no one gives a dross about. Is there someone in NHSE or GovUk within the BMA? Be good investigative journalism. Maybe a relative of the Daily Smell or Wally. I remember when ward sisters said take your watch off, and throw your water bottle away, you’ll spread infection. Shame about the white coats, that was a clever inside job.

Vaccine refusers are making a seriously poor judgement, but what sort of union is it that tries to force it’s member’s out of their jobs?

What next? The BMA tackles the national shortage of kidneys for transplant by insisting all doctors should donate a spare kidney or lose their job?

There is no doubt that clinicians will have caught and passed on Covid whilst working – notably in hospitals but also in primary care eg in nursing homes. We already have to have Hep B and I remember before going to Medical School having to have a raft of vaccinations prior to entry. There is minimal personal risk so not sure I see what the problem is, particularly if already mandated for colleagues working in care homes. Bit like the argument about seat belts.

“GPs should get vaccinated” is about as useful a statement as “GPs should be healthy, wealthy and wise”.

If they are proposing that unvaccinated GPs be removed from face to face patient contact, they need to say this. Otherwise their proposition is just empty words.

its called fascism–remember–politicians work for us

so allegedly does the bma