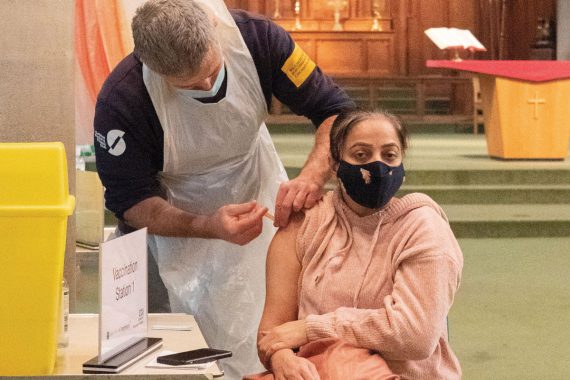 Eligible patients who have not yet had a Covid vaccine they are entitled to are being urged to come forward in the next few days before slots dry up.

NHS national medical director Professor Stephen Powis called on people to come forward before 29 March if they qualified for a jab before appointments slow ahead of the roll out of second doses.

NHS England said some GPs were calling each of their unvaccinated patients personally to encourage uptake. Text invitations are also being sent out.

More than 3.5 million doses had been given in the week up to Sunday – a new record – he added.

‘It is a testament to the careful planning and sheer hard work of staff that the NHS vaccination programme is continuing to protect people against coronavirus at a record pace’, Professor Powis said.

Figures show seven in ten people aged 50 to 54 years have now had their first dose of Covid-19 vaccine, while over half of the adult population have had at least one vaccine dose.

But Covid vaccine supply is set to see a ‘significant reduction’ from 29 March that is forecast to last four weeks.

The BBC has reported that the reduction in supply is partly due to a four-week delay in the delivery of five million doses of the Oxford/AstraZeneca vaccine from India.

It comes as research shows that more than four in five people who were previously unsure or had refused a vaccine would now take up the offer or already had done.

However, NHS England told Pulse that PCN-led sites should keep booking patients from the first nine priority groups for both first and second doses

UCL’s Virus Watch study of more than 46,000 people in England and Wales found a consistent drop in vaccine hesitancy across all ethnic groups.

Researchers reported that 87% of white British adults who were hesitant about taking a Covid-19 vaccine in December 2020 went on to change their mind and plan to take, or have already taken, a vaccine by February 2021.

The figure was 90% among adults from South Asian backgrounds and 88% in adults from Black backgrounds, they found. The shift could also be seen across levels of social deprivation.

But the team did find that 25 to 35 year olds were almost nine times more likely to intend to refuse a Covid-19 vaccine last month compared with the over 75s.

Study co-lead Professor Rob Aldridge from the UCL Institute of Health Informatics, said more and more people were now wanting to get vaccinated.

‘Our work shows the importance of making repeated offers of the vaccine because so many people have changed their mind in recent months.

‘Getting vaccinated should be made as easy as possible over the coming months with clear information and advice provided by trusted community leaders including younger adults as they become eligible for vaccination.’

Is this just another attempt to counter the vaccine-decliners that Government seems to be over-obsessed about at the moment?
Worst DNA episodes around here are caused by isolation/contact events or by MVCs hijacking the patients previously booked into GP imss clinics.