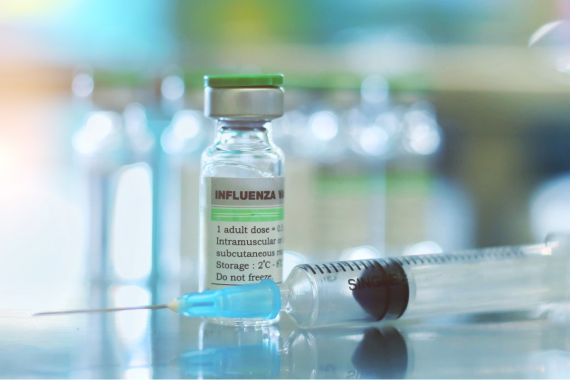 GPs are having to cancel hundreds of flu jab appointments due to vaccine delivery delays of ‘up to two weeks’.

In an email to GP practices, Seqirus, the UK’s biggest supplier of flu vaccines, said the delay was due to ‘unforeseen road freight challenges’

Practices have been told not to book any clinics until they have received confirmation from Seqirus a week prior to delivery.

In response, the BMA has called for the Government to hold a Cobra meeting about flu vaccine delays and blood test tube shortages.

The email from Seqirus said: ‘We realise that this unfortunate change could require you to reschedule planned influenza vaccination clinics and would like to reassure you that we are working hard to allow you to plan with certainty.’

BMA GP Committee chair Dr Richard Vautrey said the vaccine delay ‘is likely to affect a significant proportion of practices, and have a serious impact on both practice workloads and most importantly, patients’.

He said: ‘Many practices will have spent the last few days and weeks meticulously planning for their flu vaccination programme, inviting and booking patients in for their jabs, only now to have to contact them all again to cancel or reschedule appointments.

‘This causes a huge increase in staff’s already unsustainable workloads, and inconvenience and unneeded anxiety for patients who will be keen to be protected ahead of winter.’

Warning that this comes ‘on top of the chaos already being caused by the shortage of blood test bottles, which is leaving hardworking doctors and practice teams bearing the brunt of understandable frustrations from patients when the problem is well outside of their control’, Dr Vautrey said it ‘is not acceptable for government to be leaving these issues to clinicians and NHS management when clinicians and NHS management have no levers to resolve them’.

And he added: ‘That this appears to be stemming from similar issues around freight capacity and transportation [as the blood test tube shortage] is incredibly concerning, and we must ask the Government exactly what it is doing to urgently address this.’

Speaking to the BBC on the weekend, BMA vice chairman Dr David Wrigley said his practice had been expecting 5,500 flu vaccines to be delivered, with staff members ‘physically shaken’ at the news that all those appointments would have to be rescheduled.

He said: ‘We know there’s difficulties with HGV drivers so why are we not getting these flu jabs to the practices so we can get them into our patients’ arms and protect them?

‘We’re hearing nothing from our politicians and the BMA is actually calling for the Government to have a Cobra meeting because within the space of two weeks we’ve seen two major crises of cancellation of blood tests and now flu jabs.’

He added that it is ‘grossly unfair to patients and staff who have already made arrangements’.

Posting on Twitter, Watford GP Dr Simon Hodes said he had ‘890 patients to rebook’, and speculated whether the ‘road freight challenges’ Seqirus referred to were related to Brexit.

A Seqirus spokesperson said: ‘Seqirus recently communicated to GP practices in England and Wales informing them of a one to two-week delay of scheduled vaccine delivery.

‘This notice was sent to our customers to allow them the reschedule their influenza vaccination clinics whilst we resolve the delay which is related to a range of unexpected logistical challenges including transportation difficulties.’

And, without further explanation, the statement added: ‘It is important that the reporting of the delays to the influenza vaccine deliveries is separated from reporting of delays experienced in other sectors due to driver shortages.’

However, the company was quoted in the Times saying: ‘The delays are linked to unanticipated transportation challenges, including the driver shortages.’

Dr Gary Howsam, vice chair of the RCGP, said the delay ‘is news we really didn’t want to hear’.

He said: ‘General practice and the entire NHS are dependent on the smooth roll-out of the winter flu vaccination programme. It cannot fail.’

This year’s record-sized flu vaccination programme is due to target 35 million people across the UK, the Government announced in July.

However, it has been mired in confusion as PCNs are still awaiting guidance on Covid vaccine boosters, having initially been told to expect to co-administer these with flu jabs.

Meanwhile, the Government said last month it was in ‘ongoing’ discussions with flu vaccine suppliers over whether a central stock will be provided for this year’s expanded programme.

Practices were previously advised they would not have access to Government-procured stock – leading to warnings from GPs that their own supplies of jabs may run out.

It comes as GPs have been under instruction since last week to cancel all blood tests except those that are ‘clinically urgent’ until 17 September, due to a shortage of test tubes that NHS England said was still worsening.

Having told GPs to start flu jabs early, Government could have fixed this issue if they wanted to.
Clearly they would rather see GP staff demoralised and the NHS primary care system broken down.
This is on top of giving all those staff a pay cut in real terms.

The NHS ship is well and truly sinking. Not just postponing patient vaccinations, but 1 weeks notice about when Flu-vaccines are to be delivered giving us the usual short notice to book and deliver. Discounts on Sequris price for delays and failure of contractual obligations – not a chance?