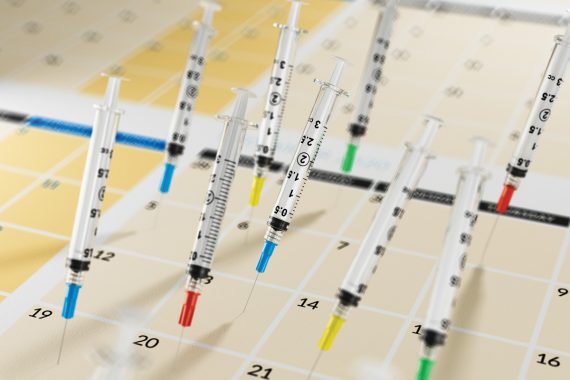 GPs will receive double the supply of vaccinations they are currently receiving, plus vaccines to carry out all the scheduled second doses, NHS England has said.

GP leaders welcomed the increased supply, saying they will deliver ‘quadruple’ the number of vaccines if needed.

Earlier this week, a letter from NHS England revealed that Covid vaccine supply to GP-led sites is set to double from 15 March and remain at a high level for ‘several weeks’.

Another NHS England letter sent to PCNs this week has clarified that this does not include deliveries for second dose clinics, which have started being delivered separately.

The letter said there would be a ‘substantial increase’ in the volume of vaccine available as part of the ‘forthcoming vaccine supply for first doses’.

It added: ‘The Government now expects vaccine supply for new first doses to increase substantially over the weeks of 15, 22 and 29 March.

‘Every site should expect to be able to receive, and use swiftly in each of these weeks, around twice the level of vaccine supply previously available with precise details to be confirmed shortly on a site-by-site level.’

NHS England added that ‘many sites have keenly anticipated an increase in vaccine supply to allow them to operate at maximum capacity’.

Lancashire GP partner Dr Russell Thorpe, who chairs the Lytham St Annes PCN meetings, told Pulse that practices in his area had been ‘worried’ they wouldn’t get enough vaccine supply.

‘We realise that the country is up against it and we’ll do whatever it takes.’

Dr Thorpe added: ‘If they say “we’ve got loads of vaccine, do you want it?” The answer is “yes please”.

‘All we need is more vaccines, so [this is] great news.’

And Dr Kevin Barrett, clinical director of The Grand Union PCN in Hertfordshire, said it ‘shouldn’t be an issue’ to double the number of vaccines his PCN is currently delivering.

He said: ‘Most PCNs and sites will have been operating at about 50% of maximum capacity anyway, partly because of vaccine supplies but partly because they have planning to do second doses alongside new first doses too.

‘It means us going from opening three or four days a week to opening six or seven days a week, which is what we’ve got the staff and capacity to do.’

Meanwhile, the letter added that patients’ second and first doses can now be booked at the same time going forward.

It said: ‘All future second dose deliveries will be made 11 weeks after the corresponding first dose, allowing appointments to be booked accordingly when making first dose bookings.’

It also confirmed that second dose stock can be used to give first jabs to those in priority groups if there are ‘spare doses’.

It said: ‘Second dose delivery schedules have been shared for the first three weeks of March.

‘If sites find that they have spare doses having delivered the relevant second doses, then these should be given as new first doses to eligible priority cohorts.’

It follows a pledge from NHS England’s chief executive in January that patients due their second Covid vaccine dose will be prioritised for existing supply within the 12-week window.

The letter also said that PCNs should invite anyone not yet vaccinated in cohort five – which other vaccination settings were leading on – from 15 March.

PCNs should move onto cohort seven – the over 60s – only after they have offered a jab to all patients in cohort six and ‘followed up where invitations aren’t initially taken up from across cohorts one to six’, it added.

It comes as NHS England has announced that the delivery of second Covid vaccine doses will be supported by a national campaign encouraging the public to get their jab.

The Government’s ambition is for all adults in the UK to have been offered a first dose of a Covid vaccine by the end of July.

Whilst I agree with the sentiment that “if they give us the tools, we will do the job” I do have concerns about the impact on the increased demand on staff to achieve these higher numbers. QOF suspension ceases at the end of this month and there are indications from my CCG that other relaxations on requirements will also disappear. How do the enthusiasts feel they can achieve the higher numbers without impacting the stability of practices, both clinically and financially?

Run well, there is enough profit in covid clinics presently that I think we could stop worrying about QOF. It stacks up financially – although CQC will be upset that we can’t do this and covid and sweep the floor (presumably with the broom stuck you know where) all at the same time. It doesn’t make for good medicine – but then very little of what we are paid / forced to do does.

Im sorry they suddenly want us to double our work-load for something which is outside GMS.
Im afraid a 1% payrise, only gets a 1% increase in work from me!