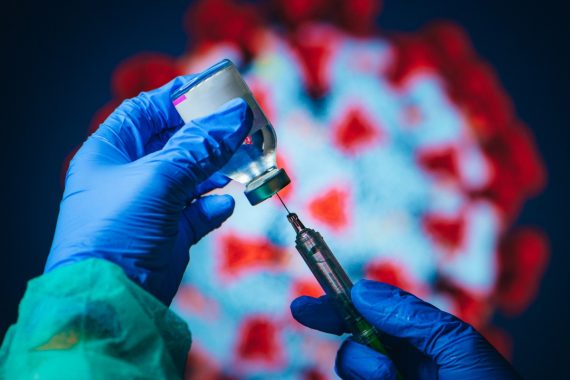 A single dose of the Pfizer vaccine is 90% effective from 21 days after vaccination, a new study has suggested.

This seems to support the UK’s delay of the second dose to 12 weeks, the researchers claimed.

However, it remains unclear how long immunity lasts beyond 21 days without a second jab.

Official guidance changed on 31 December to say all second vaccine doses should be given after 12 weeks instead of three weeks to maximise the number of people protected against Covid-19 in the shortest possible timeframe.

Some GPs had decided to honour second-dose appointments already made but NHS England later said this was banned.

Now a University of East Anglia (UEA) study, which is not yet peer-reviewed, has re-analysed data from the Pfizer vaccine’s rollout in Israel to estimate its effectiveness over time.

It found that a single dose provided ‘very high’ protection of 90% against the virus after 21 days, without a second dose within the 21 days recommended by the manufacturer, according to the pre-print paper.

Lead researcher and Covid-19 expert Professor Paul Hunter said this ‘supports the UK policy of extending the gap between doses by showing that a single dose can give a high level of protection’.

He added: ‘Whilst we do not know how long this immunity will last beyond 21 days without a second booster, we are unlikely to see any major decline during the following nine weeks.’

Professor Hunter told Pulse that although we can’t be ‘certain’ that immunity will not decline between 21 days and 12 weeks, immunity levels ‘don’t decrease that quickly for anything’.

He said: ‘We don’t know for certain that that will last for a very long time but with all the other information that we have about natural infection with Covid, the Oxford/AstraZeneca vaccine and vaccinations to pretty much every other viral disease that you could wish to name, [we think] that’s going to last at least six months with that sort of level and certainly it’ll last well enough to your second dose.

‘There’s been a lot of criticism of the increased gap, but very little of that criticism has come from people who work in infectious diseases.’

He added in a UEA press release that there were ‘a number of flaws’ in a recent paper based on the Israeli data – also not peer-reviewed – which reported that a single dose of the Pfizer vaccine may not provide adequate protection.

He said: ‘They did not attempt to estimate the effectiveness of the vaccine from day 18 onwards. This would have given a better indication of how effective a single dose of the vaccine could be if the second dose was delayed by up to 12 weeks.’

The new UEA study showed that the risk of infection ‘doubled’ in the first eight days after vaccination, but then declined to low levels by day 21.

Professor Hunter suggested the initial increase may be because people become ‘less cautious’ after receiving the vaccine.

He added: ‘We found that the vaccine effectiveness was still pretty much zero until about 14 days after people were vaccinated.

‘But then after day 14, immunity rose gradually day by day to about 90% at day 21 and then didn’t improve any further. All the observed improvement was before any second injection.’

Dr Peter English, consultant in Communicable Disease Control, former editor of Vaccines in Practice Magazine and former BMA Public Health Medicine Committee chair, said the study does ‘not provide any direct evidence’ that a single dose will be effective for up to 12 weeks.

He said: ‘The preprint (and the source data it relies on) do not provide any direct evidence that the efficacy of a single dose of vaccine will continue up until 12 weeks.

‘[However,] they do support the efficacy of a single dose of vaccine, show that it takes about three weeks for the full benefits to accrue, and the lack of any sign of diminution of efficacy up until 24 days is reassuring.’

The conclusion that effectiveness rose from near zero at day 14 to around 90% at day 21 ‘before levelling off is ‘robust and useful’, he added.

It comes as another study has suggested that the Oxford vaccine also shows ‘sustained protection’ of 76% during the 12 weeks between doses.

The studies follow tensions with medical professionals and the BMA regarding the Government’s decision to lengthen the interval between first and second doses of the vaccines.

Meanwhile, the Government has today launched a new study on the interchangeability of Covid vaccines with a view to making the vaccination programme ‘more flexible’.

That is why one day of politics is too long 😈
(1)When the government first announced that both Pfizer and AZ vaccines are to be repeated only in 12 weeks , Pfizer wasted no time immediately to announce that they would not support a 12 week-interval .
Understandable in terms of covering their back side in medico-legal dimension.
To be honest , I was holding my own argument that patients were giving their consents based on consultations advising 21 days for 2nd dose . Obviously, this argument is becoming obsolete once the carpet policy of all 2nd doses was implemented at 12 weeks .
Of course , this article was based on this yet to be peer-reviewed re-analysis in East Anglia (UEA) study. One would wonder what and how Pfizer would like to respond .
In terms of immunology and virology , I can see where the argument comes from as far as the CMO and JCVI using previous knowledge on various viruses are concerned. But the opposite side would challenge that this is a virus which has proven that it is way beyond traditional expectations. In the spirit of Karl Propper’s falsifiability, ongoing scientific researches with humility are what necessary .
(2) In the context of political judgement, the reputation government is already well destroyed by being too late and too indecisive in critical moments last 12 months . The government cannot afford any more U-turn , especially in this arguably only ‘success’ story of vaccination so far in the pandemic under its watch ; the Chinese saying: decree in the morning, change it in the evening (朝令夕改）
So one can also see why the CMO vigorously defend the 12 week rule .
(3)Nevertheless, the row between UK and EU against the backdrop of post Brexit , is likely to continue behind curtains. I would not be surprised that this latest ideology of interchangeable vaccines for 1st and 2nd doses(study under way) will be announced by the CMO in not too far future . 😈