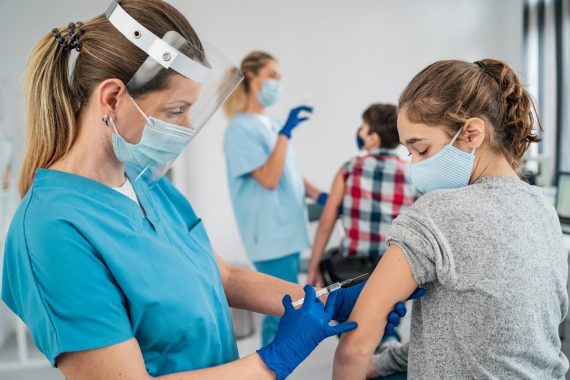 The health secretary has set out a new target for all 16-17-year-olds to be offered their first Covid vaccine dose by Monday next week, in a bid to allow them to build immunity before they go back to school two weeks later.

People in the age group can get vaccinated at one of more than 800 GP-led local vaccination sites or via NHS England walk-in centres, the Government said. Those aged within three months of their 18th birthday can also use the National Booking Service website or phone 119 to book their jab.

NHS England primary care director Dr Nikki Kanani said 16-17-year-olds should ‘check their nearest walk-in centre on the site finder today or book through their GP team once invited to do so’.

She added: ‘Now as teenagers prepare to head back to school or college or into their first full-time jobs, once again NHS staff are doing everything they can to offer young people the lifesaving vaccine as quickly as possible to protect themselves and others.’

Health secretary Sajid Javid said: ‘I have asked the NHS in England to ensure they offer a first dose of the vaccine to everyone aged 16 and 17 by next Monday 23 August, this will make sure everybody has the opportunity to get vital protection before returning to college or sixth form.’

The Government accepted new Joint Committee on Vaccination and Immunisation (JCVI) advice for 16-17-year-olds to become eligible for one dose of a Covid vaccine on 4 August.

The JCVI has not yet finalised advice for 16-17-year-olds will get their second dose of vaccine. At the time of the announcement, it said the ‘the aim’ is for this to be ‘from’, but not necessarily at, 12 weeks following the first dose.

The delay takes into consideration a very rare side effect that has been observed among young people, but the JCVI also said this delay would ‘extend protection for a longer period’.

US regulators recently issued a warning of rare heart inflammation following Pfizer and Moderna jabs, but it still recommends that children are vaccinated.

But it added that because Covid is ‘usually mild in younger people’ it is ‘important to weigh up the benefits of any vaccine against the possible, although extremely rare, side effects’.

Therefore, ‘prioritising the first dose and delaying the recommendation on the second, allows the JCVI to provide the best available advice with the latest available information for the second dose, whilst providing some immediate protection from severe disease’, they said earlier this month.

Vulnerable over-16s should already have been offered vaccination as part of the earlier phases of the vaccination campaign.

It comes as, earlier this month, YouGov polling showed that vaccine hesitancy is in decline among young people, with just 11% of 16-17-year-olds saying they would not have the vaccine. Among 18-21-year-olds, hesitancy now stands at 5%, according to ONS data published on 9 August.

The vaccination campaign has now prevented more than 23 million Covid infections and around 85,000 deaths in England, according to Public Health England figures released last week.

Divide every target by 2, and that’s what the rest of the world does. In paid systems.