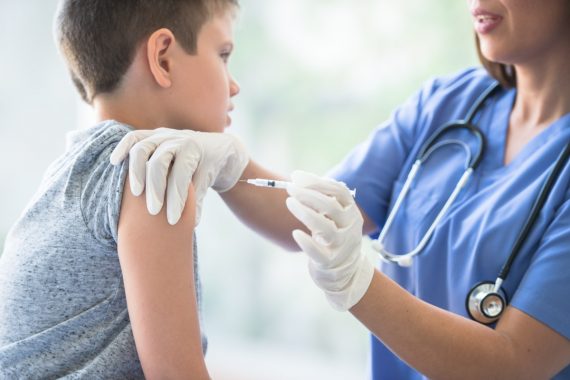 The UK’s chief medical officers (CMOs) have recommended that all children aged 12-15 are given a first dose of the Pfizer Covid vaccine.

In response, the Government said it would set out its decision ‘shortly’.

The UK’s CMOs were asked to review universal Covid vaccination for 12-15s after the JCVI stopped short of recommending expanding the rollout to all healthy children in the age group.

In a letter to the four UK health ministers, sent today, the CMOs said: ‘The view of the UK CMOs is that the additional likely benefits of reducing educational disruption, and the consequent reduction in public health harm from educational disruption, on balance provide sufficient extra advantage in addition to the marginal advantage at an individual level identified by the JCVI to recommend in favour of vaccinating this group.

‘They therefore recommend on public health grounds that Ministers extend the offer of universal vaccination with a first dose of Pfizer-BioNTech Covid-19 vaccine to all children and young people aged 12-15 not already covered by existing JCVI advice.’

They added: ‘If ministers accept this advice, UK CMOs would want the JCVI to give a view on whether, and what, second doses to give to children and young people aged 12-15 once more data on second doses in this age group has accrued internationally. This will not be before the Spring term.’

The CMOs also considered the impact of vaccination on mental health in this age group, as well as ‘operational issues such as any possible negative impact on other vaccine programmes’, the letter added.

Their final decision was informed by representatives of various medical bodies including the RCGP, as well as data from the Office for National Statistics (ONS) and published data on the impact of Covid-19 on education, it said.

A Department of Health and Social Care (DHSC) spokesperson said: ‘We have received advice from the four UK Chief Medical Officers on offering Covid-19 vaccination to young people aged 12-15.

‘We will set out the Government’s decision shortly.’

It was reported last week that chief medical officer (CMO) for England Professor Chris Whitty was this week expected to back universal vaccination of 12-15s on the grounds that it would ‘improve their mental health, social life and education’.

Earlier this month, the JCVI recommended that the list of underlying health conditions making 12-15s eligible for vaccination should be expanded, but said it did not recommend a universal offer.

The JCVI advised that the ‘health benefits’ to healthy 12-15s of vaccination are ‘marginally greater than the potential known harms’ but that the Government should ‘seek further input from the CMOs on the wider impacts’, including the impact on schools.

The Government accepted the JCVI’s advice on expanding eligibility and confirmed it had asked the four UK CMOs to review the decision, taking into account other aspects that are outside the remit of the JCVI.

In a briefing this afternoon, both the JCVI and CMOs stressed that there was ‘no conflict’ between the JCVI’s and CMOs’ recommendations.

During the same briefing, CMO Professor Chris Whitty highlighted that the balance of benefit versus risk of vaccination for this age group was more finely balanced than in older age groups.

And he said it would be ‘very important’ that this is ‘communicated fairly and properly to children, young people and their parents so that they can make a considered decision’.

He also said ‘colleagues in general practice, and in paediatrics and child health, will work with colleagues in public health to try and help make sure that that balance of understanding is presented in an appropriate way’.

Health secretary Sajid Javid previously confirmed that he had ‘asked the NHS to put preparations in place to roll out vaccinations to 12-to-15-year-olds, should it be recommended by the CMOs’ – and that parental or carer consent will be sought.

He also previously said that the jabs would be administered by school vaccination teams, as well as at other locations including GP vaccination sites, to ensure full coverage across the country.

Where was the concern about children’s schooling last year?