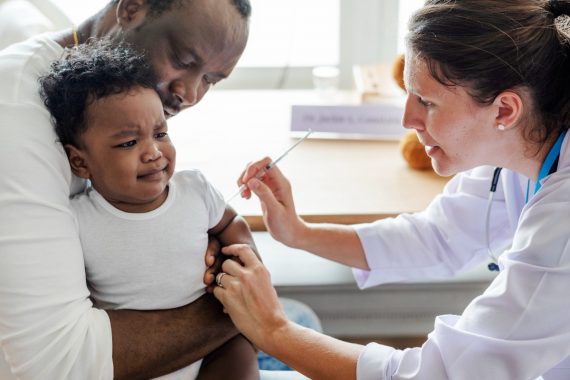 The uptake of MMR vaccine in England remains just below the World Health Organization target of 95% after falling slightly on last year’s figures, data shows.

Vaccination rates for other childhood diseases continue to show strong uptake, the figures from Public Health England show, which officials said was testament to the hard work of primary care staff during the pandemic.

By the age of five, 94.3% of children had received two doses of the MMR vaccine, which had also fallen slightly from 94.5% the previous year.

National coverage of the five-in-one vaccine for diphtheria, whooping cough, tetanus, polio and Hib remains over 95% as it has done every year since 2011, PHE said.

There is regional variation, PHE said, with 97.2% of children in the North East having the five-in-one vaccine by the time they were five but only 91.2% in London – the only region where the target was not met.

That vaccine was replaced by the six-in-one jab that also includes hepatitis B in 2017, NHS Digital said.

Dr Mary Ramsay, head of immunisation at PHE, said: ‘The current levels of vaccine coverage are a testament to the hard work of frontline colleagues, in spite of the pressures caused by the pandemic.

‘However, many children are still behind on these important jabs – it is vital that we maintain the highest possible uptake, as even a small decrease can have a big impact on public health and could cause a resurgence of serious and sometimes life-threatening diseases.

JCVI recently expressed concern over a decline in pandemic vaccination, including MMR, although these data also included teenagers.