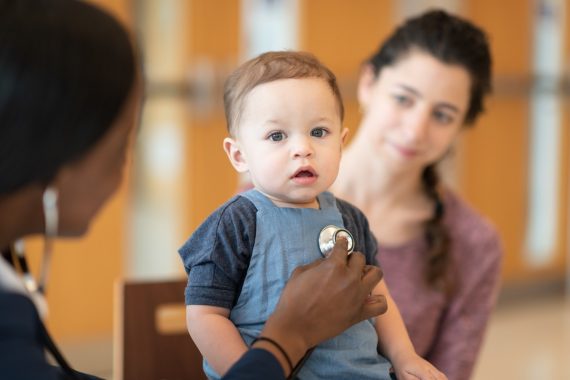 Researchers warned it cannot accurately detect those who need to go to hospital and those who can be safely managed at home.

In the analysis of more than 6,700 children, 31.6% would have been classed as ‘red’ if GPs had followed the traffic light algorithm which would have meant urgent referral to hospital.

Yet using the red category as the cut off would have missed 41.2% of the children who had serious illness but who were deemed as amber.

In actual fact the prevalence of serious illness in this group of acutely unwell children presenting to general practice was only 0.3%, the analysis showed. Overall, 139 (2.1%) children were admitted within seven days of their initial presentation

Combining red and amber improved the sensitivity to 100% but this would have meant sending 94% of children to hospital, the researchers noted.

Researchers said the traffic light system had been around for about 15 years and was likely to be a routine part of many GPs practice and training, yet had never been validated in UK primary care.

Writing in the British Journal of General Practice, they concluded that while it was created to help GPs confidently assess unwell children, and make decisions about who to refer and who to send home, the study has shown ‘that it is unable to accurately achieve this’.

Speaking with Pulse, study lead Dr Kathryn Hughes, a GP and senior clinical lecturer at Cardiff University said as a GP you try to follow guidelines and best practice and she had always assumed the tool was fairly accurate.

‘We did find that a lot of children were categorised as red – and clearly the system won’t work if GPs sent that many children in to hospital. But in actual fact, in our cohort, GPs sent less than 2% children to hospital suggesting that they’re not fully following the traffic light system anyway.

‘NICE do say that those who are amber should also be considered for hospital admission – and when we combined the red and amber categories, no children were missed, but this would mean sending 94% of children to hospital – with only 6% categorised as green which is clearly not workable or helpful for GPs.’

She added that it did seem shocking that the tool was rolled out to such an extent without validation in the population most likely to use it. There were also implications given the current strain on GPs due to the Covid-19 pandemic, she noted.

‘The next step is to find a tool which can accurately identify the majority of children who can safely be managed at home and also identify those children who may have a serious illness needing assessment in hospital. We either need to find an existing tool which works well in a general practice setting or develop a new one.’

Given the general practice population is so different to those who would be seen in emergency departments, it may be necessary to develop a completely new tool using GP data rather than relying on tools developed in secondary care, she said.

This is the traffic light. No GP required.
Is your child worse?
Yes.
Go to A+E.
Done.
Everyone wins, child gets the best outcome.

Dear All,
Most NICE guidance for primary care is written by committees who have little if any GP input and hardly ever have any GP data to base them on.
Always take with a pinch of salt.
Regards
Paul C