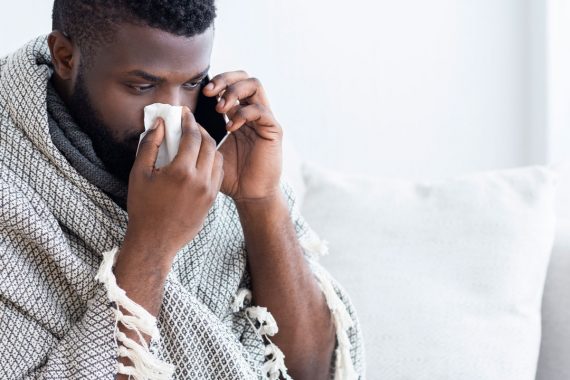 Exclusive The Government’s out-of-date advice on Covid symptoms that should trigger a PCR test could be causing around 20,000 cases a day and needs to be changed urgently, a leading researcher has warned.

Speaking with Pulse, Professor Tim Spector, who heads the ZOE Covid study at King’s College London said the picture is ‘now fairly clear’ that the most common symptoms among those now testing positive are nothing like when the pandemic began.

‘It’s the wrong message and it’s not a joke, it’s killing people,’ he told Pulse.

The ZOE Covid study was first launched in March 2020 and tracks infections using an app with millions of users.

According to the app, the traditional symptoms of cough, shortness of breath, and fever rank way down the list in vaccinated adults and unvaccinated children.

Instead the virus is presenting more like a regular cold with runny nose, headache, sneezing and sore throat leading the way. ‘One in two people with a positive PCR test across the country lack any of the three government approved symptoms,’ he said. ‘We’re missing lots of cases.’

Data on changes to presenting symptoms as a result of the Delta variant has been available since summer when the Government confirmed to Pulse it would not be changing its guidance.

Professor Spector expressed great frustration at the apparent bureaucracy behind a lack of updated guidance when other countries have adapted to the symptoms presenting now.

‘We’re being told to look for the wrong symptoms and not allowed to get a PCR test. I’ve been told PHE are on the verge of changing things for six months. No one seems to know whose job it is to do this in the Department of Health.’

Of the traditional symptoms, only loss of smell or taste remains in the top five for those testing positive for Covid-19, he adds.

‘Runny nose, headache, sneezing, sore throat and loss of smell and taste – these are the things people should be looking out for at the moment.

‘A sore throat is a really characteristic part of the picture, which you don’t always get with colds. We’re trying to tease that apart. Anecdotally people are saying it’s a very sharp pain but we don’t have hard data on that yet.’

He added that the recent announcements on the booster vaccine programme and winter plan would have been the perfect time to inform the public that things had changed.

‘Every other country I’ve been to or talked to has it in their guidelines so we have to ask why we’re so special. I went to Spain and saw posters everywhere saying Covid presents differently now.’

He said lack of testing capacity was the original excuse for not updating the list but that should not be an issue now.

‘I was told we’d have too many people getting tests but we have more testing capacity than any other country in Europe.

‘We’re doing lots of asymptomatic testing at the moment and it should be much more targeted.

‘People having these symptoms and then going to work and spreading it around is probably contributing 20,000 cases a day.’

A Department of Health and Social Care spokesperson said: ‘Since the start of the pandemic we have acknowledged Covid-19 has a much longer list of symptoms than the ones used in the case definition and experts keep the list of symptoms under review.

‘With around one in three people not showing symptoms of Covid-19, we have made regular, rapid testing available twice a week for free for everyone in England.

‘LFDs have identified over 760,000 positive cases that would not have been detected otherwise.’

Top five symptoms in vaccinated adults and unvaccinated children, according to the ZOE study:

Supporting refugees at the Ukrainian border

What is killing people is a cover-up.

simple really lower the bar by offering the real list of symptoms and the numbers will sky rocket !!
Number 10 wants packed bars aeroplanes restaurants cinemas stadia and everything back to normal — certainly doesn’t want home working shielding furlough
As numbers rise will 2′ care be overwhelmed who knows but lower numbers by not altering the symptom triggers suits them just fine