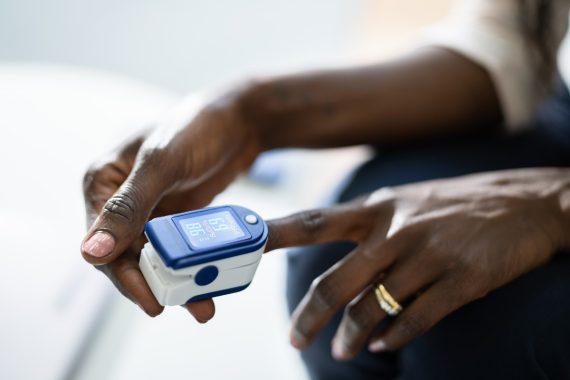 The Government has announced that it has commissioned a review into the health impact of possible race and gender bias in medical devices, including pulse oximeters.

Pulse oximeters are used to detect early signs of dangerous reductions in oxygen levels, with all 16-64s testing positive for Covid who are not double jabbed becoming eligible for NHS England’s GP Covid ‘Oximetry @home’ scheme in September.

Under the scheme, those with symptoms measure their oxygen saturation levels with a pulse oximeter for monitoring by their GP practice.

The rapid review will assess ‘potential’ race and gender bias in the ‘design and use’ of all medical devices and whether bias could have prevented patients from receiving appropriate treatment, the Department of Health and Social Care (DHSC) announced today.

It said: ‘The independent review will look at devices such as oximeters – used to measure oxygen levels – to identify potential discrepancies in how they work for different ethnic groups. As part of this, the review will consider whether existing regulations mean there is a systemic bias inherent in medical devices.’

This comes after research concluded that darker-skinned patients are at ‘greater risk of inaccurate results from oximeters due to a tendency to present higher levels of oxygen in their blood’, it added.

The rapid review will launch ‘shortly’ and initial findings are expected by the end of January, with an independent chair to lead the review to be announced ‘in due course’, the DHSC said.

He said that the bias is ‘unintentional’ but ‘exists’ in numerous devices used by the NHS.

When asked whether he believed people had died of Covid as a result of bias in medical devices, Mr Javid said this could ‘possibly’ be correct.

‘A lot of these medical devices are put together in majority-white counties and I think this is a systemic issue’, he added.

Responding to the announcement, the BMA called for a ‘requirement that all research and development of medical devices are based on testing them on people of different ethnicities before production’.

BMA council chair Dr Chaand Nagpaul said: ‘We support a review of medical devices on their accuracy for different ethnicities, given there is already evidence in clinical papers and within the NHS Race and Health Observatory report, Pulse Oximetry and Racial Bias, suggesting issues with poor pulse oximeter readings in people with dark skin.

‘This means that important clinical decisions – in some cases of critically ill patients – are being made on readings that may not be accurate.’

Dr Nagpaul said that racial bias in medical education must also be addressed, for example in dermatology training where students are shown ‘images of skin conditions only on white skins when they can appear very differently on darker skins’.

He added: ‘Clinical trials and research often do not have diverse cohorts which can result in drugs that do not work as well on other ethnicities.

‘These unacceptable disparities result in health inequalities, which when combined with a range of other socio-economic factors, severely disadvantage large numbers of people in our community.’

In August, NHS England updated its guidance on oximeters after emerging evidence suggested that pulse oximeters produced ‘inaccurate and ambiguous readings’ for people with darker skin.

And a September update to the guidance said that while the MHRA has identified that skin colour can affect the ‘accuracy’ of pulse oximeters, the regulator is ‘not aware of any incidents where skin colour has had an adverse effect on the use of pulse oximeters when providing effective clinical care’.

It added: ‘Wherever possible it is recommended that patients record a baseline oxygen saturation at onboarding, and subsequent changes in saturation readings are then compared to this established baseline.’

It comes as GP practices are set to receive 4,000 pulse oximeters bought by NHS England to support child oximetry and help GPs assess children with respiratory conditions over the winter.

Meanwhile, a Government review into the disparities in risks and outcomes of Covid-19 published in June 2020 found that the risk of dying from Covid is higher in Black, Asian and Minority Ethnic (BAME) groups than in white ethnic groups.

And the Government’s long-awaited Covid-19 risk algorithm identified a black, Asian and minority ethnic (BAME) background as one of the top risk factors in October last year.

A version of this story was first published by Pulse’s sister title The Pharmacist.