No update to budesonide guidance as study confirms Covid efficacy 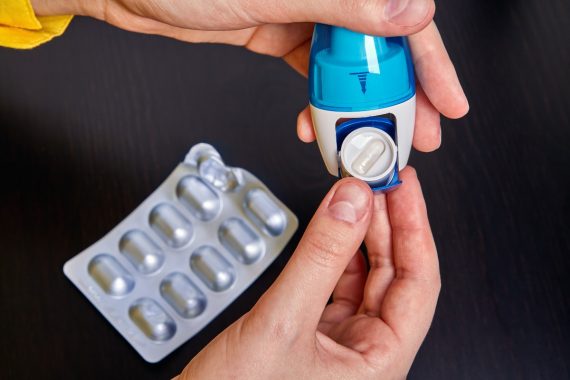 Results published in The Lancet have confirmed the benefit of inhaled budesonide in Covid recovery in higher risk patients in the community.

But the Department of Health and Social Care (DHSC) said advice to only prescribe the treatment on a ‘case by case’ basis remains in place for now.

It is understood that NICE are reviewing the evidence from the PRINCIPLE trial, which first published interim results in April.

The Lancet paper confirms that use of budesonide in over 65s or over-50s with high risk conditions who had tested positive for SARS-CoV-2 recovered 2.94 days sooner than those who had usual care.

There is also a ‘chance’ that the drug reduces hospital admissions or deaths with a 2% lower rate in those who were treated but the results did not quite reach the pre-agreed threshold for superiority, the researchers reported.

The final results are in line with those published as an interim paper in April but do not cover other endpoints that had been reported such as patient wellbeing.

Inhaled budesonide was the first treatment to show effectiveness outside the hospital setting.

Recruitment to the budesonide arm in the Oxford University run PRINCIPLE trial was stopped in March after it was agreed that enough patients had been enrolled to assess if the treatment was effective.

Participants were asked to inhale 800 micrograms of budesonide twice a day for 14 days and were followed-up for 28 days.

The initial positive reports prompted the DHSC to advise GPs they could prescribe budesonide on a case-by-case basis but said it was not being recommended for routine use as more evidence was needed before it could be rolled out wider.

Eligible patients must have had onset of Covid-19 confirmed by PCR test within the past 14 days and have ongoing symptoms and be 65 years and over or 50-64 years with a comorbidity consistent with a long-term health condition from the flu list.

A Department of Health and Social Care spokesperson said: ‘These are promising results and we will wait for the experts at NICE to consider any revisions to the clinical guidelines.

‘Until then, clinicians can prescribe this treatment to certain patients on a case-by-case basis, using their individual judgement.’