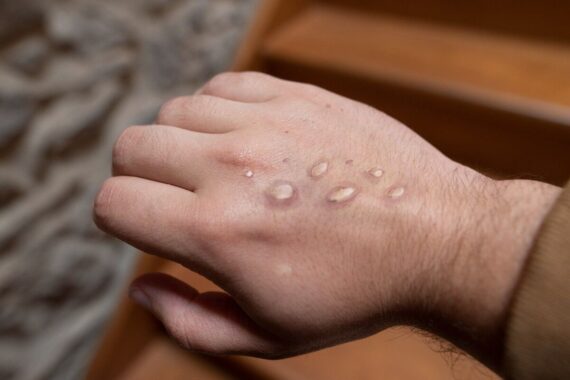 NHS England has urged patients not to visit their GP if they have monkeypox symptoms.

Anyone with symptoms consistent with monkeypox infection should also avoid going to A&E.

Instead, patients have been told to contact their local sexual health clinic, or phone 111, and limit interactions with other people.

The advice came with the announcement that London would see an acceleration of the rollout of the monkeypox vaccine.

The vaccine is available in clinics across the country. But the capital – which has seen the highest number of infections – will receive additional doses of the existing supply in an effort to break the chains of transmission as quickly as possible.

Individuals who are most likely to get the virus are being prioritised. That includes eligible gay, bisexual or men who have sex with men (GBMSM) and frontline staff at greatest risk of exposure.

It also includes those who have been in close contact with a confirmed case, in line with the UK Health Security Agency (UKHSA) advice.

He said: ‘Managing monkeypox is putting a significant burden on services – already facing high demand – given the additional time needed for assessing patients and applying infection control, which in turn is impacting other areas of sexual health care delivery.’

On 19 July, UKHSA announced that they had procured more than 100,000 additional vaccine doses with the first 20,000 set to be delivered for use by the NHS in August.

Thousands more people who are eligible in London will now be contacted over the next few weeks about getting their jab.

NHS director of vaccinations Steve Russell said people should wait to be contacted about a vaccine and, when invited, come forward at the earliest opportunity possible.

‘Thousands more people will be invited very shortly with the number of clinics expanded too, and as we have done with the most successful COVID vaccination programme in history, the NHS will leave no stone unturned in ensuring everyone who is eligible can get protected,’ he said.

Over the coming weeks, the number of clinics across the country offering a pre-exposure vaccination will expand.

At the end of July, a new list of clinical symptoms was identified by UK researchers.

GPs will not lead monkeypox vaccine programme for those at risk

Go to Soho and the nightclubs instead. Loving it. Covid and monkeypox don’t exist. More the merrier.