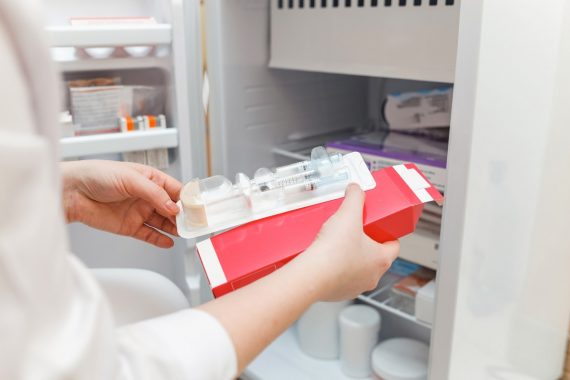 Exclusive ‘Tens of thousands’ of excess doses of the Astra Zeneca Covid vaccine risk being wasted when they expire over the next week, Pulse has been told, as NHS England admitted planned collections were ‘seriously delayed’.

NHS England began asking vaccination sites for data on excess doses in May, and has since advised that it would ‘collect the vaccine and hope to move it internationally’, a GP whistle-blower told Pulse.

But GPs have now been told that a delay with MHRA approval has held up the process, they said, although it remains unclear what specific approval is needed.

The GP, who wished to remain anonymous, said that the jabs have not been used due to the policy of offering under-40s an alternative vaccine to mitigate the risk of blood clots.

They further claimed that thousands of doses are due to expire this and next week, but that NHS England promises to collect them have not materialised and they now risk being binned.

An email from NHS England’s South East team, sent last night, thanked GPs for their ‘ongoing patience and understanding regarding the seriously delayed AZ pick up’.

It said that the first batch of ‘excess’ doses had already been collected but that vaccination sites that had missed out had been ‘guaranteed that their excess would be picked up in the second “mop up” round’.

The email, seen by Pulse, was sent to CCGs in Frimley, Kent and Medway, Surrey Heartlands, Sussex, Buckinghamshire and Hampshire, Southampton and the Isle of Wight but said that the issue was being raised by ‘every other region in England’.

The regional team has been informed by the national team that ‘the plan is in place and ready to go but has unfortunately been held up by ministers at Government level’, it added.

It said: ‘It is of great disappointment to all concerned that we are still waiting for an update on when this will take place.

‘We have raised the issues this is causing sites at every daily call we have had with [the National Vaccination Operations Centre] – as has every other region in England – but unfortunately there is still no sign of a resolution.

‘It is a shame that a matter such as this has turned into a political issue but I know the national team are just as frustrated as we are and doing everything they can to push for Government sign off as quickly as possible.’

A Sussex GP, who wished to remain anonymous, told Pulse that there are 50,000 vaccines in fridges across the area.

They said: ‘The reason this has happened is that the JCVI changed their advice on AZ once the data on thrombosis became clearer and younger patients were put into the Pfizer group.

‘[The] vaccines will expire this and next week. This risks at least tens of thousands of doses being thrown in the bin, if not more than 100,000 nationally.’

BMA GP committee chair Dr Richard Vautrey said it would be ‘indefensible’ if the vaccines were ‘left to expire and be thrown away’.

He said: ‘Vaccines are a precious resource and the key weapon in keeping Covid at bay and coming out of the pandemic, so as we’ve always said, wastage should be avoided at all costs. Practices and vaccine sites have throughout the campaign been doing their utmost to reach all eligible patients and improve take-up, but with national guidance changing around the use of AstraZeneca in younger groups it’s unsurprising that some places will have doses left over.

‘It’s incredibly concerning therefore to learn that where this is the case the excess jabs are not being picked up and redistributed where they’re needed, despite sites doing everything right and notifying NHS England when they have leftover stock.’

He added: ‘The Government should be putting into action plans to use any excess vaccines elsewhere; it’s indefensible if they’re left to expire and be thrown away.’

A Department of Health and Social Care (DHSC) spokesperson told Pulse that the Government is ‘looking at options’ to prevent excess vaccines due to expire from being wasted.

They said: ‘Robust measures have been put in place throughout the vaccination programme to ensure wastage is kept to an absolute minimum and we are looking at options to further reduce waste for vaccines which may expire.’

They added on background that sites have been encouraged to reallocate stock at a local level, such as to walk-in and pop-up centres, to support the change in demand and that sites must continue to hold doses to ensure patients can still take up the vaccine offer.

Wastage has been far lower than expected and the Government is continuing to work to ensure that any vaccine surpluses are reallocated to other nations that require it where possible, they said.

The spokesperson reiterated the Government’s commitment to donating vaccine doses to support global recovery ‘within the next year’, with the first nine-million donation of AstraZeneca jabs announced last month.

Pulse has also approached NHS England and the MHRA for comment.

Following reports of rare blood clotting events related to the AstraZeneca vaccine in March, a large number of European countries have restricted its use.

The Government announced in May that GP practices should offer patients under 40 an alternative to the AstraZeneca vaccine amid blood clot fears, following similar guidance for other age groups.

Meanwhile, the wastage of vaccines has been a source of contention throughout the vaccination programme, with GPs investigated earlier this year for administering leftover Covid vaccine doses to patients outside eligible cohorts.

It comes as the Government has announced that the UK has ordered a further 35 million Pfizer/BioNTech Covid vaccines due to arrive from the second half of next year, which could be used for potential future booster programmes.

the cost is not really a problem – it’s all paid for by the magic money tree the politicians have access to !

the same money tree that pays the track and trace staff more than the people actually giving the vaccines !

you couldn’t make it up !

HMG know 10’s of thousands is bell the threshold of equating to bad news in the media so didn’t do anything Not there money after all ! Brexit supplies and logistics fallout interestingly robustly defended with rehoming argument when it came to drivers from the EU Vets Medics etc etc

bell is below oops

DVLA should be privatized

Ok
There are two ways of commenting on this :
(1) The polite way : the bottom line question is why can’t we move these still effective AZ vaccines earlier than end of August (5 days time) to other countries desperately needing them ? What can be done differently?🧐 Will lessons be learnt ??😎
(2) Well , the other way obviously contains my expletives and a question on the competence of NHSE and the government 😈

I , alongside with all CD colleagues, were required to report exactly how many and what types of vaccines(with expiry dates) we have in our fridges every week to NHSE . A vision to read the caveat of expiry dates are fundamental.

I agree this a waste of a precious resource. Its is a travesty when so many people are dying that paper pushing rules over common sense. I am sure that the vaccines will have some effect and is an insult to those who are dying in third world countries. It is the luxury that only rich countries can have whilst the poor die..