Sign inRegisterMagazine
Home News Covid-19 GPs will get ‘third’ priority to Covid tests, ahead of public

GPs will get ‘third’ priority to Covid tests, ahead of public 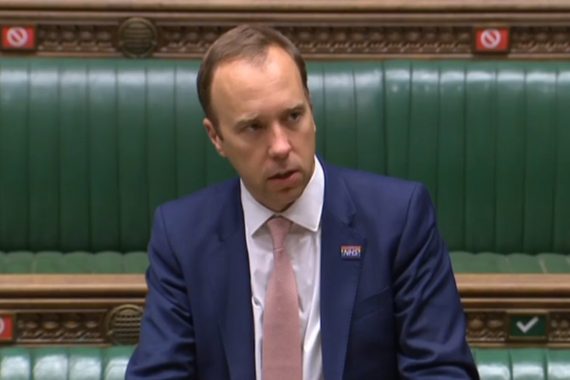 GPs will be given priority for Covid testing ahead of the public, but after acute and care home staff, the Government has announced.

It comes as last week health secretary Matt Hancock said he would ‘set out in full an updated prioritisation’ for access to Covid tests, amid news that GPs and other healthcare workers were isolating unnecessarily.

Pulse exclusively revealed nearly two weeks ago that GPs were unable to work because they could not get hold of tests for themselves or their children.

In a statement to the House of Commons this afternoon, Mr Hancock said: ‘Today we have published our list of where tests are being prioritised, setting out how we will make sure tests are allocated where they are needed most.

‘Fifth, testing for teaching staff with symptoms, so we can keep schools and classes open. And then the general public when they have symptoms, prioritising those in areas of high incidence.’

Mr Hancock said this comes as the country is ‘at a tipping point’ with the ‘virus spreading’, adding that Prime Minister Boris Johnson will update MPs ‘with any more action that we need to take’ tomorrow.

Earlier today, the Government’s chief scientific adviser Sir Patrick Vallance warned that virus cases are on course to reach 50,000 a day by mid-October, resulting in over 200 daily deaths by November.

He also said the Government was hopeful that a Covid vaccine could become available in the ‘early half’ of next year.

Chief medical officer Professor Chris Whitty urged the public to take action to mitigate the spread by sticking to the current Covid rules.

Mr Hancock also announced a proposal for £10,000 fines for those who fail to self-isolate when required.

The Government will also give a £500 support payment to those on low income who need to self-isolate. It will apply directly in England and be rolled out in the devolved nations via the Barnett formula.

Mr Hancock said: ‘NHS Test and Trace will make regular checks on those who are self-isolating. And we will crack down on employers who try to prevent staff from following the rules.

‘Over the past few months, self-isolation has been instrumental in breaking the chain and blunting the force of this virus. We know that it works. And with winter ahead, we will support everyone to do what is right to help stop the spread of this virus.’

He also listed new areas in the North of England which were put under local measures, adding parts of Lancashire, Merseyside, Warrington and Halton in addition to existing local lockdown areas.

But he said that having ‘heard the concerns about the impact of local action on childcare arrangements’ there will be ‘a new exemption for looking after children under the age of 14, or vulnerable adults, where that is necessary for caring purposes’.

He concluded: ‘This is a moment where we once again, must come together, to tackle this deadly disease.’

most of what I did today was acute clinical care.Shall I stop doing it then?
they have no idea!

It shows how much the Government values GPs – it makes me think …..

It is logical to have a ‘merit’ system to ensure certain cohorts can be tested more efficiently with meaningful impact on the health system . But then it also begs the question on the testing capacity . It has become more apparent that the prime minister had shot himself with ‘Moonshot’ by a bombast of ostentatious target testing 10 million people per day (potentially costing £100 billion) . There might be enough test kits but clearly not enough laboratories with the expertise.
Bottom line is , the government is more than self-conscious of the fact it had messed up so much in the first wave of Covid-19 that its credibility and trust are rapidly evaporating . This is an egregious irony considering a majority of 80 seats in House of Commons . It always has the nuclear option of passing legislations as the ultimate political weapon but this will only attract more ‘push-backs’ particularly in the fourth estate ( even in those pro-party media) .
There are different types of power according to Bernard Russell in his book ‘Power’ in 1938 . The so called traditional( hence , legitimate ) power can rapidly degrade into naked power when people stop believing the governing regime . We clearly see that in Belarus , Lebanon and Hong Kong right now ………

GPs are on the bottom rung yet again. Feeling completely undervalued.

GPs do not need Covid tests until the Sensitivity imcreases to near 99%.
Until then. false negative rates in excess of 90% in some cases make them a dangerous false reassurance, for someone who is ill enough to stay at home anyway, we don;t want colds or flu around this winter either., please.

So we are officially 3rd class citizens behind care homes. I thought GPs go into care homes. The last time I was asked for a visit was yesterday.

1 GP or 1 practice nurse off can completely destabilise a small practice.

useful to remember the point about false negatives, but difficult to ignore the ongoing wilful demonstrable denigration

i’ll take the 2 weeks off then. No GP. Well, we not wanted anyway so what’s the issue? Oh, more people turning up in A&E bringing covid. well I never. Totally unpredictable that one. 2-3 colds per winter – that’s 4-6 weeks of sick leave plus holiday for every GP. Only doing as we are told. probably far more effective than any strike one thinks.