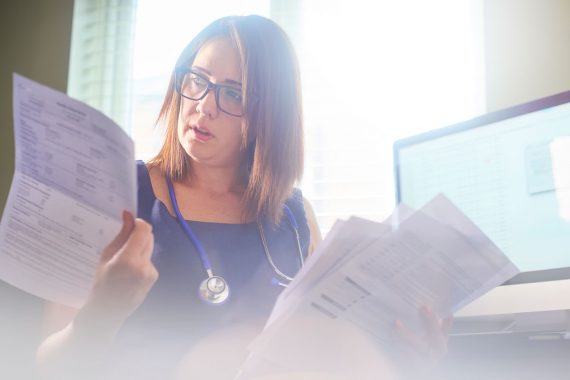 Almost three-quarters of GPs feel ‘anxious’ about work during this autumn and winter as mental health issues among GPs are on the rise, the BMA has revealed.

It comes as NHS England’s primary care medical director yesterday told GPs and their teams they are ‘valued and appreciated’, as new figures revealed a sharp increase in the number of GP consultations last month.

The latest BMA Covid-19 tracker survey, which closed on 22 October, surveyed almost 2,700 GPs in England, Wales and Northern Ireland on the impact the pandemic has had on them.

It found that 73% reported feeling ‘anxious’ about working ‘during the forthcoming autumn/ winter months’, with almost a fifth (18%) feeling ‘extremely anxious’.

And more than half (59%) of GPs said they are suffering from depression, anxiety, stress, burnout, emotional distress or another mental health condition relating to or made worse by work – compared with 44% in a similar BMA survey in July.

Almost half (47%) said this had been made worse by the pandemic and a similar number (48%) said their general health and wellbeing is ‘worse’ now than in the first wave.

According to the survey:

The poll also revealed significant pressure on practices, with 76% of GPs reporting that the level of demand for non-Covid care has increased to the same level or higher than before the pandemic.

Three-quarters (75%) of GPs cited their ‘ability to cope with demand from non-Covid patients’ as one of their four top areas of concern and 54% said they are ‘not confident’ their practice can do so.

A further 57% cited coping with symptomatic as a key concern, while 45% chose ‘plans to tackle the backlog of waiting patients’.

BMA council chair Dr Chaand Nagpaul said: ‘Doctors know that this winter is likely to be one of the most difficult times of their careers.

‘They are extremely worried about the ability of the NHS to cope and their ability to care for the needs of their patients.’

He added that it is ‘clear that over-work and under-capacity are taking their toll on the NHS, its workforce and its patients’.

Meanwhile, only around half (55%) of GPs believe current lockdown or tiering restrictions in their area will be effective to contain the spread of Covid, while 34% said they would have ‘no impact’ at all.

Dr Nagpaul added: ‘Large numbers of doctors across England have little faith that the Government’s current ‘Tiered’ lock-downs will have any significant impact on controlling the virus.

‘Instead of a few short weeks of suppression, bringing economic and emotional misery for those in the areas affected, we need a national prevention strategy that has a lasting impact and gets growing infection rates under control across England.’

The survey also found that staffing shortages were a key concern for 59% of GPs, with almost four in 10 (39%) reporting that the sick leave or self-isolation of clinical colleagues had impacted patient care in the past two weeks.

A total of 62% had had clinical colleagues off work due to coronavirus in the past fortnight, according to the BMA.

And more than half (54%) of GPs said that Covid-related isolation or sick leave had reduced the number of patients who could be seen, while 69% of respondents had to do additional work to cover absent colleagues.

As a result, 71% of GPs responding to the survey said additional funding is needed for overtime and additional sessions over the next few months.

The BMA said it is calling for the Government to be ‘both honest and realistic with the public about whether the NHS can cope with routine care and Covid care this winter’.

The Government must provide a ‘transparent and systematic approach’ to ensure that all patients with urgent need are treated in the coming months and the ‘investment necessary’ to enable this.

However, NHS England has recently said that GPs will receive ‘no additional’ Covid-specific funding beyond September – aside from that set aside for PPE reimbursement.

How awful. The dire results of this BMA survey, like all the others over the years, surely warrant some serious action – pick up your pens, colleagues, gird your loins for yet more surveys!

Work smarter. Be healthier. The NHS couldn’t care less if you’re dead or alive. And no one’s giving you a medal at the end of this, at the end of your career and you’re not taking your FRCGP to the next world. Don’t be tricked into harassment by ‘contract obligation’ or ‘duty’ or ‘patient first’. You’re a human being, not a second class professional slave. Colleagues who lost their voice, just sacrificed the ultimate, try not to forget that or them.

Anxiety about workload I submit is less acute than anxiety about dishonest politicians, ineffective leadership and hostile management?