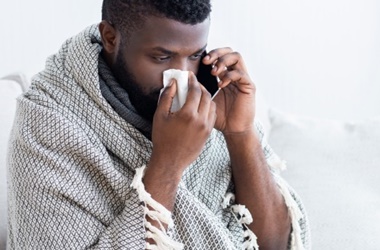 Symptoms including chills, loss of appetite, headache and muscle aches are ‘strongly linked’ with being infected with Covid-19, a study of over one million people has shown.

Researchers from Imperial College London’s REACT-1 study found that having any of these symptoms – or the classic ones of fever; loss of taste or smell; or a new persistent cough – was associated with Covid infection. The more of the symptoms people showed, the more likely they were to test positive.

The researchers are now calling for a wider range of symptoms to be included on the list prompting people to book a Covid test.

The researchers further found there was a difference in reported symptoms based on age, with chills linked to testing positive in all ages; headaches reported in young people aged 5-17; appetite loss in 18-54 and 55+; and muscle aches in people aged 18-54.

The pre-print study is not yet peer reviewed.

Professor Paul Elliott, director of the REACT programme at Imperial, said: ‘These new findings suggest many people with Covid-19 won’t be getting tested – and therefore won’t be self-isolating – because their symptoms don’t match those used in current public health guidance to help identify infected people.

‘We understand that there is a need for clear testing criteria, and that including lots of symptoms which are commonly found in other illnesses like seasonal flu could risk people self-isolating unnecessarily. I hope that our findings on the most informative symptoms mean that the testing programme can take advantage of the most up-to-date evidence, helping to identify more infected people.’

The news comes as a number of GPs have called for the Government to include more symptoms in the official case definition of Covid, including a runny nose and a cold. The symptoms, with the technical term coryza, should be added to the list of symptoms that prompt people to get a Covid test, they said.

Currently, Covid tests are available for those who have a high temperature, a new, continuous cough or have lost or noticed a change in their sense of smell or taste.