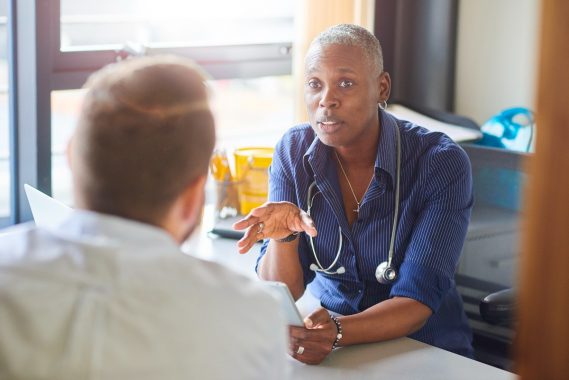 More than half of GPs have faced verbal abuse from patients or those accompanying them in the last month and one in five has been threatened, according to a shocking new survey from the BMA.

The survey of more than 2,400 doctors in England, Wales and Northern Ireland reveals extraordinary levels of abuse aimed at doctors and their colleagues and suggests the situation has deteriorated in the last year.

More than a third (37%) of all respondents said they had experienced verbal abuse first-hand in the most recent month including 51% of GPs and 30% of hospital doctors.

In response, the BMA’s GP Committee called on the Government and NHS England to be ‘honest’ with the public about what they can expect from GP practices.

One in five (20%) GPs responding to the survey reported being threatened and more than two thirds (67%) had witnessed violence or abuse against other staff members.

And 96% of GPs who reported the abuse of colleagues said it was directed at reception staff.

Two-thirds of GPs (67%) said their experience of abuse, threatening behaviour or violence had got worse in the last year.

The survey found the most common place for abuse experienced by GPs was in their consulting rooms (53%).

And while respondents reported a number of factors, 75% of GPs said the abusive patients had lashed out because they were unhappy with the service or access.

This comes as LMC leaders told Pulse in June that their practices had received abuse from patients as a direct result of NHS England’s controversial GP face-to-face order.

BMA GP committee chair  Dr Richard Vautrey said: ‘The last year-and-a-half has been an incredibly challenging time for both doctors and patients, and many doctors share the frustration of their patients around unfamiliar ways of working, or if waiting times are too long.

‘However, abuse, violence and threats are absolutely unacceptable and should never be tolerated.

Dr Vautrey stressed that ‘GPs and their colleagues are doing their absolute best, day in, day out, to provide care to their local communities’, with the ‘vast majority’ of patients appreciating the hard work.

But he said the BMA’s findings ‘show an incredibly worrying trend, with GPs reporting rising levels of abuse against staff in general practice, who are already working under intense pressure’.

‘Facing such abuse leaves doctors fearing for the safety of themselves, their colleagues and their loved ones, which can have a profound effect on their wellbeing, he said.

‘It can leave even the most resilient GP feeling alienated and undervalued, leaving them questioning their career when the NHS can ill afford to lose any more staff in general practice.

‘Meanwhile, being on the receiving end of rudeness can impact productivity and the quality of work, ultimately threatening patient care.’

In response, Dr Vautrey called for ‘an honest public conversation, led by the Government and NHS England, about the precarious state the NHS now finds itself in after 18 months of managing a pandemic’ to ensure that ‘people have realistic expectations, and to prevent staff bearing the brunt of frustration and anger’.

‘Alongside the urgent need for support for general practice and the wider NHS from Government so that we stand a chance of meeting the growing needs of our patients, we’d continue to remind the public to be kind and considerate when contacting their surgery – we are humans too, after all,’ he said.

A female GP partner in the South West had described the litany of abuse she and colleagues had been subjected to in recent weeks.

She said: ‘We get shouted at, spoken to harshly and called unkind and unhelpful, often for things that are not within our control, such as hospital waiting lists, and the fact that we have to ask people to be considerate of others to keep everyone safe, by doing things such as getting tested for Covid, and not coming in when they have Covid symptoms.

‘In just the last week I have been shouted at because I asked someone to do a PCR test for their new cough and fever, and was called the most horrifically offensive name after I asked someone not to come into the surgery waiting room with a cough, and instead asked them to come to our onsite ‘hot clinic’ where people with Covid symptoms can be seen safely.

‘I was also told to ‘go back to where you come from’ by a patient who was unhappy at me being unable to tell him when he would be seen in hospital.

‘The misleading headlines about practices being closed haven’t helped at all. A few months ago a patient I was seeing face-to-face, less than three hours after she rang the surgery, told me it was ‘impossible to see a doctor as you’re not seeing patients’.

‘Meanwhile, my neighbour – who has seen me go out the door to work every single day through the pandemic – and saw me come home late and tired and in tears, said yesterday ‘are you seeing patients again yet?’

‘This feels so unfair and unkind when we have never closed and never stopped seeing patients.

‘These behaviours are causing staff members, from receptionists to nurses and GPs, to want to quit. Our local practice managers are so distressed by the unrelenting complaints and poor behaviour that they are leaving in droves.

‘The social contract that general practice prides itself on being built on seems to have broken down and people think it’s ok to be rude and unkind.’

‘GP surgeries have clearly borne the brunt of the public’s frustrations, and it is shocking and appalling that our frontline workers have been facing this sort of abuse.

‘Abuse presents yet another source of anxiety at a time when many healthcare workers have expressed grave concerns about their mental wellbeing. GPs are mentally and physically exhausted with the risk of disillusionment and burnout higher than ever.

‘Wellbeing support must be provided to all GP surgery staff who are feeling overwhelmed and demoralised, and a zero-tolerance policy to abuse must be enforced across the NHS so healthcare workers feel their safety is a priority.’

The BMA GP Committee has called for talks with new NHS England chief executive Amanda Pritchard in a bid to break the deadlock over face-to-face GP appointments for patients.

Relations nosedived in May when the committee passed a motion of ‘no confidence’ in NHS England’s senior leadership and suspended formal meetings between the two organisations.

The emergency motion came in response to a ‘tone deaf’ and ‘insulting’ letter from NHS England ordering all GP practices to offer face-to-face appointments.

Meanwhile, a BMA survey in May showed almost nine in 10 Scottish GPs said they or their practice staff faced abuse in the last month.

After nurturing patient expectations as part of a consultative model for many years, should we not be delighted at our own success?

Models are representations and not existential facts; we would do well to remember this when constructing a new model which again lacks existential truth.

Hardly surprising given NHSE England have directly contributed to this abuse with their letters and briefing the press against us.

GPs need to have the right to remove patients from their list restored. Patients know they can currently insult and threaten with impunity.

NHS England and the Ombudsman actively collude with abuse by challenging and obstructing attempts by GPs to protect themselves and their staff.

why is anyone a member?

The more you do, the less they care.

Let’s think: the plumber, the solicitor, the accountant, the celebrity, the politician.
They are all inaccessible without a fee – and they all command more respect than you.
They pay more to see a footballer and air hostess than you.

I feel sorry for A+E and paramedics – they are in the gutter with you also. But that is why the NHS has to go abroad to steal other countries workforce, and golden handshake them with a dirty glove because this is one toxic setting.

I have been a GP since 1998 and a partner for almost 20 years and have worked in the NHS through periods of famine and periods when well funded.
I work in a well resourced, well staffed training practice.
However I have never seen the service under so much pressure as it is now and for the first time in a long time I am frequently appalled at the level of service the NHS is offering-nothing works anywhere at the moment and we are just fire-fighting with snap clinical decisions, often validating those made by other far less well trained staff and crossing our fingers that there isn’t a significant clinical error somewhere in the day. What I consider as quality has just disappeared from the system.
Without the ability for experienced, well trained GPs to demonstrate their quality and importance then we lose the argument for more of us.
It is not surprising patients are frustrated, have no patience with us and are complaining. Some of my family members of different ages have tried to access the health service recently and even when I know the system so can help navigate the standard is just rubbish and they look at me in dismay as I try and find some kind of explanation/excuse.
We have to take some stuff away: not just the vague talk about paperwork that goes on for ever as most of the paperwork I do is entirely relevant to good care of often complex patients but huge chunks of stuff that appears in appointments.
I think everyone has now concluded that this isn’t just about getting our heads down for a bit longer and it will come right.
Leadership at a political level needs to be so strong at the moment from our representatives to enforce some change in a way that can be managed rather than literally the system falling over.
I want to see the job back to something to be proud of, high quality and satisfying before I retire rather than it just get worse year on year.

RLE. Well, the L bit seems difficult at the moment. Did you know there is a national shortage of HGV drivers? I can be a well- paid job, with regulated hours and a union that wants to stand by its members. Retrain colleagues, retrain!

All those FRCGPs and MBEs cannot “lead” and change the simple proportionality of low morale to a referral.