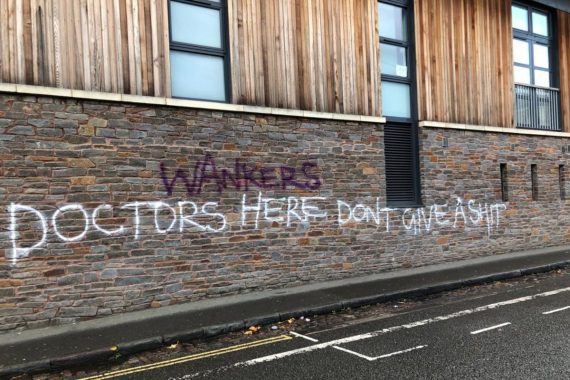 GPs have called for more public support from NHS England after a GP practice was vandalised with ‘anti-GP’ graffiti.

The Charlotte Keel Medical Practice was subjected to the attack, which included a message left for the practice’s GPs using foul language.

Pulse columnist Dr Shaba Nabi, who works at the practice, posted a picture on Twitter, adding that its doctors ‘will continue serving our deprived population with pride’.

Dr Kyle Roys, a GP in Bristol, also posted about the incident on Twitter, which involved the practice where his wife works as a GP.

In another tweet, Dr Roys added that the graffiti attack has come as the practice’s staff is ‘working really hard, staying late to make sure sure the high demand is met’.

Dr Roys’ comments come as GPs have reported receiving ‘abuse’ following media reports on claims that GP practices have not been ‘open’ during the Covid-19 pandemic.

And Kent LMC chair Dr Gaurav Gupta reached out to offer his support to Dr Nabi and her colleagues, after she posted a picture of the offensive graffiti.

The BMA’s GP Committee has met with a health minister, as well as the NHS chief, over NHS England’s claim last month that GP practices are not open.

This is a breaking news story and Pulse has approached NHS England for comment.

The Government and NHSE set you up, and us all to fail. From cqc, to GMC, to ppe to dead colleagues and continuous slandering. They masterfully silenced their worker, and put them out into the bullets and fire with hands held tied. The diseased quotation ‘GP bashing’ is a shameful mark of the NHS and it’s ‘leadership’. Btw…it is the impervious wall, not you that they marked.

Who’d have thought that the government, much of the press and our own so-called GP leaders in NHSE briefing against us could lead to the public despising GPs?

If they had any decency, those who stoked these beliefs would resign.

This is terrible. I have also seen patients write similar things on facebook or review websites. Yet NHS England say abuse will not be tolerate.

This is terrible. I have also seen patients write similar things on facebook or review websites. Yet NHS England say abuse will not be tolerated.

“In response, a representative from CQC said “we take these sorts of incidents very seriously, and will be demanding sight of the practice’s anti-vandalism policy as a matter of urgency”, NHSE have also responded “we will be expecting the practice to track down those responsible to ensure they receive an appropriate response and action plan to their complaint””

Clearly cannot respond to a complaint like this have they have not given their details and signed it.

This is likely to be terribly demoralising for the entire practice staff just when the winter and the second wave is putting even more stress on them. You need to know that your colleagues support you.

And if they find the culprit & strike them off the list the defence of ‘I was under stress because of my illness’ will be used and the Ombudsman/GMC will find in favour of this miscreant rather than supporting the GP.

I don’t have an anti vandalism policy – why would I? I would report this to the police and off list anyone damaging my business or abusing my team.

So the response to this is to shrug your shoulders and say youll keep on ‘serving with pride’??

Exactly the attitude why NHSE knows it can keep on punching the GP punchbag.

As I wrote previously , the way it spin fostered a ‘conclusion’ that only hospital doctors were saving lives and the heroes ,deserving the clapping. GPs had p***ed off doing f**k all .
Nikita , this is on you and NHS England . The slightest sympathy you could have was the fact that your big boss, Mr Stevens , was perhaps using you as a ‘scapegoat’ and hiding himself well out of this .
Despicable.

What a truly offensive and abusive thing to do! However, it also makes me think.
How is GP care perceived by patients these days based on their own experience, not based on what they read in the papers.

After more than 20 years of working as GP I suddenly found myself as a patient last month. I had a large orthopaedic operation and have been left with neurological deficit. Nobody in my registered practice seems interested, there is no proactive planing, nobody reaches out, no face to face consultations offered, no phone call to check on my progress or how I am coping? And today finally the physio referral came through – offering me physio via phone!! So, from a patient’s perspective it can feel like there is barely a GP service on offer now since Covid started and that nobody cares any more. It feels very lonely – Luckily I know what should happen and know how to ask for it. But somebody less eloquent or knowledgeable might easily feel totally lost. Of course that still does not justify such aggressive vandalism.

Such comments don’t justify poor gp’s who are following guide lines. I felt uncomfortable with this telephone triage only hence I don’t work at present .
I do think gp’s should have low threshold to have face to face consultation.

I do think all gps do see patients when warranted . They are doing great job and don’t deserve such graffiti.

Don’t waste time waiting for support from NHSE…. you are just wasting your time……and you’ll likely just get stabbed in the back again…..likely just a disgruntled meth head who didn’t get the tramadol/ pregabalin/ codeine he wanted…..just get a friendly graffiti artist and a white spray paint to change the ‘a sh1t’ to diazepam then recirculate via social media, leave for a week then remove…… problem sorted. Or you could get a purple spray can and see where NHSE might fit in……

I have to remind myself that this is a minority of patients. There are so many angry people out there and they want what they want and they want it now.
NHSE have to intervene- or we really will all need to close due Stress. We need leadership, we need respect and we need to be able to fight back. This idiot has written it on a wall but it hurts on line, on the phone and in a letter.
ENOUGH.

Reminds me of anonymous comments on friends and family. Graffiti to be scrubbed off and ignored.

Working as a GP, serving patients during covid pandemic time, it is unacceptable to accept such attacks. If only all GPs could unitedly stop working for a day or two – I’d wonder how the heroes in hospital manage.

95% chance this was due to not signing a fit young person off long term or not prescribing enough oxygabapentinazepines.
Sad the staff had to endure this.
The problem is it isn’t just patients who believe the government spin – some commissioners do to.

what would be good is all partners agreeing to hand back their contract simultaneously and let the “commisioners” sort out the mess that ensues.

after all – they have had a part in encouraging this sort of action by their lack of support for practices who are working very hard while the “proper doctors” (i.e. those working in hospitals) can hide behind closed doors.

the partners can come to locumland – where you can take back control of your working environment, and you are not controlled by these muppets so much.

when the 15000 odd patients really are affected, perhaps those “at the top”, including the media, will realise the damage they are doing.

“NOTHING AIN’T WORTH NOTHIN’ IF IT’S FREE” – gordon lightfoot

“Stuart Buchanan26 October, 2020 7:53 pm
Don’t waste time waiting for support from NHSE…. you are just wasting your time……and you’ll likely just get stabbed in the back again…..likely just a disgruntled meth head who didn’t get the tramadol/ pregabalin/ codeine he wanted…..just get a friendly graffiti artist and a white spray paint to change the ‘a sh1t’ to diazepam then recirculate via social media, leave for a week then remove…… problem sorted. Or you could get a purple spray can and see where NHSE might fit in……”

The diazepam bit is one of the funniest comments I’ve seen on Pulse. Still makes me chuckle everytime I think about it.

I am truly appalled by this.
Ironically I have only just read news about it as I have been so busy working this week .

…we have a medical student with us at the moment. His comment on the first day working with us was:
‘ I can’t believe how stressful it is being a GP’
Says it all. yet the ivory tower dwellers ‘in charge’, still tip their brimming pots of excreta over us from the battlements.

All go off with a “stress-related illness”.

I think part of the problem is that we ARE accessible. I have spent so much time in the last few weeks trying to explain either why I cannot refer to some service (it has not restarted post lockdown) of if I have successfully referred then why the wait is 6 months for an appt. We get the flak because we do actually talk to our patients on a reasonable timescale.
Sorry for the lady who had the operation but we do not have the capacity to check up on everyone all the time, even post-operatively. We are fully occupied dealing with those who have contacted us for help or advice (and trying to get half the population in for flu vaccs of course). If you do not contact us then we have to assume you are doing OK.

[…] Unfortunately we have seen an increase in negativity towards the NHS, particularly in general practi…. Cardiff & Vale University Health Board recently posted on Facebook about this issue and as a practice we will not tolerate any unacceptable behaviour and may remove patients from our list under our zero tolerance policy. What we do know is everyone working in the NHS is working extremely hard to not only fight this virus, but ensuring patients continue to receive the care and treatment they need whilst putting themselves and their families at risk. At the end of the day, we are all in this together, we are all patients, clinicians, friends, family, colleagues and communities and ‘normal’ cannot come soon enough. […]

Reply
Unsuitable or offensive? Report this comment
How Should Your Practice Respond? - Ockham Healthcare 19 May, 2021 8:55 am

[…] The workload itself in general practice has risen to unsustainable levels over the last few months, in part fuelled by the additional demand from the new routes of access.  Practices are already offering face to face appointments (the implication they are not is of itself insulting), but what this does is raise patient expectations to expect an appointment with their GP whenever they want one.  It is GP receptionists who often bear the brunt where these expectations meet reality, and in extreme circumstances can result in vandalism of practices. […]