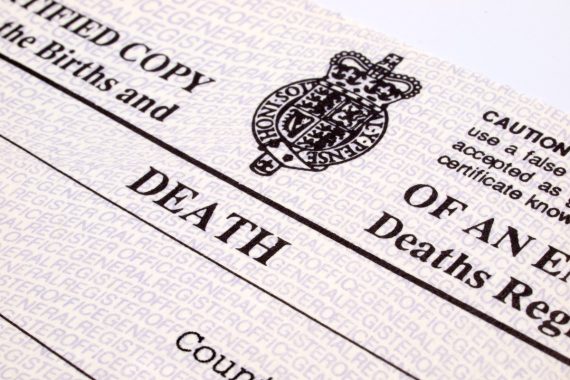 GPs signing death certificates will now need to have ‘attended’ the patient in the 28 days preceding their death, or viewed the body in person after death.

During the pandemic, any doctor could sign the Medical Certificate of Cause of Death (MCCD), regardless of whether they were the medical practitioner to have attended.

This provision was part of guidance released during the pandemic to allow for the fact that death may occur in self-isolating households.

But new guidance said that ‘the provision for any medical practitioner to complete the MCCD, introduced as a temporary measure by the Coronavirus Act, will be discontinued when the Act expires at midnight on 24 March 2022’.

It also said: ‘A medical practitioner with GMC registration will be able to sign the MCCD if they attended the deceased during their final illness up to 28 days before death, or viewed the body in person after death

‘Attended’ does include through ‘consultation using video technology’, but not by telephone, the guidelines confirmed.

However, the new guidance states: ‘Attendance after death (i.e. viewing the body) will need to be in person and includes verifying the death.’

But NHS England has also announced that some pandemic changes to the death certification process will be permanently retained.

In updated guidance, NHS England said changes that will remain are:

But Dr Paul Cundy, a member of the BMA’s GP Committee who has been following the death verification issues closely, has written an open letter saying he is ‘concerned’ by the ‘incorrect’ guidance as it is ‘placing doctors at risk and with unnecessary and burdensome work’.

Dr Cundy’s letter refers to the Births and Deaths Registration Act 1953, and highlights there is ‘no reference to timing, chronology nor of seeing or viewing the deceased after death’.

He asked for an ‘immediate correction’ to be issued, and said he is ‘already advising GPs accordingly’.

It comes as the Ministry and Justice indicated in 2020 that coroners have no legal powers to tell GPs they must confirm a death in person.

It followed coroners clashing with the BMA over who could verify a death during the pandemic, and saw the BMA threaten legal action.

Patients not seen within the last 28 days

Note: This article was updated at 10.45 on 16 March to reflect that a GP does not need to have seen a patient in person after their death if they had consulted them in person, or via video, in the 28 days preceding their death,

Coroners have no right to tell GPs they must verify death in person, says MOJ

Coroners clash with BMA over death verification during coronavirus pandemic

They really should get it right first time.

Dear All,
Ignore the headline its wrong. You can access my open letter here

That explains everything. I did ask Pulse to point to it but they decided not to.
Regards
Paul Cundy

Well done Paul. We don’t need GPs to be doing any extra work at the current time.