Anti-vaxxers can learn from MMR fiasco 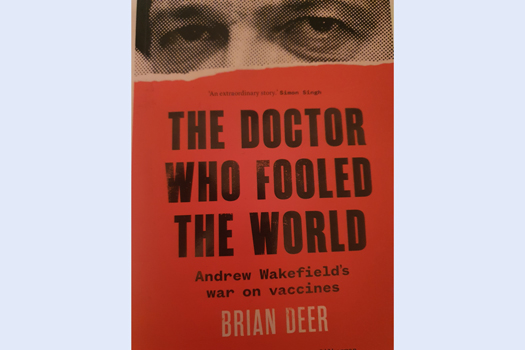 In 2004, Brian Deer exposed the research scandal concerning MMR vaccine in The Sunday Times. He has just produced an excellent narrative of his investigation of Andrew Wakefield’s fraudulent 1998 Lancet paper: a postulated association of MMR vaccine, bowel disease, and autism. The timing is right. The present medical preoccupation is the quest for a Covid vaccine and the challenge of the anti-vaxxer movement. The title flatters. Wakefield did not fool the world – just flat earthers.

Wakefield’s study was an ‘early report’, a case series. It was merely hypothesis generating. The authors stated: ‘We did not prove an association between measles, mumps, and rubella vaccine and the syndrome described…’. Fraudulent or not, it was incapable of proving anything. The study has been widely overinterpreted.

Years before, in September 1992, two of three established MMR brands in UK were withdrawn on safety grounds. The Urabe mumps vaccine virus component undoubtedly caused a ‘mild transient meningitis’. It was biologically implausible that an inflammation of the brain lining with some associated encephalitis would recover in every single case. There was likely some idiosyncratic susceptibility. Product liability lawyers waited for the claims. But they never came.

What came six years later instead was a whacky curveball. Defence lawyers gasped. Wakefield presented a cumbersome double hypothesis that persistent measles vaccine virus caused a primary bowel disease, which caused bowel leakiness allowing molecules derived from diet to enter the circulation. These molecules somehow crossed the blood brain barrier to enter the brain where they did their damage. This theory offended Occam’s principle. Indeed, that measles had neuropathic potential and can rarely cause a chronic brain infection provided a simple direct mechanism to help cobble a theory that MMR was implicated in a developmental brain disorder. Wakefield however preferred the enteropathic route, reflecting his earlier research interests in Crohn’s disease.

The problem for Wakefield was that the available evidence showed no difference in the risk of autism in subjects vaccinated or not. There was absence of evidence; there was evidence of absence. This is the key to any investigation of the aetiology of disease, as Doll and Hill showed with smoking and lung cancer.

Wakefield had to resort to a biological proof – initially describing a specific pathology (ileal- lymphoid-nodular-hyperplasia, non-specific colitis) and a specific clinical syndrome (regressive autism with enteropathy). Such evidence could not of itself prove causation but merely represented circumstance which facilitated a causal inference. The search was for evidence of persistence of measles virus in subjects and its absence in controls – more exacting evidence of aetiology than mere clinical or pathological specificity.

Deer reported Wakefield’s interest in the ‘oddity’ of a child having two measles vaccines: so that Wakefield could posit a ‘double hit’, or ‘rechallenge’ effect. In Britain, since 1994, two vaccinations with measles was the norm.

The problem for Wakefield with a proof that was intended to be simple, clear, and intuitive was that failure of such proof was just as striking. And this is just what happened. The occurrence of detected measles was the same in litigant-subjects as controls.

The litigation collapsed, including the claims of children who suffered brain damage or nerve deafness following vaccination with the Urabe mumps strain. Were these claims valid? We will never know.How could this fiasco which cost millions and endangered the lives of the nation’s children have come about?

The legal aid tap was turned off, but too late. The legal aid authority stated: ‘This was the first case in which research had been funded by legal aid. In retrospect, it was not effective or appropriate… to fund research. The courts are not the place to prove new medical truths.’

It was not a matter of ‘retrospect’ – it was never appropriate for this case to be funded. It cannot be reasonable to grant legal aid to establish ‘reasonable grounds’, a matter of hope over evidence. Wouldn’t any scientist demand legal aid to fund crackpot research? Legal aid has supported too many implausible and undeserving claims with scant regard for the public purse. Too often the only beneficiaries have been lawyers; civil legal aid was in disrepute. Parliament has responded decisively to this indiscipline by cutting out legal aid for civil claims.

We cannot legislate against junk science; but we can ensure that it is never publicly funded to the detriment of public safety. Brian Deer’s contribution cannot be overstated.

Anthony Barton is a lawyer and medical practitioner; he specialises in clinical negligence and product liability.

“But there is an association between measles, vaccination, and autism :- they all tend to occur in childhood.”

“…the relative risk of autistic disorder in the group of vaccinated children, as compared with the unvaccinated group, was 0.92…”

i need no vaccine against a virus that kills very few–esp. when the vaccine has been rushed thru, where money seems to be a driving force, and where immunity has been given to the makers etc