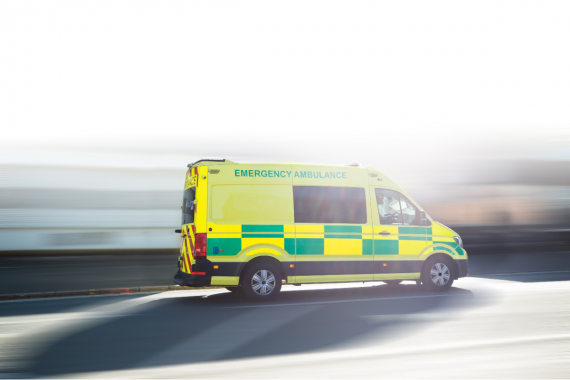 GPs are struggling with increased waiting times for ambulances, with consequences including needing to boost oxygen stocks or take patients to hospital themselves.

A GP at a Bristol practice waited five hours for an ambulance before taking a child patient to hospital herself.

Dr Lucy Pocock rang an ambulance for a six-year-old patient at 4:45pm on Tuesday (2 November).

By 9pm, when the practice building was due to be locked up by a security guard, it had still not arrived.

Dr Pocock said: ‘I’d been working since half past eight that morning, and I don’t normally work till nine o’clock. I called one of my nursing colleagues who came back into work. We discussed it with the patient’s mother and agreed the best solution would be to book a taxi and all go together to the hospital.

‘I called ahead to the A&E to let them know that we were coming and they were brilliant and made sure that somebody was expecting us. So we left the surgery at 9:30pm. I got home at 11pm.’

Dr Pocock said it was ‘emotionally as well as physically exhausting’ to have to ‘make decisions like that when you know that you’re working at the limit of what you’re insured to do’.

‘And what if the patient had deteriorated on route? I’m not trained in managing people on the way to hospital. That’s not what I do.’

Following her ordeal, Dr Pocock has urged her practice colleagues to come up with a plan for future incidents as well as lobbying commissioners and the LMC to issue specific advice in response.

She said: ‘We’re not set up to manage acutely unwell people for a very long period of time. That’s not what we do.

‘What exactly are we meant to do, at the end of our day when our premises are being locked up, if we’ve got patients waiting for ambulances? From a medical, legal perspective, what is it that we’re able to do? When do we decide to bundle them into a taxi? I would like guidance on those things.’

In Dr Pocock’s experience, ambulance response times have gradually been getting worse: ‘I’ve been a GP for five years, and I’ve definitely seen it sliding slowly down. A couple of years ago, for a child, [an ambulance] would have probably been half an hour. At a push, an hour.

‘Maybe a month or two ago, I called an ambulance for a teenager who was septic. We waited two hours for that ambulance. I thought that was bad.’

She added: ‘My concern is that patients will die. It will happen, a patient will die in a GP surgery, and I think we’ve already seen examples of this previously, where coroners have indicated that GPs might be culpable in these circumstances. I think we’re on a sticky wicket, from a legal perspective.’

Data from NHS England shows the average response time for a life-threatening urgent call was around nine minutes in September this year, two minutes longer than the national target.

In August, the average response time for an ambulance to take a patient to hospital for the most urgent calls (those struggling to breathe or suffering cardiac arrest) was close to the worst on record – 11 minutes 10 seconds.

Category 2 calls are defined as a ‘serious condition… which may require rapid assessment and/or urgent transport’, which is what Dr Pocock’s patient was categorised as.

The average ambulance response time in England in February 2021 for a category 2 call was 18 minutes 19 seconds, just over the national standard target time of 18 minutes.

By September 2021, the category 2 call response time had more than doubled to 45 minutes 30 seconds.

Dr Pocock said that while GPs ‘have to accept that this is now the norm’; she also urged for the ‘broken system’ to be fixed.

‘I don’t want a patient dying in my care, while we wait for an ambulance. It’s not the care that I want to give. I don’t want that on my conscience.

‘It’s another thing for me where I think, actually, do I want to be a GP? Because this isn’t the job that I went into general practice for.’

Stressing she is not criticising the ambulance service, she added: ‘I don’t believe in tribalism, I think we are all in this terrible situation together. It’s going to be a pretty awful winter if measures aren’t put in place.’

It comes as a Norfolk GP practice is looking to double its oxygen amounts after almost running out when waiting several hours for ambulances.

GPs at Swan Lane and Newton Flotman Surgery in Norfolk waited three hours on Thursday 21 October for an ambulance for one patient, and an hour and a half for another patient.

Dr Dustyn Saint, a GP partner at the practice, said: ‘It’s something that has never, ever happened in our practice, because we’ve never had to wait that long for an ambulance before.’

Both patients needed oxygen, which meant the practice nearly ran out before the ambulances arrived.

Dr Saint said: ‘We’re treating it as a near miss and trying to put things in place to make sure it doesn’t happen again.’

The practice is now looking to double the amount of oxygen it keeps from one cylinder to two, though Dr Saint said it is not ‘quite as straightforward as one might expect’.

‘It causes other problems. Our practice manager has said there’s issues with keeping too much oxygen, because it poses a risk and CQC have got something to say about how much you should store. You’ve got to keep it under a certain amount, otherwise there’s regulatory issues, I guess because of the risks of storing large amounts of oxygen.’

Ambulances would have taken ‘a good 40 minutes’ to arrive at the rural Norfolk practice pre-pandemic, Dr Saint said.

Dr Saint said the health secretary’s belief that a lack of GP appointments has led to increased pressure on A&E departments is an ‘interesting viewpoint’.

‘I don’t think GPs can work any harder than they are currently. In fact, the majority of GPs are working way beyond what’s probably safe to try and do the best for patients. If he genuinely believes that, he needs to come and spend some time in general practice and see the reality of it.’

He added: ‘The trouble is, the chickens are coming home to roost for probably 10 years of austerity, with an unexpected pandemic. You’ve got services that were stretched pre-pandemic that are now at breaking point.’

It comes as Sajid Javid admitted the Government will fail to fulfil its election pledge to recruit 6,000 additional full-time equivalent GPs by 2025.

And a BMA survey found more than half of GPs would consider leaving the NHS if the Government does not provide them with the support they need.

£250m package is ‘a real recognition’ of pressure on GPs, say NHSE leaders

I got as far as taking the patient to the car park at 9pm after 3 hours wait. My wife who I was meant to pick up had to traipse to the practice on public transport. Just as I took the patient out the ambulance arrived.
This was 4 years ago in South London so not confined to rural areas and has been coming for years.

And who’s paying to refill that oxygen cylinder? And the petrol?
Leeching goodwill.

The patients that used to be on trolleys in hospital corridors are now in ambulances outside the hospital. It is a terrible situation for paramedics.

I really sympathise Lucy but this is getting very dangerous.In our practice in the Bristol area we had the following in the last few weeks.
1) Patient with fractured neck of femur -waited 9 hours in our surgery, in the end – ambulance service sent a taxi at 9pm saying “no ambulance available”.
2) Patient with chest pain rang 999 from home, no ambulance arrived despite phoning. At 7.30am the ambulance told him to ring his GP, who rang 999 again, and in hosp at 11am -now beyond window of treatment for his non ST elevevation MI.
3) Patient with acute heart failure and AF had to be kept on oxygen to keep sats above 90% in the surgery for 4 hours before ambulance arrived. We were then minutes from running out of oxygen. A further strong call to 999 eventually summonsed ambulance.
What is going on out there? We are being told hospital are not allowing ambulances to offload -but people will die.

i know many patients who have had to take their friends/relatives to hospital with life threatening/life changing conditions by car because “no ambulance was available” (i.e. sitting outside a/e waiting to offload). my son had to take an 82 yr old lady in by car at 2am with a mid shaft fractured femur (spontaneous – due to bisphosphonates) this summer. without exception, the a/e staff have said “you shouldn’t have brought him/her in by car – he/she could have died in the car”.

what exactly are we to do ?

but, of course, it’s not the politician’s problem is it !

A large part of the ambulance problem, as informed by my long-suffering paramedic husband and our ambulance service friends, is that patients dial 111 to ask for advice (often because they cannot get through to GP, which we know is a massive problem, or because they just want straight forward advice that they dont think needs a GP) but due to 111’s ridiculous algorithms get called an ambulance. This is even when the patient (with capacity) states they dont want or need an ambulance, or that they are quite capable of safely making their own way to a&e etc etc. So more patients end up in ambulances at a&e.
111 is not fit for purpose.
Locally, i am told it is triaged by the ambulance service themselves. I am also told that they receive payment for every ambulance sent out. If this is indeed true, there is a massive COI right there.