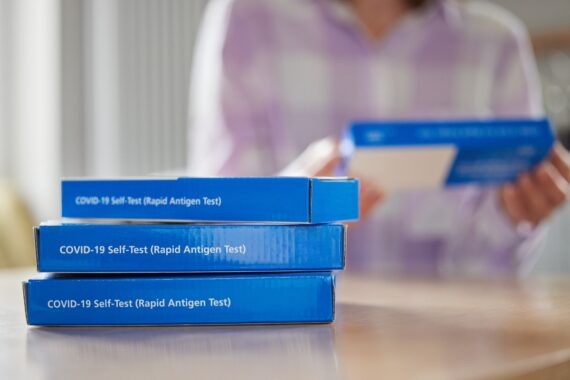 Exclusive GPs are running out of lateral flow Covid tests (LFTs), despite the Government asking the public to leave them for NHS staff and vulnerable patients.

The Government told the public that free LFTs would be available until the end of this month, but the ordering website now says that ‘most tests are now needed for people at higher risk’, adding that ‘some people still need tests to stay safe, like NHS staff’.

Despite the U-turn, Pulse understands many GPs are now struggling to get hold of tests, with those trying to order tests this week being informed that ‘there are no more home delivery slots for these tests at this time’.

Nottingham GP Dr Shan Hussain told Pulse his practice has run out of LFTs and had no choice but to pay for them out of their own pocket.

He couldn’t get any through the Government website so he ordered some online for £24.55 for 10.

He said: ‘We have no choice but to buy them now.’

Mid Mersey LMC vice chair Dr Samir Shah told Pulse: ‘We’ve been individually stockpiling but you can’t get any for home delivery now either so it won’t be long before we have to start buying them.’

He added: ‘They know that I’m a GP on the ordering system, but it says “sorry, no home deliveries”. And that was about three days ago.’

Chief executive of Lancashire and Cumbria consortium of LMCs Dr Peter Higgins told Pulse it is ‘not at all’ fair that GPs are having to pay for tests.

He said that he would advise GPs forced to buy tests to ‘invoice their CCG’.

He added: ‘There needs to be a very clear plan to keep GPs and their staff at work and it needs to be seen as an integral part of the NHS that needs supporting.’

NHS England last month said continued staff Covid testing beyond 1 April was ‘under review’ and that it would write ‘in the coming weeks’ with detail on testing protocols for staff and patients.

However, no such advice has been forthcoming and GP practices remain in the dark about whether they should continue twice-weekly asymptomatic testing from 1 April – and if so, whether doctors and staff will have to fund this out of their own pockets.

The BMA has warned that the health protection measure must not be scrapped, however NHS England board papers released yesterday indicated that no conclusion had been reached concerning funding for continued testing.

One briefing document to the board said: ‘We are currently finalising our financial strategy and arrangements with the [Department of Health and Social Care] ahead of the financial year.

‘This includes a request to identify several hundred million pounds to contribute to the costs of the continued testing regime set out in the Government’s Living with Covid strategy.

‘This is in addition to the other financial risks we face, including increased price inflation.’

The Living with Covid strategy, published in late February, had placed emphasis on the high cost of the testing regime throughout the pandemic, saying this would now have to be reduced, but did not mention what would happen to testing for healthcare workers.

It is not the first time GPs have struggled to get hold of tests, with NHS England telling practices in January that they could access contingency supplies.

It comes amid a huge rise in Covid case numbers and hospitalisations in recent weeks – with NHS England warning that it is jeopardising the elective recovery plan – and as the majority of GPs in England surveyed by Pulse think Covid restrictions were removed too soon.

The UK Health Security Agency did not respond to a Pulse request for comment.

In the name of living with Covid there is no question in my mind that we should abandon asymptomatic testing and that this is a long overdue sign from government that GP premises should not require testing and that we can abandon the pointless theatre of masks except where serious communicable disease is suspected, in which case full PPE including fit-tested respirators should be provided by the NHS for use in separate primary care hot hubs or secondary care premises. Just don’t come to work if you feel poorly.

Totally disagree Brian. We have GPs ANP and reception staff off with Covid. How you feel doesn’t correlate with how infectious you are. Staff with covid need to regularly to show that their levels are dropping. There is good evidence that masks decrease transmission.
We can live with this and continue to wash our hands, and wear masks sometimes -they are not exclusive.

Richard…..I remember a time when high quality evidence such as the “Scandinavian Simvastatin Survival Study” for example was required to change medical practice.
Well designed trials with unequivocal findings from the top of the hierarchy of evidence should be the only sources used.
On that basis, there is NO evidence worthy of the term “evidence” that the mask’s hanging loosely from the faces of my patients, be they cloth or “surgical” reduce transmission in any way.
For clarity, there is NO evidence from clinical trials, including the only 2 randomised trials from Denmark and Bangladesh, where outcomes that claimed a benefit achieved statistical significance.
Therefore the positive outcomes reached are NOT likely to be repeatable and NO MORE likely to have been achieved than by mere chance.

So on that basis, there is no evidence for mask wearing at all. None.