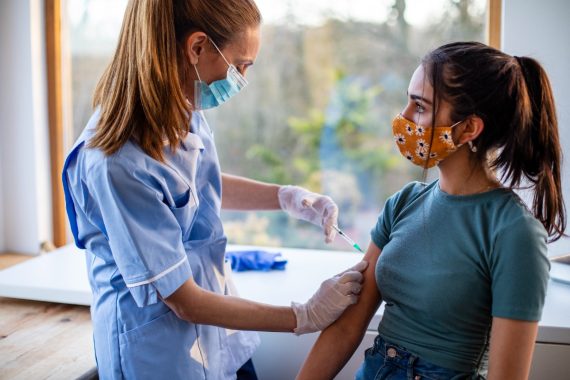 Speaking at a House of Commons Health and Social Care Committee hearing yesterday afternoon, Mr Javid suggested the service could cover ‘other vaccines’ as well as Covid jabs.

Mr Javid told MPs that the approach will be set out in more detail in the elective recovery plan, due ‘in the next few weeks’.

The hearing heard MP Dr Luke Evans, who is also a GP, ask Mr Javid about his approach to NHS being ‘able to scale back up again’ – as it has been forced to do in response to Omicron – noting that it is a ‘tough ask for the staff and the NHS in itself’.

Mr Javid replied that ‘it is a huge ask’, adding that the elective recovery plan will ‘set out’ how the NHS can prepare for ‘living with Covid’, including when it comes to vaccination drives.

He said: ‘What we can’t have every time we’re trying to encourage people to take a Covid vaccine is, we can’t ask GPs to stop doing their regular work. We can’t have that.

‘That can be an emergency response now, but in the future, we’ve got to have a national vaccination service that is able to deal with Covid vaccines as well as other vaccines without drawing in workforce from the rest of the NHS.

‘That’s one thing and the same applies, by the way, to making use of antivirals and testing and having a separate process to deal with that.’

Asked if the service could handle routine vaccinations as well as pandemic emergencies, the Department of Health and Social Care told Pulse the plans were ‘yet to be decided’.

The health secretary’s comments, made as GPs were asked to prioritise the booster campaign over routine care before Christmas, come as the NHS has waited for the Government’s plan for clearing the elective backlog since the Autumn.

It had most recently been due to be published in December, according to previous comments made by Mr Javid to the health select committee.

Yesterday, he said: ‘I was planning to publish it in December, then Omicron came along, so I hope to get it out as soon as I possibly can, in the next few weeks.’

Meanwhile, asked by health committee members about concerns for losing staff to the NHS vaccine mandate, Mr Javid said that the Government is ‘reflecting’ on the matter.

He noted that the Omicron variant is ‘intrinsically less severe’ than Delta, but also ‘more transmissible’ and it is ‘it certainly is [severe] for the 15,000 people in hospital’.

He added: ‘I think it is right in light of Omicron, that we reflect on all this and keep all Covid policies properly under review.

‘And because Omicron is different to Delta, equally we don’t know what the next variant is going to be… but we are reflecting on this.’

According to Mr Javid, it is the ‘professional duty of every NHS worker to get vaccinated’ because ‘the patient’s safety must come first’.

Despite this ‘some people may ultimately not get vaccinated despite whatever information you provide them with’, which will be ‘a cost’ to the NHS.

‘No one wants anyone, not one person, to leave the NHS because of this reason’, he said.

His comments come as the Government this week stood by plans to introduce the mandate from 1 April, while the RCGP called for a delay to the implementation date.

Up to 3,000 GP staff may have to be dismissed, as NHS England guidance said redeployment into non-patient-facing roles is ‘not guaranteed’.

If funded properly Primary Care can vaccinate- we’ll plan and employ staff as appropriate- this sounds like a recipe for waste and poor coverage.
The best most cost effective results always come from a Primary Care led service.

Watch this carefully , In Scotland flu vaccines taken off GPs but some of income lost put back into baseline .
But if flu jab and other vaccine income and QOF removed to fund this it will just leave us with all the unfunded work .
In rural areas unlikely any national vaccination service will provide local access like GPs
NHSE only tend to take work off GPs when they can take the funding with it ( so the IOS items !
Watch the coverage rates plummet if they do so !

Making you think you’re being done a favour. When you gave the favour. And he thanked the Daily Mail for nailing you.

It tends to be the case that when work that like is taken away from GPs it is just done terribly. In fact can you tell me one service which is more effective since it left GP hands?

Is the national vaccination service (run by Crapita no doubt) really going to vaccinate all my vulnerable patients as quiickly as i did?

GPs would very much like you to take back all of the unfunded, uncontracted work first.

If a problem seems shit and unworkable don’t worry along will come a politician and completely feck it up. Yes both you and I can see the upsides and downsides if this comes to pass.

In truth any jabs can be done by an adequately trained workforce. Why does it have to be GP? Come to that cervical screening can go too? Back to the ethos of GP “Those who are ill or believe themselves to be so” and even that dogma can be re-examined?

Look at this as an opportunity. How much would HMG pay for a fully trained WTE GP? Remember recruitment and retention is a major problem currently. Big pow wow needed. I’d be looking at nearer £200k pa. Too high??? I received £135k in 2006 (PMS practice) which adjusted for inflation is £207,000 in 2021.

We need a strategic review. We are massively undervalued. Wake up guys!

Expect vaccination rates to drop, obviously GP funding to drop, but a rise in numbers of vaccination related consultations/other type of contacts or increased demand. Confident that “national vaccination service” will continue to sing the usual nhs song of “ask your GP”

Reply
Unsuitable or offensive? Report this comment
Turn out The Lights 27 January, 2022 10:14 am

One feels an OOH moment coming the service costing 4 times as much with a worse performance and it all being our fault cause it was taken off us lazy GPs.Oh Hum.

National ‘easy patients’ Vaccination Service incoming!
Inclusion criteria: all easy, compliant, mobile, uncomplicated patients.
Exclusion criteria: housebound, frail, a bit ill, a bit of mental health, a touch of learning disability, anyone who can’t be consented in 30 seconds or where some exploration of capacity is needed, any one who has ever wondered if they have ‘allergy’.
Agreed pathway for those excluded: see GP.