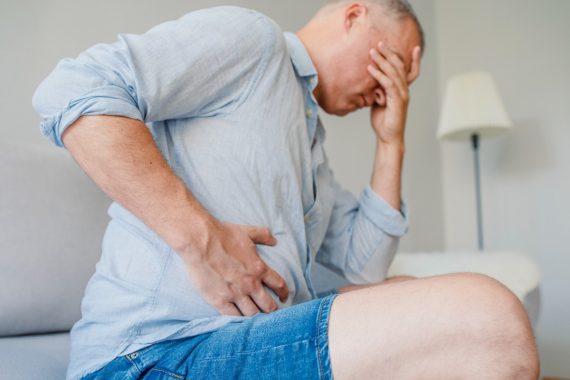 The NHS in England will launch a new campaign on Monday urging patients to come forward for a GP appointment if they have a range of symptoms which could be cancer.

The next phase of the ‘Help Us, Help You’ campaign will use TV and digital adverts, posters and social media to raise awareness of symptoms of cancers in the abdominal area, urological cancers, and lung cancer.

The ads, from NHS England and Public Health England, will feature people with a range of symptoms, such as prolonged discomfort in the tummy area or a persistent cough, and aim to persuade people experiencing these to contact their GP.

But chief executive Amanda Pritchard stressed that there could be tens of thousands more people who are not coming forward, either because they’re unaware of common cancer symptoms, or because they feel they would burden the NHS.

Research carried out on behalf of NHS England in June showed that three in five people (60%) are concerned about burdening the NHS, with half (49%) saying they would delay seeking medical advice compared to before the pandemic.

And, according to the research, many people are unaware of common warning signs of two of the most common cancers – abdominal and urological (accounting for 44% and 41% of cancers respectively).

Three in five (63%) people said they didn’t recognise discomfort in the abdominal area for three weeks or more as an indication of cancer.

Meanwhile, two in five people did not recognise that a persistent cough for more than three weeks as a sign of lung cancer, with NHS England also concerned the symptom could easily be confused with Covid-19.

NHS chief executive Amanda Pritchard said: ‘We know that thousands of people could be risking their lives by delaying medical attention for cancer symptoms.

‘We are open and ready to treat people with potential cancer symptoms. From Monday, this campaign will remind people of the signs and symptoms to look out for and encourage them to get checked if something isn’t quite right.

‘Thanks to the hard work of NHS staff, we are back on track with cancer referrals, diagnosis and treatment so, whether you or a loved one has a routine appointment, or a potential cancer symptom, please don’t delay and come forward to get yourself checked – we would rather see you sooner when any cancer would be easier to treat.’

‘It’s incredibly important that people recognise the common symptoms that can signal a cancer diagnosis – and it’s vital that they take action by making an appointment with their GP, that could ultimately save their life.’

The news comes after Pulse revealed in May that GPs have been hit with raised thresholds for cancer referrals in some areas. GPs were told they must conduct FIT tests before referring patients with suspected bowel cancer to secondary care, against NICE guidelines.

Oh No!——my practice can’t cope as it is ——what with holidays abroad (sorry ill-health)——and how are the poor things going to fit in Practice Meetings —-Staff Training Sessions etc with this influx?
They could employ a locum or two in of course——but they’re too expensive despite being worth their weight in gold
And remember ”fresh faced” locums——these pathetic practices will get you to do anything the incumbents avoid——which is just about everything

Not sure what your ‘axe’ is John Graham Munro but it sure is tedious!

Surprised NHSE aren’t doing a cow’s milk protein, work anxiety, lower back pain and IBS campaign. That would be a sack of laughs.