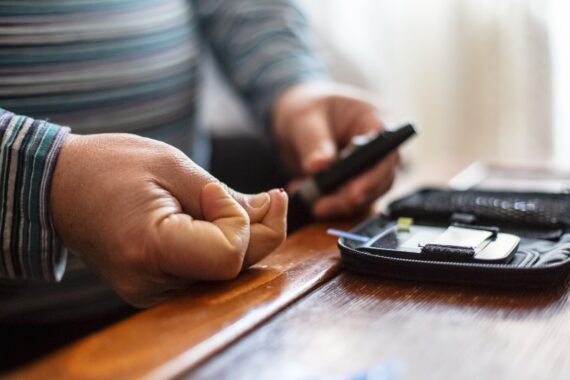 Thousands of people have avoided developing type 2 diabetes thanks to the NHS prevention programme, according to a Government-funded study.

New data suggests that the scheme resulted in a 7% reduction in the number of new type 2 diabetes diagnoses in England between 2018 and 2019, representing around 18,000 people.

The University of Manchester research also showed that completing the nine-month NHS programme reduces a patient’s chance of developing the condition by more than a third (37%), NHS England said today.

It added that almost one million people have been referred to the programme – which provides advice on healthy eating and exercise – since it was first launched in 2016.

Participants who complete the scheme achieve an average weight loss of 3.3kg, it said.

NHS England said that evidence has shown that the national diabetes prevention programme is ‘highly cost-effective in the long term’.

It added that previous estimates suggest diabetes could affect almost 9% of the population – 4.2 million people – by 2030, with evidence showing the NHS spends around £10bn per year on the condition, representing around 10% of its entire budget.

But the UK’s leading diabetes charity warned last year that up to 5.5 million people could be living with some form of the condition by the end of the decade.

Professor of primary care diabetes and vascular medicine at the University of Leicester Professor Kamlesh Khunti told Pulse: ‘We know from modelling studies that screening and diabetes prevention strategies are likely to be cost-effective, but we didn’t have good quality data from the UK.

‘If this does show indeed that it is cost-effective, then that is excellent news.’

Professor Khunti, who is also a GP, previously conducted modelling on the scheme as a member of the NHS diabetes prevention programme executive board before real-world data was available.

NHS national clinical director for diabetes and obesity Professor Jonathan Valabhji said: ‘The evidence is now clear – the NHS is preventing type 2 diabetes and is helping thousands of people to lead healthier lives.

‘Summer 2018 saw England become the first country to achieve universal coverage with such a programme. This latest evidence shows that the programme can have a major impact on peoples’ lives.’

The new research, funded by UK Government agency the National Institute for Health Research (NIHR), is due to be presented at the annual Diabetes UK Professional Conference this week.

Experts are expected to tell conference delegates that the programme will improve the health of ‘hundreds of thousands of people’, NHS England said.

NHS England reported in 2020 that people completing the NHS diabetes prevention programme lost an average of 2kg each, while in 2019 the latest figures showed participants attending ‘most’ of the sessions lost an average of 3.4kg.

It comes as a study has found that adults who recover from mild Covid-19 appear to be at higher risk of developing type 2 diabetes.

And last month, NICE said it has consulted on recommendations to dramatically expand access to continuous blood glucose monitoring devices to all adults with type 1 diabetes and some with type 2 disease.

Primary care experts have called for GP practices to receive targeted investment to focus on diabetic health checks, which they had to deprioritise as the vaccination programme was introduced.

No need to worry the diabetologists about becoming redundant – government have more than made up for the shortfall in NIDDM patients by forcing covid infection on everyone, and it increases the rate of developing diabetes way more than that 18,000. So jobs for life, but life will be shorter for healthcare staff because of the enforced frequent covid infections….

They’ll just get it the following year. Meaningless data.

Those who complete the scheme are more motivated to change their lifestyle than those who do not.
Outcomes are nothing to do with the content of the scheme.
Study appears to have been designed to demonstrate the desired outcome.

Healthy eating and exercise!
Who would have thought of that.