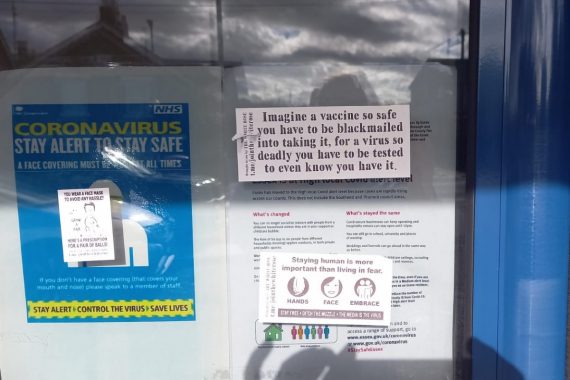 Vandals plastered stickers containing anti-vaccine messages over the front door of a GP practice ahead of it holding a Covid vaccination clinic.

Staff at Mersea Island Practice in Colchester were ‘shocked’ when greeted by the anti-vaccine stickers on Tuesday (4 May), following the bank holiday weekend, and later called out the ‘idiotic and dangerous messages’ on social media.

Dr Amit Tiwari, a GP at the practice, told Pulse that it has been holding ad hoc vaccination clinics to support the programme, with one scheduled on Tuesday, adding ‘I presume word got around that it was happening, which probably triggered the whole thing’.

One of the stickers, attributed to an anti-vaccination group, said: ‘Imagine a vaccine so safe you have to be blackmailed into taking it, for a virus so deadly you have to be tested to even know you have it.’

Another read ‘staying human is more important than living in fear’ and urged people to ‘ditch the muzzle’.

Dr Tiwari said: ‘When you’re trying to do the best thing for the country in the middle of a pandemic, to get that is really quite upsetting, and staff were shocked by it.

‘There is a vocal minority who read information on social media and spread it, and they want people to be aware of their thoughts. I think where we are, fortunately, most people are sensible, but it’s a small minority who make it bad for everybody else.’

The practice, in its social media post, said it was unsuccessful in its quick attempt to remove the stickers, but upon hearing about the vandalism, a neighbourhood watch group turned up and managed to take them down.

The practice’s public statement reiterated ‘a zero tolerance approach’ to the behaviour, adding it ‘feels strongly against the intentions of the perpetrator’.

It said: ‘The intended message on these stickers are aiming to spread idiotic and dangerous messages, with the intention to undermine the huge efforts and success of the NHS Covid vaccination programme.’

This comes as a GP practice serving as a Covid-19 vaccination centre was vandalised with anti-vaccine graffiti messages in February.

Last month, NHS England warned it ‘will not stand for’ disruption by anti-vaccine protesters at Covid vaccination sites, following a demonstration held in Nottingham.

Apart from that, not very newsworthy

Reply
Unsuitable or offensive? Report this comment
Giles Elrlngton 7 May, 2021 10:47 am

I found this newsworthy, as it’s “on my patch”. I am sorry that my hardworking Mersea colleagues had to put up with this.

Reply
Unsuitable or offensive? Report this comment
Paul Hartley 7 May, 2021 10:53 am

Answer these comments with rational counterarguements , not just rage

Reply
Unsuitable or offensive? Report this comment
Not Arvind Madan 7 May, 2021 11:32 am

Why answer at all? Its their choice. Lets focus on those who want to get immunised. They will soon change their mind when they cannot board a flight to Ibiza.

Has anyone tried answering these two statements instead of spending time being outraged?