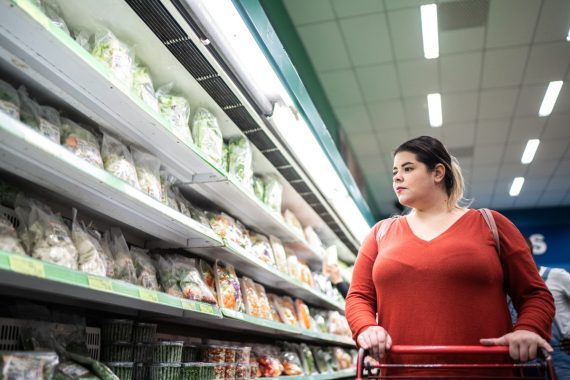 GP practices are referring only 3% of overweight and obese adult patients to publicly-funded weight management services, a study has found.

According to national guidance, adults with a BMI ≥25 (≥23.0 in minority ethnic groups) are eligible for referral to a lifestyle weight management programmes, but the schemes are not consistently available across the country and there is no national registry of non-surgical weight management interventions, so little was known about access to them.

The cross-sectional study used anonymised primary care electronic health records in England from the Clinical Practice Research Datalink and included 1,811,587 adults with a recording of overweight and obesity between January 2007, which coincided with the introduction of national obesity guidance, and June 2020.

This number equated to 31% of the corresponding adult population, researchers noted, yet the Health Survey of England found overweight or obesity in 64% of adults, indicating underreporting/underdiagnosis of overweight and obesity in primary care.

Researchers also found people type 2 diabetes had 11% lower odds of being referred to a programme compared with people without the condition. This might be referred to condition-specific lifestyle programmes instead, but further research was needed to confirm this.

Study co-author Dr Karen Coulman, of Population Health Sciences, Bristol Medical School, University of Bristol, said weight management programmes were known to be effective and national guidance stated that anyone with overweight or obesity was eligible for referral.

‘Our research shows that not only is overweight and obesity being under-reported in primary care but just 3% of those who were given a recorded diagnosis of overweight or obesity between 2007 and 2020 received a referral for weight management,’ she said.

‘We are undertaking research interviews with health professionals and patients to understand the reasons for this.’

She added that the underreporting of overweight and obesity found in the study could be due to several factors including that the requirement to have a register of patients with BMI 30 or over was only added to the Quality and Outcomes Framework in 2017.

Pressures within primary care and the need for more training in obesity for primary care professionals could also be at play.

‘Further research is needed to investigate this finding, however the current Enhanced Service Specification for weight management should help improve recording of weight in primary care,’ she said.

NHS England announced £20m towards the new weight management DES last summer, although this was only for obesity not overweight. Some 97% of practices are signed up to the DES.

Meanwhile, the NHS diabetes prevention programme has helped some 18,000 patients avoid type 2 diabetes, according to a recent study.

Meanwhile, NICE said last month that people should take their own waist measurement to identify if they are at risk of potential health problems.

That’s a weight on my mind

Self referral is the way to go.

Agreed. If commissioners really wanted eligible patients to be contacting services they could create an online portal: patient types in height and weight and is accepted by the service if meets BMI criteria.

Agree self-refer. They know who they are.

The referral process for NHS digital weight management app is crazy – requires filling in a word template, saving it , set up and e-referral, printing / emailing this ,attaching one to other .. and does it really achieve results? In the end the patient gets invited to an app based intervention. Not that surprising that numbers are low.

Way too time consuming a process so doesn’t get done. Self referral is the way to go.