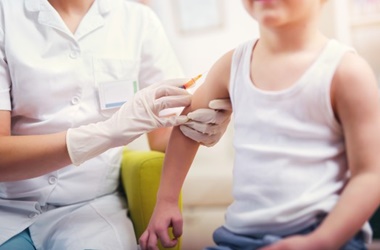 UK public health officials are calling on parents to ensure children have had their MMR vaccines as uptake falls to the lowest level for a decade.

More than one in ten children have not been fully immunised with MMR before starting school with uptake falling to 85.5% for two doses by the age of five years.

Uptake of the first dose of the MMR vaccine in two year olds has also dropped below 90%, the latest figures show.

But the Joint Committee on Vaccination and Immunisation also noted ‘vaccination fatigue’ was impacting routine jabs.

The 85% uptake for two doses falls well below the World Health Organization target of 95% needed to achieve elimination of measles.

A Government-commissioned survey of 2,000 parents also suggests many are not aware of the risks measles poses, with almost half not aware that measles can lead to serious complications such as pneumonia and brain inflammation.

While the NHS has continued to prioritise routine vaccinations throughout the pandemic, one in 10 parents whose child was unvaccinated said they didn’t realise the NHS was still offering appointments or did not want to be a burden to the NHS.

‘It is incredibly important that all parents and guardians ensure their child is up to date with their routine vaccinations, including MMR, as these vaccines give children crucial protection against serious and potentially deadly illnesses and stop outbreaks in the community.’

‘GPs and our teams have worked incredibly hard to ensure childhood vaccinations have continued to be available throughout the pandemic. If any parents did not come forward during the crisis, for whatever reason, we would encourage them to make an appointment for their child to have the MMR vaccination as soon as possible.’

Dr Simon Hodes, a GP in Watford, said the figures were worrying.

‘I think this reflects a drop off in visits to general practice, which we have seen for many long term conditions.

‘The reasons are complex and the pandemic has played a part in affecting the provision of and focus on non-Covid conditions.

‘Don’t forget that the UK was classed as having eradicated measles by the WHO in 2017, and then lost its elimination status in 2018 due to rising case numbers – so the MMR issues long predate Covid.’

He added that parents needed to know it was never too late to catch up with MMR.

Dr Lis Galloway, a GP in Surrey said the vaccine rates in their practice were currently stable ‘largely due to a proactive and very public pro-vaccine stance from our whole team’.

‘When doctors use their position of authority to further an anti-vaccine agenda (for whatever reason) they undermine people’s confidence not only in the Covid vaccination, but in all UK immunisation programmes.’