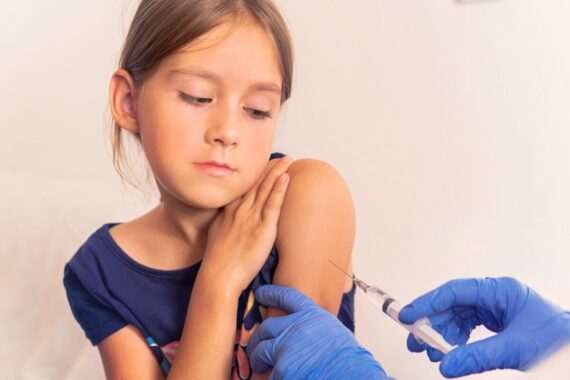 Only 7% of children aged 5-11 have so far been vaccinated against Covid in England, official data has revealed.

The latest NHS England weekly data on Covid vaccinations, published last week, revealed that 346,924 children aged 5-11 had received one dose as of 8 May.

This represents 7% of the almost five million who are eligible, according to Office for National Statistics (ONS) population estimates published as part of the data.

Bookings had opened five weeks earlier, when all children aged 5-11 became eligible for the vaccination on 4 April.

However, patients must wait at least four weeks after any Covid infection before they can receive the vaccination.

The data also revealed that London has the lowest uptake rate at 5.2%, with the North West second lowest at 5.7%.

The South West and South East achieved the highest uptake at 9% and 8.8% respectively.

In February, the Government announced that all children aged 5-11 would become eligible for ‘non-urgent’ Covid vaccination in England, Scotland and Wales, following new advice from the Joint Committee on Vaccination and Immunisation (JCVI).

The Northern Irish Government also announced it would extend the offer of the jab to children who were not in at-risk groups.

The Covid jab rollout to all 5-11s began in Northern Ireland, Wales and Scotland in March.

Children aged 5-11 who are in a clinical risk group or a household contact of someone who is immunosuppressed have been eligible for Covid vaccination since a JCVI recommendation was accepted across the UK at the end of December, with GPs starting to deliver jabs in late January.

The age group is being offered two 10-microgram doses of the Pfizer/BioNTech Covid jab at least 12 weeks apart – or eight weeks apart for those in at-risk groups or living with someone who is immunosuppressed.

NHS England had previously said that primary care networks (PCNs) would not be expected to lead on the vaccine rollout for five-to-11-year-olds, due to ongoing workforce pressures.

It comes as data has revealed that just 31% of black pregnant women were vaccinated against Covid between November 2021 and January 2022, compared to 58% of white women.

And vaccine leaders urged those eligible to come forward for the vaccine as soon as possible as around one in five over-75s have not yet received a spring Covid booster jab.

Earlier this month, NHS England urged practices to help identify immunosuppressed and housebound patients who are eligible for a spring Covid booster but have not yet received one amid low uptake.

The guidance on the government website states 12 weeks post covid infection for vaccination (https://www.gov.uk/government/publications/covid-19-vaccination-resources-for-children-aged-5-to-11-years/a-guide-for-parents-of-children-aged-5-to-11-years) so seeing as infection was rampant in primary schools in January/February (both of my children were affected and finally are able to be vaccinated this week) I am really not surprised that uptake has been so poor.