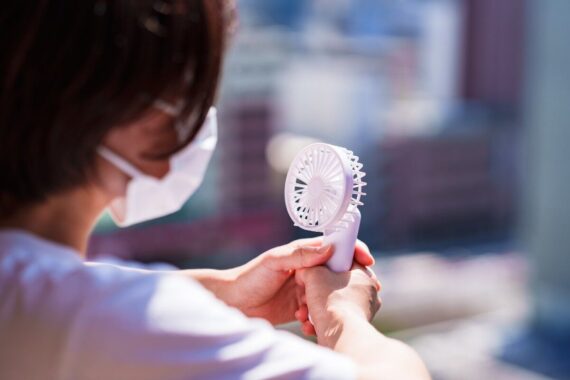 One in 19 people had Covid in the UK last week, with the virus spike set to coincide with an extreme heatwave.

In all, 3.5 million people were estimated to have been Covid positive last week in the UK – 5.2% of the population.

Meanwhile, the Government has issued a level 4 heat-health alert for the first time ever, with possibilities of temperatures reaching 40C in some parts of England early next week.

The alert ‘indicates that a severe heatwave could have impacts beyond health and social care with potential effects on transport systems, food, water, energy supplies and businesses’.

Advice issued includes checking that medicines ‘can be stored according to the instructions on the packaging’.

Professor Penny Endersby, chief executive at the Met Office, said: ‘This is the first time we have issued a Red National Severe Weather warning for Extreme Heat and the first time 40C has been forecast in the UK. In this country we’re used to treating a hot spell as a chance to go and play in in the sun. This is not that sort of weather.’

It comes as outside of England, the Covid incidence rate was even higher – at 1 in 16 in Scotland and 1 in 17 in Wales and Northern Ireland, the latest Office for National Statistics report showed.

This was up from 1 in 25 people who had the virus in the UK the previous week.

The latest Government advice says that ‘patient-facing healthcare staff who have symptoms of a respiratory infection, and who have a high temperature or do not feel well enough to attend work, are required to take a lateral flow device (LFD) test as soon as they feel unwell’.

However, GPs told Pulse most practices were getting on with the job despite the latest wave – including some doctors cancelling holiday in response.

Northumberland LMC lead officer Dr Jane Lothian told Pulse: ‘I hear intermittently that practices have had to send six staff home because of Covid, or a GP is off because of Covid. It is affecting practices but [GPs] have got so used to it that they’re not making a fuss about it.’

She added: ‘Partners are having to roll up their sleeves at times when they would have otherwise been off. And God knows if it goes on over the summer, what are [GPs] going to do? Are they going to go on their summer holidays? I don’t know. I just worry we haven’t got to peak holiday season and I just hope people go away and get a break.’

The NHS has also not seen a huge rise in hospitalisations with Covid despite the spike.

Currently, 14,816 people are hospitalised with Covid, including 175 in ventilation beds. This compares to over 38,000 patients who were in hospital at the January infections spike.

The ONS said the rise in cases is being driven by the BA.5 and BA.4 versions of the Omicron Covid strain, accounting for around 70% and 20% of cases respectively.

The ZOE symptoms tracker study has concluded that the Omicron variant is milder than previous strains and triggers different symptoms.

Omicron ‘is associated with a lower risk of hospitalisation and shorter duration of illness in the vaccinated population than previous variants’, the King’s College team said. It is also less likely to lead to long Covid.

The researchers said this is because Delta was ‘better at infecting lung cells than Omicron, which enters other mucosal cells’.

The top two Omicron symptoms were a sore throat and a hoarse voice, while anosmia was much more rare than with the Delta strain.