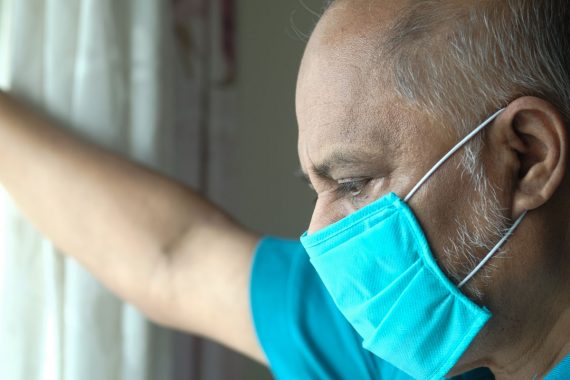 Researchers have pinpointed a gene that doubles the risk of respiratory failure from Covid and which is significantly more common among South Asian patients.

The high-risk version of the gene is present in more 60% of people with South Asian ancestry compared with 15% of people in white European ancestry groups, partially explaining the ongoing high death rate in this population in the UK, the University of Oxford researchers said.

It raises the potential for novel treatment targets as the genetic variation is linked to a response in the lung rather than the immune system.

But also reinforces the importance of vaccination and take up of booster jabs in South Asian groups, experts said.

It is thought that the previously largely unstudied gene prevents the endothelial lining in the airways and lungs from responding to the virus properly.

The study, published in Nature Genetics, builds on previous work which found a specific stretch of DNA on chromosome 3 doubled the risk of adults under the age of 65 years dying from Covid-19.

The researchers said it had been hard to track down the exact genetic signal responsible because it was not linked to a difference in gene coding for a protein but rather a difference in the DNA that makes a switch to turn a gene on.

They used a combination of artificial intelligence and traditional genomics approaches to hone in on the specific gene that was being controlled to increase the risk of severe Covid-19.

Known as LZTFL1, the gene shows increased expression in those at higher risk but the fact that pulmonary epithelial cells seem to be impacted rather than immune cells, means that people with carrying the gene should respond normally to vaccines, the researchers said.

Study co-author Professor James Davies, who worked as an intensive care consultant during the pandemic and is an associate professor of genomics at Oxford University, said: ‘The genetic factor we have found explains why some people get very seriously ill after coronavirus infection.

The higher risk gene identified by the team cannot explain completely explain the higher death rate reported in Black and ethnic minority communities as only 2% of those with Afro-Caribbean ancestry carried the higher risk genotype, the researchers noted.

‘The higher risk DNA code is found more commonly in some black and minority ethnic communities but not in others,’ said Professor Davies

‘Socioeconomic factors are also likely to be important in explaining why some communities have been particularly badly affected by the Covid-19 pandemic.’

Dr Raghib Ali, independent expert adviser on Covid-19 and ethnicity to the Race Disparity Unit at the Cabinet Office, said the study contributed to ongoing efforts to understand the causes of the higher death rates and poorer outcomes from Covid-19 in some ethnic groups.

He added that the higher death rate seen in ethnic minorities is primarily due to their higher risk of infection, which is driven by their higher likelihood of living in densely-populated urban areas, in larger and multi-generational households and working in public-facing roles including health and social care.

But ‘there has been an unexplained residual excess risk in South Asians even after taking these risk factors into account’, he said.

‘Other studies from Public Health England, ISARIC and ICNARC have also shown that South Asians (and Bangladeshis in particular) – but not Black groups – have worse survival.

‘This study, as well as others, show that this may be due to them being more likely to carry this gene which increases their risk of death once infected.

‘Vaccine uptake has been high in South Asian groups but this study reinforces the importance of taking the booster doses now to maximise their protection and reduce their risk as immunity is now waning.’

I am surprised by the dramatic headline for this “discovery”.

Covid-19 is caused by an immune overreaction to infection with the SARS-CoV-2 virus, otherwise known as a cytokine storm. This syndrome can be caused by a number of triggers, including other coronaviruses. Furthermore there is a genetically-determined form which occurs in _Bangladeshis. This has been known for 30 years. Anomalies in both chromosome 3 and chromosome 19 have already been identified as risk factors.

I pointed this out as far back as July 2020 – and indeed, on the basis of the known genetic form of cytokine storm syndrome, suggested that there was an important genetic element in April 2020. It is quite clear that almost no-one has read the textbook on cytokine storm syndrome. Genetic element? Tick. Myocarditis? Tick. Renal failure? Tick. Thrombotic thrombocytopenia? Tick. Response to steroid? Tick. Value of tocilizumab? Tick. Kawasaki-like features in children? Tick. Chilblains? Tick.The book (by Randy Cron and Edward Behrens) was published in 2019 – before the current pandemic, and it is all there. I simply cannot understand why clinicians have not managed to put two and two together and continue to make “discoveries” that are not new, and also do trials on drugs that are already known to work, thus wasting valuable time. Those “experts” making decisions are,quite clearly, the wrong experts.