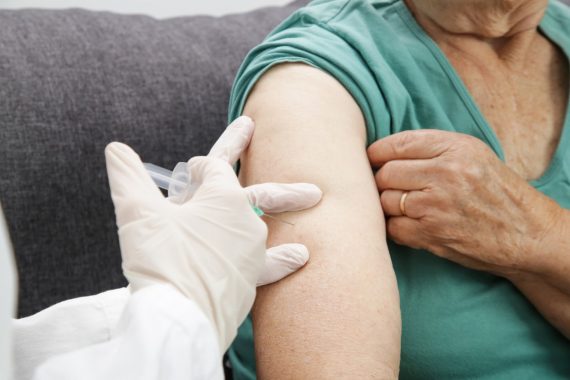 It is the first vaccine candidate to show ‘statistically significant and clinically meaningful efficacy’ in adults over 60, GSK said, following a randomised placebo-controlled trial of 25,000 volunteers across 17 countries.

With ‘no unexpected safety concerns’ observed during the trial, engagement with regulators will ‘start immediately,’ GSK said, with the aim of applying for approval for the vaccine later this year.

The ‘magnitude of effect’ observed during the trial, which tested the efficacy of a single dose of its adjuvanted RSVPreF3 OA investigational vaccine in adults aged 60 or over, was ‘consistent across RSV A and B strains, key secondary endpoints and in those aged 70 years and above’, it added.

There is currently no approved vaccine for RSV. RSV vaccine development began in the 1960s with an ‘unsuccessful formalin-inactivated RSV (FI-RSV) vaccine that induced a severe – and in two cases lethal – lung inflammatory response during the first natural RSV infection after vaccination of RSV-naive infants,’ the World Health Organization (WHO) said.

‘The concerns over the FI-RSV vaccine hindered the development of alternative RSV vaccines for many years,’ the WHO explained, but in recent years ‘increased understanding of the biology of RSV and associated technological advances’ have ‘resulted in the entry of multiple vaccine candidates into clinical development, some of which may receive regulatory approval in the near future’.

In April this year, for instance, Bavarian Nordic announced the start of a phase III RSV vaccine trial in older adults, with results expected next year.

‘RSV remains one of the few major infectious diseases without a vaccine, and these data have the potential to meaningfully impact the treatment of RSV and may reduce the 360,000 hospitalisations and more than 24,000 deaths worldwide each year.

‘Given the importance of these data, we plan to engage with regulators immediately and anticipate regulatory submissions in the second half of 2022.’

The trial will continue to evaluate both an annual revaccination schedule and longer-term protection over multiple seasons following one dose of the RSV older adult vaccine candidate, GSK said.

RSV is a common contagious virus affecting the lungs and breathing passages.

‘It is one of the major remaining infectious diseases for which there is currently no vaccine or specific treatment,’ GSK said.

‘Older adults are at high risk for severe disease due to age-related decline in immunity and underlying conditions. RSV can exacerbate conditions including COPD, asthma and chronic heart failure and can lead to severe outcomes, such as pneumonia, hospitalisation and death.’

While there is currently no approved vaccine for RSV, the monoclonal anti respiratory syncytial virus F protein antibody palivizumab can be given as a series of monthly shots during RSV season to help protect some babies and young children at high risk for severe RSV disease, the Centers for Disease Control and Prevention said.

This comes after the Medicines and Healthcare products Regulatory Agency (MHRA) approved the Moderna Covid vaccine for use in children aged 6-11 in April.

In May, a planned interim analysis of a Phase IIb trial of the Pfizer bivalent RSV prefusion F protein-based vaccine candidate (RSFpreF vaccine) found the vaccine to be safe for pregnant women, and that it elicits neutralising antibodies which transfer to their offspring.