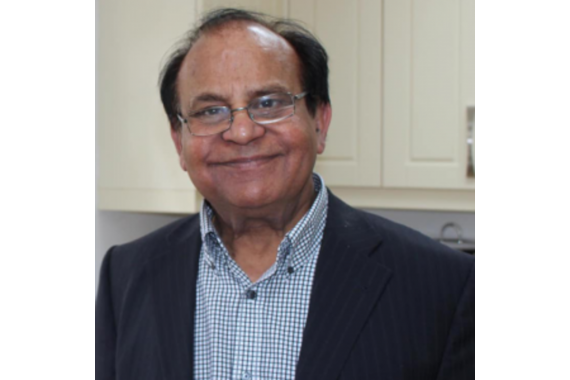 A local community has embarked on a significant fundraising challenge in memory of its ‘much-loved’ GP who died with Covid.

Dr Om Prakash Chawla died on 2 January after testing positive for the virus.

He had spent more than 25 years at Wingerworth Surgery in Chesterfield, Derbyshire, until retiring in 2018.

Paying tribute, more than 70 relatives and friends, including practice colleagues, have surpassed their target fundraising for the town’s Ashgate Hospicecare.

They set themselves the challenge of dedicating the duration of last month to walking, running or cycling a total of 4,444 miles, as this is the distance between Chesterfield and Lucknow, India, where Dr Chawla completed his medical training.

The family had already grown concerned about the hospice losing funding during the pandemic, and hit their initial target of raising £4,444 in the middle of March.

With one participant alone racking up 700 miles, the current total stands at approximately £7,000. They are still accepting donations, and note that many of their patients have continued their fundraising walks.

Wingerworth Medical Practice is family-run, with Dr Chawla’s wife, who remains its senior partner, having created it from a bungalow into a purpose-built medical centre with over 6,000 patients.

Dr Chawla is survived by his wife, two children, including a son who is also a partner at the practice, and four grandchildren.

He was originally a general surgeon in South Yorkshire and fellow of the Royal College of Surgeons of Edinburgh, but decided halfway through his career to help his wife in general practice.

He went onto became an associate fellow in occupational health, working both with the county council and as a GP, never losing ‘enthusiasm’ for minor surgery in particular.

His son, Dr Sudeep Chawla, told Pulse: ‘The practice is one big family, and my dad loved his job.

‘He inspired me to become a GP – medicine is part of the family – and I started working with him 16 years ago. He taught me and other registrars so much – he tried his best for everyone and was passionate about sharing knowledge.

‘Being a part of the community means a lot to us – my children’s school has also taken part in the charity event. My dad would have been exceptionally proud of what we’ve achieved so far.

‘A local farmer told me there’s one way to remember my dad – as a lovely gentleman always with a smile on his face. We set up an email account where people can offer messages of condolence, and have had over 200. He was a happy, loving man, both in the profession and as a father, husband and grandfather.’

The mission has gone appreciated by Ashgate Hospicecare, which shared its ‘delight’ at being chosen to be supported.

It added: ‘We massively rely on the hard work and support of our supporters organising their own fundraisers, so we can be there for the families who need us. What Sudeep, Tara and the other 70 fundraisers have achieved is nothing short of inspirational.’

The news comes as 16 other GPs have died with Covid, with Pulse profiling each one and running tributes to them here.

All except two were of Black, Asian or minority ethnic (BAME) origin.