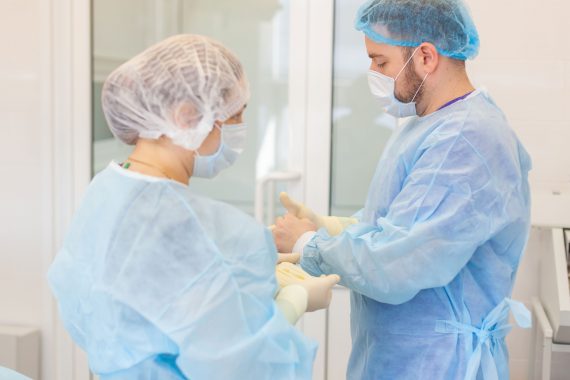 A new report by the National Audit Office (NAO) has revealed a Government estimate that 195 million items of PPE it has procured are ‘potentially unsuitable’.

It comes as GPs in the South West of England have been sent ‘used’ gloves in a ‘significant’ PPE hygiene blunder – the latest in a string of fiascos with official PPE provided to practices.

In a report investigating the supply of PPE during the pandemic, published today, the NAO revealed that ‘most’ types of PPE have had ‘problems with compliance with technical standards’.

The report said: ‘The Department [of Health and Social Care] told us that it had identified 195m items which were potentially unsuitable, which was equivalent to around 1% of the items it had received to date.

‘However, it has not provided us with sufficient information to be able to verify these figures because, it told us, this would compromise its ability to resell the PPE.’

It added: ‘We do not know which suppliers delivered this PPE or whether the unsuitable items we are aware of are included.

‘The Department has not calculated the total value of potentially unsuitable items, but this will amount to hundreds of millions of pounds.’

The report also revealed that while the Government’s Parallel Supply Chain distributed 1,888m PPE items to trusts between 20 March and 31 July 2020, it provided a fraction of this number to GP practices.

The NAO said: ‘The Parallel Supply Chain could barely satisfy local organisations’ requirements because of the time lag between ordering PPE and it being available to use.

‘Of the 32bn items of PPE procured between February and July, only 2.6bn items were delivered to front-line organisations in that period. Demand for PPE was so high in April and May that stock levels were negligible for most types of PPE.’

The supply chain only reached the point of ‘holding at least one day’s worth of stock across all PPE items for the first time’ at the end of May, it added.

Shadow health minister Justin Madders said: ‘This report confirms that frontline workers didn’t have access to adequate PPE early on in the pandemic, putting them at unnecessary risk. There is no doubt that a significant reason for the shortage was the Government’s failure to prepare properly and take on board warnings about PPE stockpiles.

‘As we head into a second wave over the busy winter period, it is vital that ministers learn from mistakes from the first wave and ensure that protecting those staff who risk their lives for us at work, in both the NHS and social care, is a priority.’

Committee of Public Accounts chair Meg Hillier added that the Government was ‘far too slow to recognise how precarious the [PPE] position was’.

She said: ‘The national stockpile was nowhere near big enough for a coronavirus outbreak – a consequence of the pandemic plans’ fixation on influenza.

‘When the penny finally dropped DHSC had to scramble to buy what was left as prices went through the roof.’

It comes as Pulse revealed yesterday that GPs in the South West of England have been told to ‘immediately’ stop using a batch of PPE that has been distributed locally, after finding that a number of protective gloves were ‘clearly used’ upon delivery.

Pulse previously reported that practices across the country had been supplied with expired face masks that had concealed ‘best before’ stickers.

And in June, the Government issued an alert telling GPs to throw away batches of out-of-date face masks distributed to practices after finding they posed a ‘risk to staff’.

Meanwhile, in August, GPs were told to ‘immediately’ stop using certain non-sterile PPE gowns supplied by the Government after some batches did ‘not meet minimum standards for fluid resistance’.

And earlier this month, GP practices in Scotland were sent ‘official’ PPE aprons made from ‘repurposed bin bags’.

you dont have to make it up!