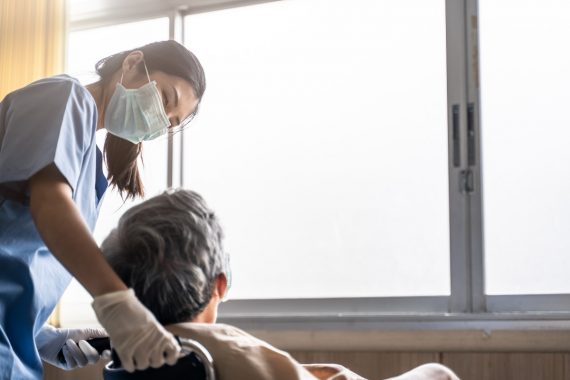 A second monoclonal antibody treatment has been approved in the UK for preventing hospitalisation in high-risk patients and is being made available immediately, said health officials.

The MHRA approved Sotrovimab (Xevudy) for people with mild to moderate Covid-19 who are at high risk of developing severe disease.

It is given as an intravenous drip and needs to be started within the first five days of treatment. NHS England said it would be rolled out to the most vulnerable patients through Covid Medicine Delivery Units (CMDUs) alongside the antiviral drug molnupiravir or the novel monoclonal antibody Ronapreve.

Trial data suggests sotrovimab reduces the risk of hospitalisation and death in high-risk patients with Covid-19 by 79% and early data from manufacturer GSK suggests it is effective against the Omicron variant.

Advice from one CMDU pathway suggested sotrovimab would be the option of choice in patients with Omicron.

NHS England said 1.3 million of the highest risk patients – including those who have received organ transplants, many cancer patients, and those with Down’s Syndrome – are eligible to receive the treatment, if they test positive following a PCR test.

Those who cannot have the treatment or attend a clinic for it to be administered may be offered molnupiravir instead as an oral antiviral that can be taken at home.

Professor Stephen Powis, NHS national medical director, said: ‘From today the NHS is offering the latest cutting-edge, lifesaving treatment to the most vulnerable people with Covid via a national roll out of sotrovimab.

‘With molnupiravir, these treatments represent another weapon in our arsenal to reduce the risk of patients at highest risk becoming seriously ill and needing hospitalisation from Covid.’

He added that along with the booster vaccination programme these treatments provide further reassurance that ‘the NHS is doing everything it can to protect the most vulnerable’.

The NHS said that over the coming weeks, patients eligible for monoclonal antibodies and antivirals will be contacted by the NHS to alert them to the new treatments and they will also be sent a PCR testing kit to keep at home to use if they have symptoms to speed up access to treatment.

So far, 70 CDMUs have been set up, mainly in hospitals, to assess patients and GPs should also have received local guidance on how to refer to them if needed. It is expected that most patients will be contacted directly.

The over 50s and over 18s with pre-existing conditions who get a positive test are also being asked to sign up to the the PANORAMIC national study which is collecting more evidence on the effectiveness of antivirals.