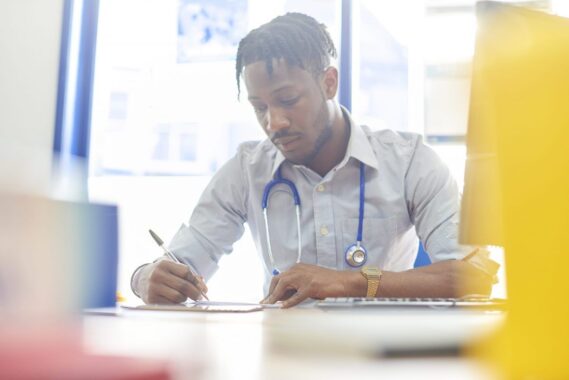 A medical degree apprenticeship scheme has been ‘approved for delivery’ and could start from September next year, it has been announced.

The scheme, which has been met with scepticism from doctor unions, will see students employed for the duration of their medical degree, doing ‘on the job’ learning through clinical placements alongside attending medical school.

Last July, Health Education England (HEE) launched a consultation on a proposed doctor apprenticeship scheme with the aim to roll out the programme from September this year.

According to the Institute for Apprenticeships and Technical Education, an employer-led organisation sponsored by the Department for Education, the apprenticeship has now been ‘approved for delivery’.

However, it added that it does ‘not anticipate any starts until at least September 2023, as it will take providers at least a year to prepare for delivery’.

The apprenticeship will have a ‘typical length’ of 60 months and will include the Medical Licensing Assessment, allowing apprentices to apply for ‘provisional registration’ with the GMC and a place on a UK foundation training programme on completion, the Institute said.

It added: ‘On completion of the apprenticeship and subject to satisfactory confirmation of fitness to practise by the GMC, progression will be into the foundation programme to undertake a further higher-level programme of workplace-based, supervised training before they are eligible for full registration with the GMC and able to progress to further speciality training posts.’

Entry requirements for the ‘Doctor Degree’ apprenticeship will be ‘agreed between the employer and the medical school’, it said.

HEE said the apprenticeship ‘will help in the recruitment of doctors and aid in attracting people from currently underrepresented groups into the profession’, including in ‘under-doctored areas’.

HEE medical director for undergraduate education Professor Liz Hughes said: ‘At present, there are many barriers that exist and which hold back talented people.

‘An apprenticeship could help to change that, whilst maintaining exactly the same high standards of training.’

She added: ‘The Medical Degree Doctor apprentice will do all the training, including the degree, and meet all the professional standards as someone on the traditional route, they will attend the same universities, do the same exams and graduate with the same qualifications.

‘Following completion of the apprenticeship, they will do further study and specialty training on the same programmes as medical school graduates.’

However, the BMA said that ‘many questions remain about the place of medical degree apprenticeships in the UK medical education and training landscape, and the role they will play in responding to the medical workforce crisis’.

A spokesperson: ‘It remains to be seen whether future apprentices, medical schools and employing organisations can navigate the complexity of implementing medical degree programmes to meet individual apprenticeship needs, while adhering to the exact same high standards of training experienced by traditional medical students.’

They added: ‘It [also] remains unclear whether medical degree apprenticeship places will be provided in addition to or within the current restrictive Government cap on medical school places.

‘The medical training pipeline is already stretched to its limits, with lecture halls at capacity, limited numbers of clinical placements, and falling numbers of medical academic staff.’

A ‘rapid’ decision to ‘significantly expand and increase investment in’ medical education and training is ‘urgently required’, the BMA said.

The spokesperson added: ‘While we welcome innovative approaches to education and training, there must be no illusions about the limited impact medical degree apprenticeships will have in solving the dire NHS workforce crisis.

‘A dramatic increase in traditional medical school places to meet the projected future demand on the health service is needed without delay.’

In April last year, Doctors Association UK members voted unanimously to oppose the new scheme due to reports it would have a heavy primary care focus.

The union raised concerns about inadequate training and warned that GP trainers would lack time to train apprentices.

And in September, doctor leaders attending the BMA’s 2021 Annual Representative Meeting (ARM) passed a motion calling on the BMA to reject the proposals ‘outright’ and lobby instead for ‘increased accessibility for financial support’ for students.

Bring back YTS, bound to work!

Those of similar age will recall “student locum” in my old medical school. Basically cheap holiday cover & involved 4th and 5th students. Probably questionable even then so how the hell??

Doing actual work, lots of patients contact rather than the “reflecting” and computer tickboxing as with the RCGP model; looks good.

who are the employers taking on the apprentices ? is this going to be a bit like Dyson university who have successfully done this with engineers

60 month to create apprenticeship. This is duration for medical degree with proper education. If lack of places for medical student is the reason then these candidates can be trained abroad to get proper medical degree.. it is a lot cheaper there.

I was taught a lot at university but almost all of it was unnecessary, never used or wrong. The apprenticeship model can train GPs without the unnecessary palaver, probably cheaper, and a lot more relevant. We need to expand GP numbers FAST and this seems a reasonable way of going about it.

For ‘provisional registration’ with the GMC. The same shady regulators that’ll kick you out over not having adequate training.
JOKES.

I think they will be called “Apothecaries” and the govt will say, “Well, you’re not really traditional doctors , so we’ll pay you half as much.
LMSSA anyone?

the only useless bit for me was biochemistry. the rest came in useful, even if it was years in remembering some neuroanatomy for a specific presentation of symptoms etc. We often don’t do enough thinking from first principles but given the first principle training at least gives us that option. Might not use it often, but for the more complex stuff it can save lives.