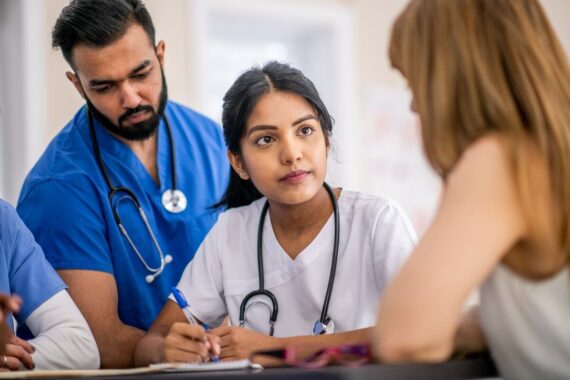 Exclusive Up to 1,000 overseas GPs could be at risk of being deported despite completing their UK training because of complex immigration rules that mean they are unable to extend their visas, GP leaders have warned.

BMA Welsh council chair Dr David Bailey said the Home Office ‘needs to address’ the issue, which he described as ‘absurd’ and a ‘short-sighted piece of bad legislation’.

The issue was highlighted by the Welsh BMA’s GP committee, which said 30 of the country’s 80 trainee GPs who qualify this summer did not have sponsorship, but the impact is being felt across the whole of the UK.

Home Office rules state that foreign doctors must work under the skilled worker visa scheme for at least five years before they can apply for indefinite leave to remain (ILTR) and this timeframe covers most specialist medical training.

Health Education England (HEE) told Pulse it was not able to say how many international GP trainees would be affected, but said there are around 1,000 trainees on visas which will expire by the end of March 2023.

It added that not all of those will be facing possible deportation, because they are not all guaranteed to gain a CCT due to factors such as exam results.

NHS England had expected to be allowed to sponsor the doctors during the two-year period but could not reach an agreement with the Home Office.

The Home Office said it was now working with the Department of Health and Social Care (DHSC) to try to increase the number of GP practices with licences to sponsor newly-qualified trainees.

Dr Bailey said fully-trained GPs were being put in an impossible position in which they were unable to compete in the workforce in a fair manner.

He said some newly-trained GPs were leaving the country as a result while others were potentially at risk of exploitation because their options were so limited.

Dr Bailey told Pulse: ‘It’s a problem faced by all four nations that needs addressing by the UK Home Office.’

‘When you are training for most specialities in the UK it’s usually for more than five years so you are covered by the deanery essentially throughout that time.

‘If you are in GP training and you come over brand new you will do a three-year training scheme. The deanery will cover the sponsorship for that time but then once you have actually got your CCT, which the taxpayers have paid for to the tune of about £250,000 apiece, you are on your own.

‘You can’t apply for ILTR until you have been in practice for five years, which means there’s a two year gap in which you have to be sponsored for a tier 2 visa.

‘Each nation thought it could sponsor them for two years but unfortunately the Home Office doesn’t see it quite like that and has essentially said the sponsor has to be someone with supervisory capacity.

‘Now we have fully-qualified GPs who are having their options in terms of employment severely curtailed because they can’t be sponsored effectively by a Government office.’

BAPIO chair and GP trainer Dr Kamal Sidhu told Pulse: ‘This is an issue that affects all parts of the UK and sadly, the workforce needs have generally not been in harmony with the populist anti-immigrant narrative.

‘Some areas have encouraged their practices to apply for a licence to be able to sponsor GPs. However, often the very practices who are in dire need of the workforce are the ones who will have little capacity to go through any bureaucratic steps such as this.’

Dr Sidhu added: ‘GP federations or groups of practices have attempted to help each other but the barrier is still there and is also a major source of worry and expense for those who have just finished training.’

He said it would ‘massively help the system and hence the patients if such processes are streamlined and made least cumbersome’.

BMA GPC England chair Dr Kieran Sharrock said: ‘The BMA has repeatedly called for the Home Office to address the long-standing issues around sponsorship for GPs so that they can train and work in England without interruption or having to experience stressful uncertainty over their immigration status.

‘However, we know that many trainees on completion of training are still struggling – particularly those who are seeking sponsorship from smaller GP practices.’

He warned the situation ‘means that many trainees can’t put their new skills to good use and rather than risk compromising their immigration status have to take up non-clinical roles, work in hospital medicine or in some cases, leave the country altogether’.

‘This deprives general practice of talented doctors, and patients who desperately need our care.’

He added: ‘Government says it wants to fix the NHS workforce crisis, but there are some very simple solutions that are staring them in the face and can be implemented now. Making it easier for trainees from overseas who have trained in the UK to continue to work here is one of them.’

A Home Office spokesperson told Pulse: ‘Workers from overseas make an invaluable contribution to our NHS, helping to keep vital services running and save lives.

‘Trainee GPs from overseas can continue to renew while in the UK, but GP practices must have a valid sponsorship licence.

‘If they do not hold this licence, then it can create delays in people being able to apply to continue working here.’

It comes as almost 800 applicants are on the ‘reserve list’ for foundation training this year, after not being allocated a placement for FY1.

MPs’ immigration debate has real implications for the NHS

I wish them a healthy, productive and successful life abroad. Truly. And for the NHS, stop stealing the world’s workforce.

BCUHB in North Wales are recruiting GPs for managed practices and out of hours services. They would be happy to sponsor applicants. bcu.primarycarerecruitment@wales.nhs.uk