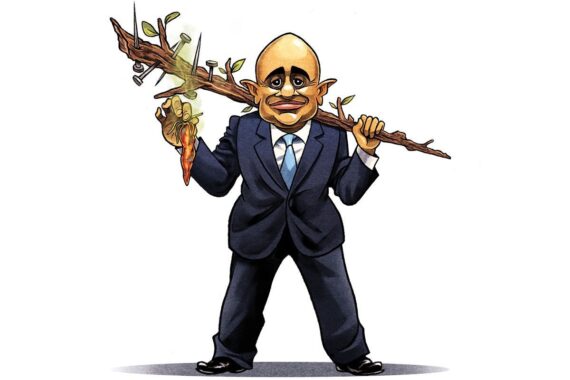 Health secretary Sajid Javid will be setting out a ‘plan for change’ for primary care, as the current model is ‘not working’, he announced today.

Speaking at the NHS Confederation Expo conference, Mr Javid said the first priority would be pharmacy, with plans to be set out ‘shortly’.

He said: ‘I’m grateful to all primary care staff who make a difference to millions of people every single day, but I don’t think our current model of primary care is working.

‘That won’t be a surprise to you. You know, and I think patients know, and everyone working in primary care. We need a plan for change. We’re starting with pharmacy, but I will be setting out my plan shortly.’

Speaking earlier today at the same conference, NHS chief executive Amanda Pritchard also expressed that ‘the current model of general practice isn’t working as well as it should’.

She said: ‘GPs and the rapidly growing team of other primary care professionals provide treatments and advice and support to more than a million patients every day.

‘But it’s clear, isn’t it? That the current model of general practice isn’t working as well as it should.’

In March, Mr Javid backed a report that recommended phasing out the GMS contract by 2030, with the majority of GPs contracted by scaled providers such as hospital trusts.

And landmark review led by Claire Fuller last month recommended that urgent same-day appointments should being dealt with by ‘single, urgent care teams’ across larger populations rather than the patient’s own GP practice.

GPs could be incentivised to work under hospital trusts, reports claim

No amount of reorganisation is ever going to change the two main reasons that primary care is struggling; not enough doctors and FATPOA.

The current model of general practice isn’t working because the entirety of the NHS has been vastly underfunded for the last decade!

We saw the results of these plans on BBC Panorama yesterday. Ugly, unsafe plans. Check out Centene.

All engineered by NHS England and the revolving door between these companies, NHSE, and government. This is a predetermined agenda and not a/any/appropriate response to the GP and NHS crises.

The plan: what his mates in America want – basically you out, managers in and more of this Operose type scandal and vertical integration.

Instead you will get a 104 page wish wash of the above.

THE USUAL CRAP…..HOWEVER I FOR ONE WILL BE BLOODY HAPPY TO WORK FOR UP TO 120K PER YEAR AS A GP AND LEADER….SALARIED AS PER JAVID’S PROVISIONAL PLANS……AT 37.5 HOURS PER WEEK……RATHER THAN 95K PER YEAR FOR 60 HOURS PER WEEK TRYING TO PROP UP A SERVICE THAT SHOULD BE ALLOWED TO FAIL………MIGHT CRACK OPEN THE CHAMPAGNE TONIGHT AND THANK THE DAILY NUTTER……YES SOME GPs IN POSH AREAS EARNING BIG MONEY WHO NEVER SEE THEIR COMMUTER BANKER PATIENTS WILL BE HACKED OFF BUT FOR THE MAJORITY OF US WHO GET BULLIED, SHOUTED AT AND ABUSED “BECAUSE IT IS FREE” WILL BE CELEBRATING………

Possibly. But if your solution involves paying even more tax then count me out.

As for large teams dealing with acute problems in patients they do not know, this is stupid. There is a reason my local global chain coffee shop keeps a local team that knows the customers and that is that knowing your customers improves your service.

My local hospital trust is always in crisis, cannot innovate and “needs improvement”. My practice (similar to others) is under a lot of pressure, but not in a crisis, continuously innovates, and has no troubles with the CQC. Why on earth would I want to work for the hospital trust?

The more primary care becomes top-down managed, the more it will not work.

It’s excellent that this man, with his wealth of experience in the health care sector is reforming something that’s been going for decades.

They probably haven’t even got around to putting his name on the office door.

What could go wrong?

Tom Ruston, the underfunding and dismantling of general practice has been progressing for 3 decades not just the last one. It started in 1989 with the development of the 1990 Red Book changes because Kenneth Clarke thought GPs were overpaid – he famously quoted GP earnings as gross not net without mentioning expenses, and quipped about “GPs nervously feeling their wallets” whilst altering the pay structure to make taking on new GP partners without a significant pay drop for all the partners virtually impossible. Clarke and all subsequent health secretaries simply did/do not understand that the work output and efficiency of a traditional GP makes them far cheaper overall than employing ever increasing numbers of noctors, and that the situation will continue to deteriorate unless GPs are again given true recognition, which is unlikely to happen. The Government will eventually attain its goal of a fully salaried service which process was started in 1990 without ever admitting that if General Practice had been allowed to flourish as it was we would not be in this disastrous situation.

Don’t suppose the BMA have thought about a”Plan for Change” during those three decades!

The BMA have a plan (it’s just Hush Hush for the present —-three decades).

How about starting with patients who think the NHS is there to solve their entire being.

1 – why have a jumbo jet on a runway with only half a dozen asylum seekers on board for a several thousand mile flight ? a commercial airline wouldn’t do it – they’d wait till the plane was full.
2 – why build a super dooper new railway line halfway across england that will (even when working properly) only shave minutes off a journey – especially when the trains you currently have are equipped with wi-fi, and punters can work while travelling anyway (if their work is that essential).
3 – why have a pile of PPE that is a-ineffective, and b-not used during the pandemic, and is then subsequently destroyed
4 – why (admittedly this was in wales), have a public enquiry about the newport by-pass that cost so much money there wasn’t any money left to actually build the by-pass you eventually decided on.
5 – why have a massive excercise (several actually) to plan for a MERS-style coronavirus outbreak, and then not put into action the conclusions you have reached to minimise the consequences (with massive financial consequences, not to mention the massive loss of life).

just a few examples – i could go on and on and on, but those in charge of the purse are not even listening, and i do have a few small jobs left to do on my 1939 wolseley that i started restoring during lockdown, when i was prevented from working by a government that refused to give me my vaccine in a timely manner !

The vast majority of NHS Trusts are currently moving from black alerts – to ones with multi coloured rainbow effects and stars.

The queue of ambulances outside outnumbers the A&E is a clear reflection of how many hours over the 4 hour A&E target most trusts are.

The trusts are full to the brim and sending home patients who are unable to walk, talk and even swallow, and forget diagnosing, fixing , and returning them to their pre-morbid state – just read NHS England’s right to reside plan, as this is not accidental.

Handing over primary care to NHS Trusts to run is like giving an alcoholic the keys to the bar and trusting them to run it while you go on a 6 month sabbatical – just don’t expect that you will find anything in a fit state on your return.

Handing NHS trusts GP clinics will not fix the lack of trained staff in the NHS. Yes I value my allied health professionals and they do a great job filling in the gaps, but the complex cases left need the experience of GPs and soon there will be even less to stick their fingers in the breaking dam, and there will be a failure of services in part of the country soon.