PCNs may not be right vehicle for at-scale GP working, RCGP chair suggests 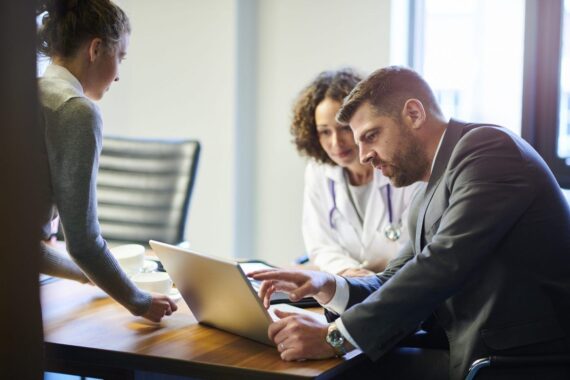 The chair of the RCGP has suggested that PCNs may not be the right vehicle for at-scale working in general practice.

Professor Marshall made the comments following his keynote address, after Pulse questioning about whether he feels PCNs are the ‘right vehicle’ for upscaling.

He said: ‘I don’t know the answer to that. PCNs are definitely where NHS England’s head is so I’ve got no doubt they will continue.’

However, he added that PCNs are likely to ‘adapt’, in particular around their size.

He told GPs: ‘I think there’s a constant search for the right size of organisation, [which] depends on what you’re trying to achieve.

‘But whether the 30-50,000 is big enough is a question in my mind, simply because it dilutes the leadership and management capital that they have. So there might be an argument for slightly larger.’

PCNs are going to be the ‘main voice of general practice’ in emerging ICSs from July and Professor Marshall’s ‘biggest concern about PCN is whether they are mature enough and strong enough’ for the role, he added.

Outlining the RCGP’s ‘vision’ of ‘what general practice will look like in the future’, Professor Marshall said that larger-scale working is ‘inevitable’ but ‘largely a good thing’.

He said: ‘The old cottage industry – the old corner shop practices that used to exist in isolation that did an amazing job serving their local communities – simply can’t survive in the kind of environment that we’re operating in now.

‘We need to have an infrastructure that provides good HR support, data, quality improvement activity, that supports research, training, education and greater accountability. Small practices simply can’t do that.’

He added: ‘The front end of general practice – what patients experience – needs to be local and personal. That’s what general practice is and we’ve got to really work hard to deliver that. But behind that, we’re going to see larger-scale organisations.’

He said: ‘However hard we try – and we’re all trying hard, whether it be the College, the BMA, the LMCs and many others, to get general practice into a better place quickly – I think the reality is that things aren’t going to get better quickly.

It comes as the BMA has encouraged practices to consider their participation in the Network DES after NHS England rejected proposed amendments to the contract.

Professor Marshall’s keynote address also warned GPs that there is a ‘real threat’ that general practice will face the same fate as dentistry in the UK – where a growing number of practitioners have gone private.

And he said that the long-standing row over the shift towards remote consulting in GP practices has now ‘settled down’.

Meanwhile, former health secretary Jeremy Hunt told delegates in his own keynote address that the QOF should be scrapped, with metrics continuing to be measured.

Is working at scale really the way forward.

If anyone fancies a research project – how about a detailed analysis of the top 100/ 500/ 1000 practices in the GP patient survey and see what populations are involved. My prediction is:
– smaller more personal practices
– close to their communities
– not a practice run directly by a large commercial organisation (virgin or similar)
– not a practice run by vetical integration with a hospital
– not a practice in a large mega-surgery of 50-100k patients or more.

I’ll tell you what their plan is – if you don’t already know or realise.

– sell you into a PCN: “working together”
– you sign up out of fear
– you in reality lose your voice, not gain one
– ICS arrives
– impose mass contact variations through it
– you cannot escape your PCN
– you base your practice on false monies
– eventually link it PCN to an anorexic GMS
– remove your named list
– get rid of your receptionists
– pool the area under a hospital led directive
– have a central receptionist
– break continuity; encourage free movement
– locum/salary model.
– you go private and compete.
– system goes to pot
– no longer the NHS.

Dear Martin
Stick your PCN, and stick your Working at Scale into any personal orifice of your own choosing.
Hugs, kisses.

Reply
Unsuitable or offensive? Report this comment
Turn out The Lights 27 April, 2022 9:31 pm

Do the RCGP want to make GPS extinict?

The problem to my mind is the monolithic thinking about general practice; that scale is the only parameter that can be adjusted.

Like many other relatively small practices, we outsource functions such as HR to much larger outside organisations. Many of us also use externally provided templates for QOF work and smears, for example. These external suppliers have a far greater depth of resource than any PCN or superpractice could provide. It is therefore quite incorrect to think of small practices as cottage industries.

Rather than building bigger organisations through costly and distracting practice mergers and takeovers, which divert NHS funds to lawyers and accountants, or cobbling together practices in PCNs, which are hard to manage, I suggest the solution is further innovation in large provider companies that can support practices with functions like technology, protocols and training.

Spot on Andrew Fripp. The obsession with scale being the solution to GP difficulties is delusional. We have all worked at scale in Hospital Trusts whilst training and seen the hierarchies in action: not particularly impressive to say the least. The idea of the anonymity and depersonalisation that will invariably come with scale with salaried PCN-automatons working to rule fills me with despair.

I thought the purpose of PCNs was for the resilience of general practice. Or so we were led to believe in 2019

The last time I looked, “the main voice of general practice” to represent us within an ICS, lies with the LMC.

Do the college and GPC actually talk to each other about this sort of stuff?

No Shaba, they don’t. Neither the BMA or RCGP can speak for all GPs as not all Gps are members of their organisations.
We work in a monopsony market. https://www.youtube.com/watch?v=X88x5RLRKAU resulting in less staff and lower wages. Our single customer is HMG and they dictate what they want based on political and economic whim. The BMA and RCGP are relatively powerless to do anything about this.
Crunch time coming – either accept the direction of travel of many many years to larger, less personal, MDT working primary care or do something different. This involves risk of course and I suspect the current generation will not be prepared to take that on – despite the bluster on social media.
As for the LMC being the main voice then this will vary as LMCs indeed vary. Some may succeed in this but some will not. They need to be a voice of general practice but an ICS will be unlikely top accept them as the main voice.

Just so you know that I’m not out of the loop and that I’ve got this on my radar I thought that I’d touch base to let the team know that we should circle the wagons as I’m sure that we all want to work at pace, whilst embracing the delta, nailing it with blue skies thinking whilst embracing the paradigm review to benchmark the scalability and going forward to get ready for a strategic re-balancing of our aspirations to pro-actively deliver deliverables on disruptive customer value throughout the scheduled, re-structured granular market life cycle of free-space, risk managed, buzzword free what the actual f*** ?

Working at scale is not General Practice; it is yet another attempt at a means to an end. Unfortunately I think the end is probably now in sight. If it has now come to the point of the RCGP promulgating NHSE’s stance then really it is now time to re-brand and re-name General Practice into the “something else” it is fast becoming.

PS. This of course means that the RCGP will need to rebrand as well… Royal College of Something Else?

90% of NHS consultations for 8% of the budget. What are we trying to “fix” here.
And following NHSE’s blind assumption that any organisation works better to scale when the quango is living proof this is not the case.
Wonder why RCGP is blindly following NHSE’s line?
Anyway hopefully GPs themselves and BMA GP committee are not so dumb.
Practices need a bit more funding.
To do even more of the NHS work as the rest of the system is so inefficient.
Secondary care workload dump. Fine we will do what we can. Will need a bit more funding. Cough up.
Additional roles, multidisciplinary working?
Why are we trying to get GPs to do specialist work and everyone and their uncle to do GP work.
Nowhere else in the world is trying to change healthcare and medicine to this model.
My husband is an electrician. No one tries to get him doing plumbing or plastering. Because he is trained to be an electrician.
The clue is in the name.
Our community pharmacies are sinking. While PCNs and GP surgeries nick the pharmacists.
We have nicked our orthopaedic physio for the PCN so he can sit in our practices and do the same job but there are no actual increased numbers of workforce overall. Doctors, nurses, pharmacists, physios and paramedics. A fixed number, too few and we move them around the system. Ludicrous.
Here’s a radical idea. Why not let everyone do the job they are trained for.
Let pharmacists work in the community pharmacies. Paramedics in the camped ambulance services. Physios in community and hospital physio departments.
Fund General Practice properly, I guess 3% of NHS Budget will do. it. That it from pointless NHS England’s 15% of the budget for 0 consultations.
Then, here’s the really radical bit….
We can pay for more receptionists so the patients phone calls get answered!!!!!!!!! Radical.
And more GP clinics, so GPs can have longer appointments and do the job properly.
Do you know we probably already have enough GPs for the workforce.
But the 12 hour+ days with 50-90 patient consultations and back breaking paperwork, with th impossibility of making patient care decisions every couple of minutes, fearing a mistake every second. Means the vast majority of GPs cannot work full time without the risk of instant burnout or negligence.
If the government/NHS England funded surgeries properly (not PCNs, surgeries) I should imagine we could sort out better primary care services within weeks.
Dreaming in Devon.

That’s far too sensible for any representative body to accept @Finola ONeill.
Good quality General Practice is no longer their aim.

Oh I don’t know. I just want to be able to do a good job.
But with (soon) 2 children in Oz, there’s only 3y left to keep me here until no 3 leaves school.
Why should I stay with the awful awful pressures?
Sorry if that leaves even fewer docs, but I’m not sure I can do it much longer.