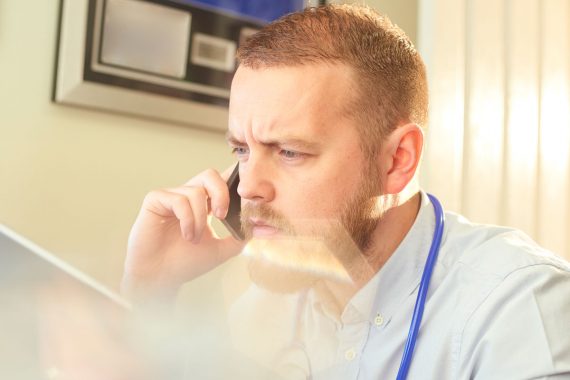 Exclusive The NHS 111 Covid helpline is set to be stood down later this month because it is no longer needed, with GPs working on the service set to be offered the chance to move to NHS 111, Pulse has learned.

The Covid Clinical Assessment Service (CCAS) was set up as an expansion of the NHS 111 service at the start of the pandemic to offer further triage to Covid-19 patients for whom the 111 algorithm cannot determine whether hospitalisation is required.

When it was set up, a call was put out to retired GPs to take calls., and around 500 retired GPs joined the service, with the total number of GPs estimated at around 1,700.

The GPs working for the CCAS have now been told by the South Central Ambulance Service (SCAS), which runs the phone line, that it ‘will not be offering shifts beyond the 23 May’ due to falling numbers of Covid calls.

However, in a letter to CCAS clinicians sent last week, the ambulance service did add there may be ‘other opportunities within the service’ so that the NHS can ‘retain their skills’.

A spokesperson for the SCAS told Pulse this might include the potential for GPs working in the CCAS to continue working within the core 111 service.

The letter added that SCAS is working with NHS England to ‘confirm the next steps’, which could be agreed as soon as early this month.

Suspicions were raised about the future of CCAS last autumn when GPs working for the service told Pulse they believed the telephone hotline was moving towards a more general clinical assessment service ‘on the sly’.

NHS England refuted the claims at the time, although recent board papers – which outlined plans for patients to pre-book A&E appointments as part of the new ‘NHS 111 first’ service – had also revealed plans for the ‘potential development’ of the CCAS.

SCAS’s letter to CCAS clinicians, seen by Pulse, said shifts for the telephone line would be stopped from 23 May because ‘the level of Covid demand on CCAS can be absorbed by the NHS 111 teams at a local level’.

It said: ‘We are aware that many of you will have committed to this work and want to secure alternative opportunities as the number of shifts reduces. We also know that the NHS is keen to retain your skills and there may be other opportunities within the service.’

The letter added: ‘As soon as we have [NHS England’s] decision, we will be writing to you individually to inform you of available options, or to serve you formal notice of the closure of this service.’

Dr Martin Wilkinson, a GP who returned from retirement to work for the CCAS, told Pulse that there have been discussions ‘going on in the background’ about having GPs triaging patients for A&E becoming a ‘normal’ fixture within NHS 111.

He said CCAS clinicians have been told in webinars hosted by the service that they may have the option to continue doing triage work with 111 – in particular as part of the 111 First service – although this has only been discussed ‘in vague terms’.

Dr Wilkinson told Pulse: ‘The options would be to go back to general practice for some people who are interested in doing that, but also there is talk about it [having] been such a success having GPs triaging patients for Covid, they’re thinking about making that part of the normal NHS 111 service – although I think it will be more on a localised basis than a national basis.’

He added: ‘The thinking is that the GPs may be used on the [111 First] side of the service, more for triaging people to relieve the hospital side of things – although obviously the GP practices themselves need a lot of help and support because they’re certainly overloaded at the moment.’

But he warned that if the scope of the service broadens, clinicians working for it will need further training – especially those who have come out of retirement.

He said: ‘When we’re just looking after Covid and you’re looking after more or less the same thing, it’s quite safe because you’ve got a limited scope, but as it broadens now, we probably do need a bit more training and updating.’

The scope of what is being considered remains unclear, but a spokesperson for SCAS stressed that GP triage is already part of the NHS 111 service.

They added that options for continuing opportunities for CCAS GPs are being reviewed, including the potential for ongoing work within the core NHS 111 service.

It also remains unclear what impact the closure of the CCAS will have on the requirement for practices to keep one appointment in every 500 free for direct booking from 111, which is currently set to lapse on 30 June. However, NHS England declined to comment.

Over the summer CCAS stopped nurses and allied health professionals – such as paramedics – from handling patient calls after an audit revealed more than half did not pass safety criteria.

GPs working for the service later approached Pulse to share concerns that its scope was being quietly expanded – including that it was being ‘morphed’ into the 111 First service.

Shortly after 111 First’s launch, GPs warned that acutely ill patients requiring emergency care are being diverted to their practice via the new call-before-you-walk A&E triage system.

Meanwhile, a safety investigation into NHS 111’s response to people calling with potential symptoms of Covid-19 during the pandemic was launched in March.

From current call-waiting times, it would appear that there is certainly a need for such people to answer 111 and 119 calls, and I am sure they would be better at it, with the breadth of GP knowledge, and the fact they have years of experience before all this digital mumbo-jumbo came along. They will give good advice, unlike computer algorhythms and non-clinical telephonists.

Reply
Unsuitable or offensive? Report this comment
David jenkins 5 May, 2021 11:58 am

in the past 40+ years i must have given thousands of vaccinations. i cannot give covid vaccine because “i haven’t been trained”. i cannot get trained because i cannot complete the application form. i cannot do this because………….i cannot provide proof of my “o” levels that i took in 1966 ! apparently three medical degrees, and a cambridge physiology degree count for nothing !

do, please, get in touch if you need a locum. i’m still allowed to see sick patients, just can’t immunise them !

if you think this is a sensible way to run the show, then crack on – i’ve finished my morning coffee now, and it’s back out to the workshop !!

Are there people mad enough to work for NHS 111 if they can afford not to?

What is the role of 111?
To tell the public to take calpol, go to the pharmacy or call an ambulance for imminent death? Oh yes – and book in urgent “within six hours” GP requests. The more you create, the more you waste. This country is addicted to sickness.